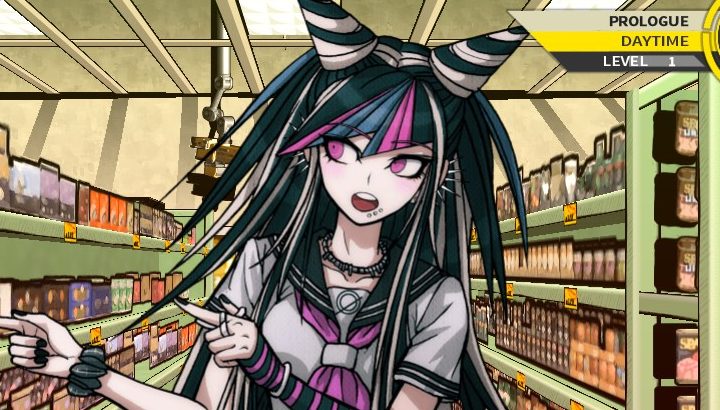 Danganronpa 2: Goodbye Despair begins similarly to the first game, except on a more positive note. Sixteen new students from the Hope have taken a class trip to the beautiful tropical Jabberwock Island, though all have lost their memory. A stuffed pink rabbit named Usami claims to be their teacher, though, and begins a game that fosters hope and friendship. That is, until Monokuma pops up, pummels Usami (and renames her Monomi) and begins the same “kill or be killed” scenario as before. 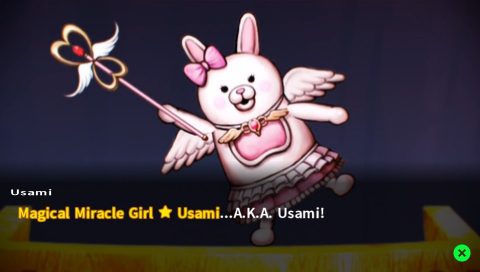 Danganronpa 2 obviously requires that you’ve completed the original game. Storyline details that were huge plot twists in the first game are revealed fairly casually early on here, even though there are almost no direct references to the original game, at least at first. As the game continues, it eventually reveals and expands upon all of the dangling threads left as cliffhangers. Though playing the first game is mandatory, the second game is easily the superior one, and this lies primarily with the characters. There are definitely some similarities between some of the students, but their personalities are more fleshed out, and in many cases, much more ridiculous.

Akane Owari is similar to Aoi in that she’s an athlete with dark skin and an ample bosom, but her love of food is taken to much more comical extremes, and she’s much louder and more active. Chiaki Nanami’s soft spoken attitude is similar to Kyoko, except she routinely drops references to obscure retro games in her conversations. Hiyoko Saionji is a bit like Celeste in that her cutesy demeanor hides a nasty attitude, but her overt meanness is exaggerated even further. Overtly ruffian Nekomaru Nidai might seem like gang member Mondo, except he’s also always talking about taking a dump. The parallels are not lazy storytelling, but are meant to intentionall subvert the expectations of the player, leading them up to one conclusion then swinging in another direction. 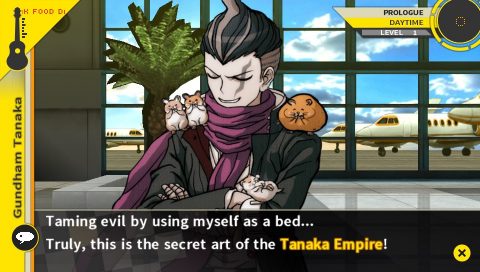 Nagito, the Ultimate Lucky Student, is one of the most important factors of the game. Like Byakuya, he’s incredibly intelligent, often leading everyone else in the right direction during trials. But while Byakuya was unlikeable because he was a pompous jerk, Nagito is unlikeable because he is flat out crazy. He proclaims to be obsessed with the ideal of hope, and is devoted to creating situations where he thinks hope shines through. He’s chaos of the worst variety, because his morals usually put him on your side, but he’s unpredictable enough that it could change at any second.

The setting is also much more interesting, at least visually. The original Danganronpa used distinct color schemes to mark the different floors, but ultimately there’s only so many locales you can use in a school/prison. The tropical island not only allows for brighter, more attractive visuals, but also a greater variety of areas, including a grocery store, a movie theater,a creepy motel, an amusement park, a futuristic city, and others. 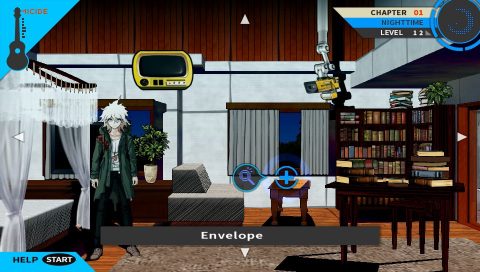 Like the first game, there are numerous references to bits of pop culture, Japanese or otherwise. Titty Typhoon, the name of the night club, was inspired by the Titty Twister bar from From Dawn Till Dusk. Monokuma often beats up Monomi with assorted attacks, most of which are references to Jojo’s Bizarre Adventure. Chiaki drops numerous references to obscure retro video games (see the bottom of the Danganronpa 2 spoiler page for some of these, but only after beating the game!), while Sonia digs up references to actors and situations from 70s Japanese television shows. The Japanese title, Sayonara Zetsubou Gakuen, is a reference to the anime/manga Sayonara Zetsubou-sensei.

The navigation is also a little easier. Jabberwock Island is broken down into five separate, smaller islands, each connected by a single central hub. Walking about the island is represented from a side-scrolling perspective, as your character walks on a circular path around the island. Only the larger areas (particularly the area by your cottages and the hotel) allow you to roam around freely in the first person perspective, so it’s much more focused. You can still warp almost anywhere via the map on the menu screen. 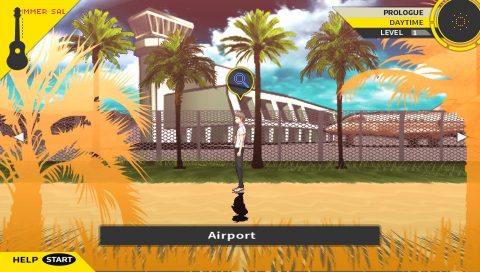 A few other small things have changed. Every time you complete a Free Time segment with someone, you’ll obtain a Hope Fragment, which is used as currency to buy skills for the trials. This lets you pick which skills you want to buy, although you still keep other unique skills when completing various characters’ Free Time events. Additionally, instead of arbitrarily giving coins when examining certain items, you’re challenged to find Monokuma dolls hidden throughout. Running around and accomplishing objectives also increases your “level”, which affects your influence/focus bar and how many skills you can equip. Once you get all of a characters’ Hope Fragments, then you get a super special gift – their underwear.

Much of the music is reused from the original game, which is a little disappointing, but there are still plenty of new tracks, primarily the new school life and investigation pieces, and they are all excellent. Of particular note are the laid back tropical themed exploration tracks, which combined with the surreal landscapes, hearken back to Flower, Sun and Rain, an early Suda 51 title Masafumi Takada also worked on. The trumpet-led investigation theme is particularly stylish, especially with its rock rearrangement during the climactic chapter.

There have also been some changes to the courtroom games. In the argument segments, in addition to spotting potential contradictions, which are highlighted in orange text, you can also agree with certain phrases, which are highlighted in blue. In the rhythm battles (now called Panic Time Action), you need to hold down the X button and release with the beats, instead of repeatedly tapping it. 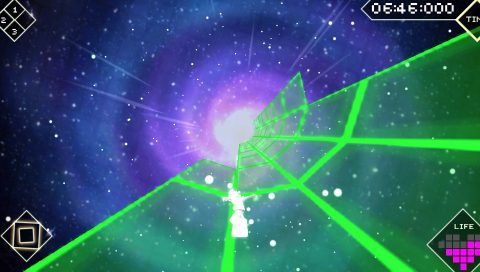 There are “sword” battle segments, where you either use the touch screen or the analog stick to “cut through” the words of your opponent, slicing them down before you can launch a counter argument. The “truth bullets” are converted into “truth swords”, which you can similarly use to cut down certain phrases, although since they’re faster paced, they’re usually a little simpler than the standard argument sections.

The “Improved Hangman’s Gambit” has changed so letters slowly appear as gems floating across the screen. You can pick up and move gems however you want. If two gems of the same letter collide or are placed together, then they can be used to guess the next letter in the phrase. If different letters collide, they explode and you take damage. It’s more engaging than the original game, but it’s also slower, and it’s almost impossible to keep track of all of the letters without them exploding. 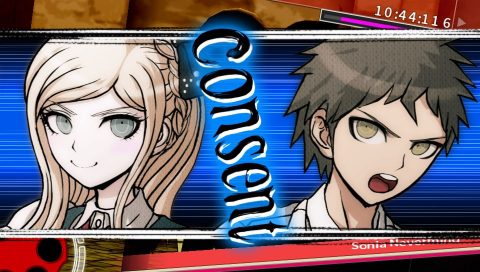 Also new are “skateboarding” segments called Logic Dive, where you surf down your own synapses (yes, it’s very strange) and dodge obstacles, then pick certain branching paths when trying to come to a conclusion for an argument. If you pick the wrong one, you’ll careen off into the void, but they’re also really easy, since you can see the correct path when you fail. Compared to how intense the other minigames are, this one is relatively slow and laid back.

The comic book panel assembly is also handled slightly differently. You’re given a number of panels at once – four on the standard difficulty – and you need to place down a few of them before you’re given another hand. They also give descriptions to both the blank space and the panel, making it easier to figure out what does where. You’re also given immediate feedback as to whether your attempt was correct, instead. 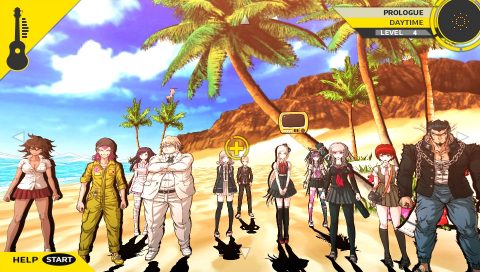 Danganronpa 2 is a better game than its predecessor for any number of reasons: the setting is more interesting, the characters are more likeable, the mysteries are better, the story doesn’t teeter over the same cliffhangers (though still leaves enough questions unanswered to make one look forward to the next entry), and the twists are even crazier, full of innumerable “OH SHIT” moments. Some moments may disappoint – the executions aren’t quite as memorable (with some exceptions), some of the new mini-games aren’t that great, and not all of the plot revelations are satisfactory, but these are small marks against a fascinating game.

After completing the game, an extra mini game opens up starring Monomi. At the beginning of the main story mode, Monokuma unveils the Monobeats, a collection of beastly robots armed to the teeth with weaponry. However, their only real purpose is to act as roadblocks between the other islands. As you proceed through the chapters, Monomi mentions that she’s destroyed various Monobeasts offscreen, allowing you to further explore the island. This minigame lets you play these segments, as the fat little pink rabbit plays dressup like a magical girl. It’s a clumsy and not particularly fun game, even though it’s neat in concept. There’s also a minigame featured a Tamagotchi-like pet, who evolves into different forms based on the items you give it and how often you clean its poop. 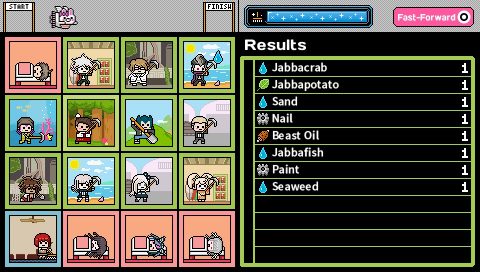 Included with the Vita version of Danganronpa 2 is Danganronpa IF, a light novel by author Ryougo Narita. It presents an alternate retelling of the original game, if certain things progressed a little differently, most noticeably the death of the first character. It really brings out a different side to this story, this character was barely developed, and makes for a fantastic read. It’s presented like Chunsoft sound novels, with text overlaid over a static background, with music played over it. There is also another simulation mode called Island Life, which works identically to School Life in the Vita version of the first game. 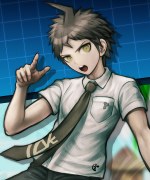 The protagonist of the second game. Like Makoto, he seems to lack any real talent, but his personality is a little more upbeat. 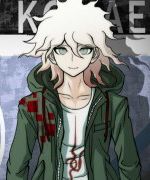 An unnerving student who fetishizes hope above all else, often alternatively planning scenarios that act both for and against the student’s favor. Everyone else is, understandably, incredibly creeped out by him. 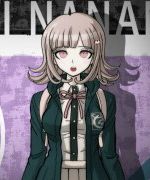 A fan of retro games who often seems on the verge of taking naps. Softspoken but smart, often helping in investigations. 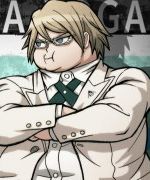 Byakuya returns from the original game, except he seems to have gained several hundred pounds, and appears to have no memories of his previous run-in with Monokuma. 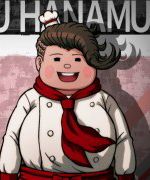 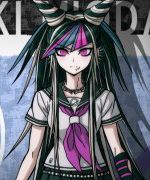 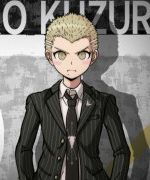 Fuyuhiko’s baby face betrays the spirit of the brutish gangster that lies beneath. 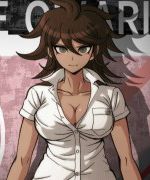 A hot blooded student who acts first and thinks second. Form a bond with Nekomaru over their passion for sparring. 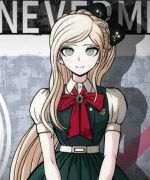 A princess of the small kingdom of Novoselic, and a foreigner amongst the other Japanese students. Despite being a little naive, she has a deep interest in Japanese culture, as well as being obsessed with serial murderers and the occult. 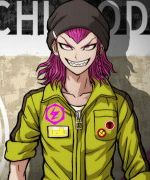 The spiked teeth imply someone fierce, but Kazuichi is a harmless mechanical wizard, with a bad case of “nice guy” syndrome and an unrelenting crush on Sonia. 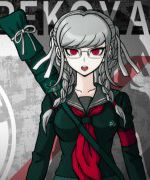 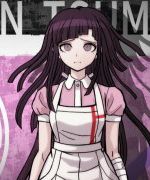 Mikan is, in short, a mess, constantly whimpering, begging for forgiveness for anything small thing she might say or do. Also clumsy to a fault. 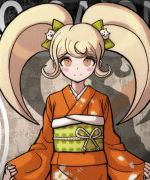 She appears cute and cuddly, by Hiyoko is a huge brat with an incredibly bad attitude, often verbally abusing the other students (especially Mikan) with little provocation. 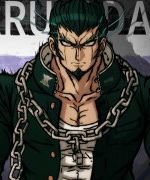 A loud, gigantic, rough and tumble guy, though beneath his rough exterior he’s something of a softy. He has an obsession with the scatological. 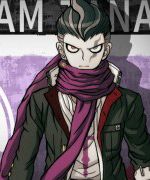 Gundham fashions himself as an evil dark overlord, speaking in a ridiculously overdramatic fashion. He also breeds hamsters, which he refers to as “Dark Devas of Destruction”. 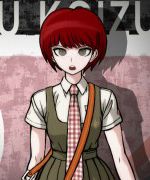 A smart, upbeat girl who excels in taking pictures. 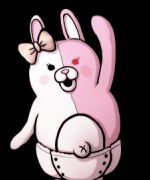 The pink rabbit counterpart who claims to be the student’s “teacher”, she’s constantly bullied by Monokuma, who keeps calling her “little sister” even though she insists no relation. She appears to be on the side of the students, but her motivations seem sketchy and she’s reluctant to divulge any real information.