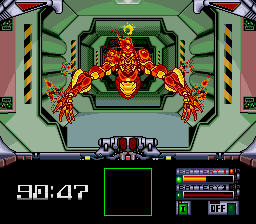 One of the joys of checking out older video games is stumbling across games that experiment with ideas long before they hit the mainstream, with the lack of expectations allowing developers to explore and express those ideas however they liked. One such game is Silent Debuggers, a Data East title that blends the feel of Aliens with dungeon crawler-styled mazes, resulting in a unique if tricky survival horror experience.

In the distant future, expert bounty hunters called “Debuggers” raid abandoned starships in search of treasure. Raiding the renowned Space Station Gane, you and your partner Leon find the place locked down and crawling with dangerous monsters. The only way to escape is to make your way down to the sixth floor at the bottom, and figure out what’s going on. 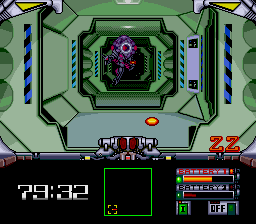 Silent Debuggers initially seems simple enough, in that you have six floors, and you must kill all the monsters on each floor to progress to the next one. You start out in the center, surrounded by eight blocks which serve different functions, and have to venture into the cargo area where the monsters lurk. To find them, you use a sensor that a tone that increases in tempo and changes color as you get closer.

However, there’s a lot more to it. Firstly, you can only carry two of six guns (along with a small pistol), and one of each type: rifles and launchers. Most guns use a limited ammo supply, though a handful use batteries – these can be refilled by heading to the G and C blocks respectively. The ammo storage will eventually run out while batteries can be recharged indefinitely, but batteries also count as your health meter. In other words, using guns with batteries chips away at your health, which can put you into a tight spot.

Thankfully, the game is quite forgiving in this regard. You have two batteries that you can swap between whenever you like in the pause menu, and you can return to the computer room in the center to change your weapons at any time (as well as equipping items and getting a general idea of how many monsters are left). This allows a degree of flexibility in approaching things, while still encouraging you to keep your cool and shoot carefully. 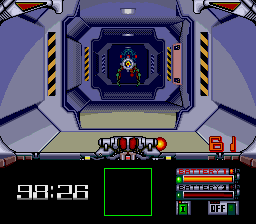 You’ll need to be especially cautious when approaching the various kinds of monsters roaming the cargo decks. There’s yellow monsters that lunge at you aggressively, black ones that take more damage to kill, slimes on the floor and ceiling that require precise aiming to hit, and more. A particularly troublesome kind are green monsters, who randomly escape from the cargo area and wander around one of the eight blocks.

Once you’re alerted to this by Leon, you have to rush to that block and kill that monster as quickly as possible, because if they stay in there too long (indicated by a health countdown in the map screen), the block will permanently shut down after 20 seconds. Four of the blocks do nothing, but a monster stuck in the other blocks for too long will eat at your ability to refill ammo and batteries, as well as turning off the lights and causing your sound sensor to regularly malfunction.

Not only do you have to cope with all that, but there’s also a time limit putting you under pressure. When you complete the first floor, the station’s self-destruct mechanism kicks in, and it will only turn off if you reach and clear the sixth floor in less than 100 minutes. To make things even harder, losing all your health will put you back in the computer room with five minutes lost!

All these ideas combine to craft a game full of tension. You’re trying to carefully approach each situation, but you’re often forced to act quickly when monsters escape or jump you so that you’re still equipped to keep going. Sneaking around the corridors, paying attention to the steady pace of the sensor while always at the risk of being jumped by monsters, provides a feeling of dread that compliments the frantic firefights and chases nicely. 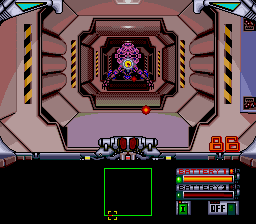 Rushing around can be a bit stilted, since you only move on a grid (similar to dungeon crawlers like Wizardry) and will only pick up some speed when moving in any direction for long enough, but that helps add to the atmosphere by making it uncertain as to whether you’ll reach the green monsters in time. Chasing them is made easier with an arrow that indicates which way they’ve just turned, though you still have to fire at them.

Unfortunately, the concept’s made much more difficult by the extent of the damage caused to the blocks. If a block shuts itself down, that doesn’t just apply to that specific floor, but for the rest of the game. For example, if you can’t get to the C block in time, you can’t recharge your batteries for the rest of the game. While you are often given items by Leon that replace the functions of those rooms (e.g. a battery pack that slowly recharges the battery not in use), this decision makes the consequences so severe that they can easily derail a session if not make it nearly unwinnable.

It’s also random as to when and how often you have to deal with the monsters, which turns the game into a frustrating chore when you could be unlucky enough to be constantly interrupted in your monster hunt. Considering the presence of a Hard difficulty mode that otherwise just provides larger numbers of monsters that home in on you, it would’ve made more sense to have the block only rendered inaccessible for that floor on Normal and save the more permanent consequence for Hard. 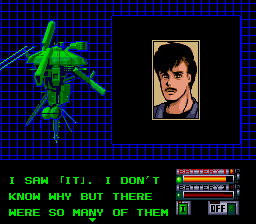 As is, it’s a design choice that makes it much harder to get into and appreciate Silent Debuggers’ qualities, such as the sense of progression felt over the course of the game. The first floor doesn’t feature green monsters or the time limit, which gives you as much time as you need to get used to the mechanics before you’re put to the test. Monsters of increasing power are introduced to each floor, the cargo area layouts increase in size and complexity, and you even get brief cutscenes between floors that detail more of the station’s mystery. While the end result is nothing special, the attempt is still admirable and encourages to player to keep pushing through.

In regards to presentation, it’s very solid all round. There’s a big emphasis on sound design, what with paying attention to a sound sensor in a corridor that’s far too quiet, and the various noises used for that, the monsters and your gunfire really help to nail the atmosphere the game’s going for. A handful of short but punchy music tracks help to punctuate the moments of relief when you’re in the computer room and when you’ve finally cleared the floor of all monsters.

Graphically, there isn’t as much to praise, but the monsters are fittingly creepy and cool in all their late 80s glory, the cargo corridors are bathed in colors that are simultaneously utilitarian and unnerving, and the framerate is quick and smooth enough to let you stalk and shoot monsters responsively. That said, there are some intense flashing effects when fighting monsters that involve rapidly cycling through color schemes, which could be a problem for those with photo-sensitivity or epileptic issues.

While Silent Debuggers can be a bit too difficult owing to its various design choices and the severity of shutting down blocks, it’s still a well-made and distinct survival horror game worth checking out.