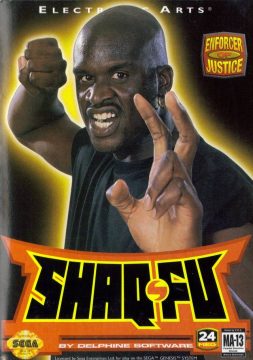 Shaq Fu, developed by Delphine Software, is a game with an infamous reputation. It’ss so iconic as a kusoge that it is sometimes called the worst game of the 16-bit era. That’s a little too harsh, because while there are substantial issues with Shaq Fu, it is very different from most other fighting games at the time.

The history behind the game is a very storied one. It all started when Shaquille O’Neil, one of the most famous and iconic figures in 1990s American Basketball, tried to market his image. Shaq Fu started as a rap album, featuring Shaq rapping. At some point, someone had the idea to put Shaq in a video game, which seemed like a great idea at the time. In 1994, the video game industry had been seeing a huge amount of growth. Games like Mortal Kombat and Night Trap were putting video games in the public eye, getting people to notice them. As a result, 2D fighting games were selling. It was very clear that Shaq was going to be in one of them.

One problem many people have with Shaq Fu is simply assuming it’s another Mortal Kombat rip-off. It does share a lot of aspects with Mortal Kombat such as surreal graphics, strange characters, and a terrible story. Shaq Fu is more of its own game, though. You won’t find combos, cancels, or many other fighting game conventions. Shaq Fu is more about countering, outwitting the opponent, and finding openings in the other player’s strategy. It’s closer to Samurai Shodown than anything else, but even then it’s a stretch.

There was one problem with hopping on the bandwagon and trying to sell Shaq in a video game environment where “shocking” (for the time) content was what was selling. Shaq Fu had to be edgy, but not too dark and violent. Mortal Kombat was banned in some places, and that was a mistake Shaq Fu tried not to make. Shaq Fu does contain small amounts of blood, but it only comes up if you put the blood code on. There are also no fatalities in Shaq Fu, once again, so that the game would not get banned.

Shaq Fu‘s story, while not particularly stressed in the game, involves Shaq getting caught up in a place called The Second World. While in The Second World, he must fight an evil mummy overlord and free a man’s brainwashed son. While the plot would have made a solid movie (better than Kazaam and Steel, anyway), it did not translate very well to a fighting game. Here are all of the characters involved.

The main character, Shaquille O’Neil. In Shaq Fu he is both a basketball legend and a skilled martial artist with the ability to punch and kick people so hard they catch on fire. He calls this fighting style Shaqido, which is a perfect name for such a ridiculous fighting style. He also has customized shuriken, called Shaq-urikin. Most people who have played Shaq Fu seem to think he’s boring, but there is a lot of strategy to him. He’s actually one of the more interesting characters to use.

An evil mummy overlord in The Second World, and the main villain. He has some moves involving his wraps that are sort of cool, but are hard to use and not worth it. Overall, Sett is a stupid character.

A monster created from Sett’s shadow. Beast actually looks cool, having impressive claws and attacks that do a lot of damage. He can’t throw, though, and has some moves cut for balance reasons.

A cat girl alien that is one of the strongest martial arts champions in the universe. She can spin so fast she can turn into a tornado. Sett controls her mind with an enchanted ring, making her somewhat of a semi-villain.

A character based on Shaq’s first rap album. Diesel is a bored longshoreman that fights people in his spare time for fun. How exactly he got mixed up in everything is never clear, but almost every other fighting game has some character with little to no relevance in anything, so why not? Exclusive to Genesis and Amiga.

An undead creature with green skin. Mephis is presumably some kind of dead sorcerer brought back to life with magic. He looks absolutely ridiculous and out of place no matter where he is and who he’s fighting. His attacks are disappointingly standard, though.

Auroch is an outlaw that fights because he likes two things: money and the screams of his opponents. He has an absolutely unbelievable attack where he opens up his hunchback and reveals that he hides a mace inside. Then, he twirls the mace around and puts it back. Auroch is a perfect example of how awesomely stupid Shaq Fu‘s story can be. Sadly, he was only present on the Genesis and Amiga versions.

A girl that fights with magic. She has a voodoo doll. She hates Sett. Voodoo is one of the duller characters in Shaq Fu.

A cyborg cop from the future with a bad case of amnesia. He is the survivor of a huge battle, literally the only one that survived. Colonel puts so many video game narrative cliches on one character that one would expect him to be a satire. Unfortunately, he is not meant to be one. Exclusive to Genesis and Amiga.

Pun on the name “Lao Tzu”, an important figure in Taoism and Eastern philosophy in general. Leotsu is an old martial arts master and minion of Sett that does not like Shaq. Exclusive to Genesis and Amiga.

A dual sword wielding warrior controlled by Sett against his will, and turned into a violent killing machine. Sett took his spirit long ago, meaning that he feels nothing, supposedly not even pain.

The boy Shaq was sent in to rescue. Nezu is brainwashed by Sett into being a hyperactive killing machine, which may explain why he is so much faster and stronger than everyone else in the game. Since he’s just a kid, most people are caught off guard and don’t expect him to be so tough. Exclusive to Genesis and Amiga. There’s a super gauge here called the Fury Meter. As characters take damage, their fury meter goes up. Once it is full, the fury meter slowly empties. As a character’s fury meter empties, that character’s attacks do more damage. While this is a pretty cool feature, it is executed much better in other games.

Shaq Fu is a six button fighting game that plays like a four button fighting game. There are heavy punch, quick punch, heavy kick, quick kick, move boost, and taunt buttons. The move boost button has four uses, all of them essential to learning the game. Pressing forward or backward while holding move boost makes your character rapidly move forward. Some characters do cool things when doing this like teleport or turn into a wolf. If you press forward while holding the move boost while close to an opponent, you perform an unblockable throw. Pressing down while holding move boost causes your character to put up a barrier that blocks some, but not most projectiles. There are two primary play modes. The first is duel, which is a pretty standard arcade mode. You can play your friends here too. Arcade mode is pretty simple, having your chosen character fight through every character on the roster until you see an ending. The fights are in no particular order and there is no behemoth to fight like in Mortal Kombat and no over powering SNK style boss. The game simply ends when you are out of opponents to fight.

Facing the computer is much different than facing your friends, partially because the computer cheats. Opponents are much faster when controlled by the computer, know exactly when to block your every move, and do not have to wrestle the controls like a greased pig to try and do a simple roll motion. On the up side, if you lose a match and don’t continue, the game shows you how to do a move. This feature was also present in other fighting games at the time.

The second play mode is the story mode, where you are forced to play as Shaq and run through the plot fighting everyone. You do not have to fight everyone in any particular order, just everyone in the general area. Once an area is cleared, the story goes on. Each battle has silly banter before and after each fight, possibly intended to add some background to the story. The dialogue is utterly ridiculous, adding a lot to the ridiculousness. 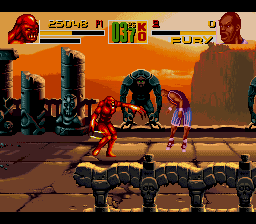 The music is actually pretty good. It’s generally quiet and subdued, though very catchy on some stages.  The Amiga version cuts a few songs and levels, though most of it is still pretty much intact. The Game Boy and Game Gear version lack music altogether, settling with the occasional beeps and boops the systems are known for.

The graphics are one of the highlights of Shaq Fu, showcasing surreal landscapes, ridiculous characters, and sprites with lots of frames per animation. Delphine had historically done great work with high frame count sprites with many of their games. The high animation frame count is not for everyone, though. Sometimes characters tend to get “stuck” in mid animation and end up locking you into a motion, which leads to some very slow action.

Shaq Fu‘s infamy only started once it was released. It soon became such a regular at used game stores, that it was crowding them. There used to be a time when if you were searching through a bin of used Genesis or SNES cartridges, you would inevitable come across more than one Shaq Fu. This is where shaqfu.com comes in, a website devoted to destroying Shaq Fu. It’s a humor site, and can be a bit tongue in cheek, but they are serious about their mission. The site encouraged viewers to send in copies of Shaq Fu that they “liberated” from used game stores so that they could destroy them. This web site immortalized Shaq Fu as one of the most remembered western kusoges, making its infamy last far longer than it should have.

Shaqfu.com received a surprising amount of support, with people all over The United States sending in their copies of Shaq Fu so that the people running the web site could destroy them. Shaq Fu was becoming rare, not valuable, its reputation was ruined by then, but certainly rare. A small, but dedicated group started saveshaqfu.com. Its goal was to preserve Shaq Fu as a piece of video game history, and have people send in their Shaq Fu cartridges so that shaqfu.com could not get them. 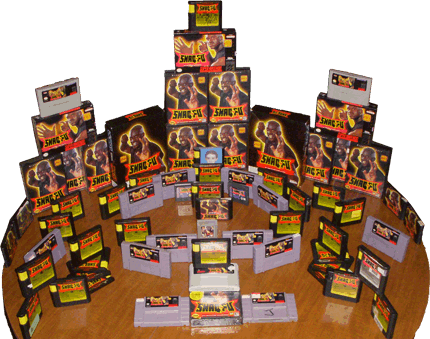 One possible reason why Shaq Fu gets a lot of hate may have something to do with regional differences. Simply put, The United States got bad versions. For some reason, the NTSC versions of the game run much faster. The PAL version has much easier to do input commands and the AI cheats less. It still has jerky controls, but it’s at least playable. 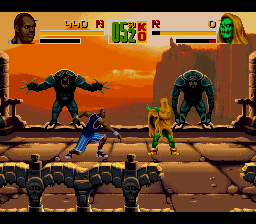 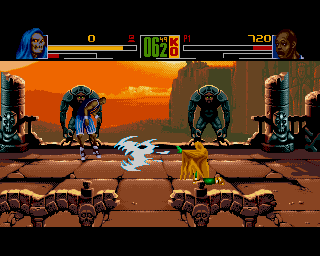