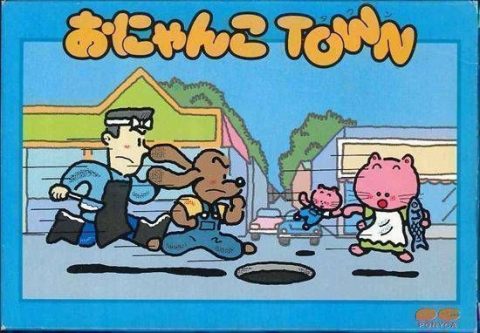 Micronics, the company behind Onyanko Town, wasn’t known for their original games. They were a creative-for-hire company like TOSE or Red Entertainment, one that specialized in porting other companies’ arcade games to home systems of the time. However, the few original titles they did make stood out (at least conceptually) against their peers. Examples include ‘89 Dennou Kyuusei Uranai, Geismos, and of course Onyanko Town. 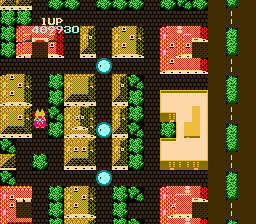 In fact, one could say this game simultaneously represents both sides of Micronics. On the one hand, Onyanko Town is thoroughly entrenched in their previous work with popular games and genres. True, it isn’t an action game like most of that work, but the game is still rooted in arcade sensibilities and transparent about those roots. On the other hand, Micronics’ thorough understanding of how arcade games work allow them to push the envelope with Onyanko Town, advancing its genre in ways that other games wouldn’t revisit for decades. 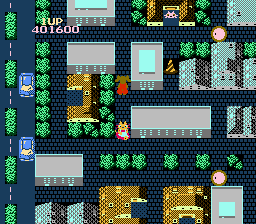 To be more specific, Onyanko Town is a maze game, much like Pac Man, Yuu Maze, Tower of Druaga, Gauntlet, etc. Its premise is simple: as a mother cat, you have to search the city for your kitten and get them home safely. You have several abilities at your disposal – jumping over obstacles, opening and closing manhole covers to elude/trap enemies – as well as dangers to avoid – cars, dogs, angry fishmongers, in later levels sewer snakes. There are also bonus items to collect à la Pac Man, including a fish that grants invincibility to dogs but permanently summons the wrath of the fishmonger. 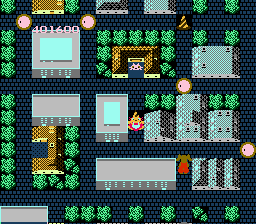 At first glance, Onyanko Town is exactly what one would expect from an NES game made in the mid-80s. It isn’t anything other than what the player expects of it: an innocent bit of leisure to pass the time with. At this level, the game makes no attempt to stand out from the crowd, and does whatever it can to confirm itself as a member of that crowd. Any additions it makes appear slight. Its themes are safe, broad, and relatable. Many would feel right at home in a Silly Symphonies cartoon: the feline mother trying to protect her kids, the (utterly cacophonous) soundtrack framing the action as family safe madcap zaniness. In this regard, Onyanko Town is consistent if not always successful or endearing. 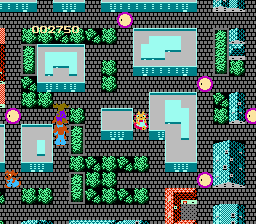 However, limiting one’s self to surface appearances means ignoring all the subtle ways the game stretches and modifies the maze game’s inner workings. For example, its spaces are more clearly defined: Onyanko Town’s urban setting, combined with the detail used in rendering that setting, lends it a relatively grounded sense of reality compared to its peers’ abstract mazes and dungeons. 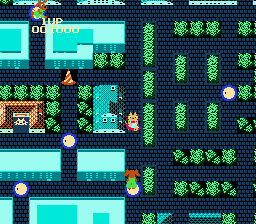 More to the point, the set of actions at the player’s disposal leads to a greater, more nuanced involvement with those spaces. One of Pac Man’s most distinctive features is the power pellet, which inverts the rules of play and forces the ghosts into a reactive position. Onyanko Town basically applies that philosophy to the entire play experience. The urban environments aren’t some static thing for the player to navigate, but an object they can modify or circumvent as they see fit. Micronics seems to have been aware of that plasticity, too, which would explain how Onyanko Town is as flexible as it is. 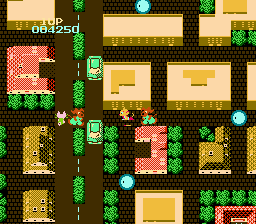 At times, there’s a creative and somewhat rebellious tone to playing the game. Even if jumping and manipulating manhole covers are possibilities Micronics has planned for well in advance, the level of control they allow players over the world feels like one is showing that world how meaningless its limitations are, either by circumventing those limitations or outright defining them. That other actors have no choice but to respect those limitations only strengthens the effect. 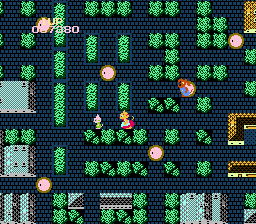 At other times, Onyanko Town functions less like a set of toys to play with and more like a set of challenges to work out. Most of that happens in the second half of a given round, when escorting the kitten home means you can no longer jump over barriers. This forces you to change how you think about the game: away from spur-of-the-moment improvisation and to strategic forward thinking. 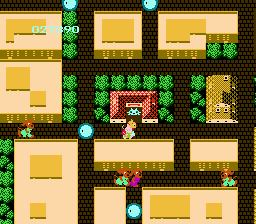 Likewise, the game begins to shift in such a way that it can allow that strategic thinking to flourish. There are many little nuances that only become relevant under these circumstances. Assuming you’re not leaving manholes open to obstruct an enemy’s route, they require a certain amount of attention lest the dogs crawl back out once they’ve fallen in. Yet this creates friction with a risk/reward scoring system that vaguely anticipates Pac-Man Championship Edition DX by a few decades: the more dogs are trapped in a sewer before you close it, the higher your score bonus will be. This isn’t even considering how fishmongers interact with manholes (it depends on the round). In short, because of how strongly the game engages its central premise here, the game’s strategic moments are among its most rewarding. 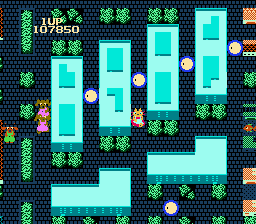 Yet if they lead the game to its greatest successes, then they also lead it to its greatest failures. It’s hard to identify what specifically causes that failure. Maybe it’s Micronics taking the game’s flexible nature too far. It may also be that they didn’t take that nature far enough; that they tried to make it conform to standards and expectations it was never meant to fit. Whatever the situation may be, the result is the same: Onyanko Town experiences a lot of strain as the experience goes on, and its ability to handle that strain weakens, as well. There are a few ways to approach this dilemma, the first being purely technical. As the levels increase in difficulty, the greater number of dogs chasing you taxes the NES’ hardware further and further, slowing the game down to a crawl. The fact that the mother already moves at a leisurely pace only compounds the issue. 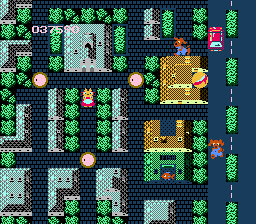 Alternatively, one might consider the strain the player is forced to feel as the rounds advance. It isn’t as straightforward as a jump in difficulty, although that is part of it. The ease with which things pile up and the ever-increasing difficulty of handling them (lower speed with the kitten, dogs staying trapped in manholes for shorter amounts of time) ensures greater amounts of tension as the game goes on. Yet more often the game’s unpredictable nature is the source of stress. One round can be a suspiciously easy dash from your house to the kitten and back. The next can be unforgivingly difficult and capriciously cruel, with obstacles and enemies overwhelming you at the worst of times. The inability to predict whether a given round will be one or the other further contributes to that stress. 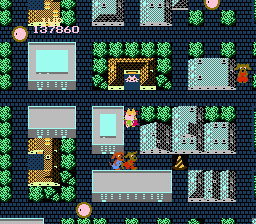 All of this puts the game in a very difficult position. Where other games benefit from a difficulty curve like this by framing it as a test of the player’s skill, Onyanko Town has already framed itself as a sweet and innocent game. It can’t reposition itself to take advantage of these trying challenges. Nor can it retreat back into diversionary pleasure; the rounds don’t offer enough structure to support that, either. Where does this leave Onyanko Town? Tonally confused, lacking in confidence, and suffering the consequences of both. 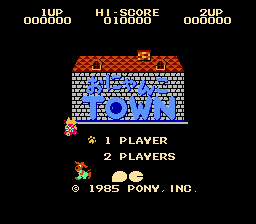 From a historical perspective, Onyanko Town entered the scene too late for its accomplishments to matter. As video game technology improved and opened up new possibilities to developers, maze games became too limiting for them and thus waned in popularity. Given the circumstances, it’s also hard to say the game is positioned to enjoy any sort of critical re-evaluation. Still, if Onyanko Town’s value doesn’t lie in the history it intersects with, then that value might lie in the alternate histories it points to. What games might this small company have made if their focus was different? What direction might this genre have taken if historical conditions were more favorable? Onyanko Town is ready to suggest what might have been.