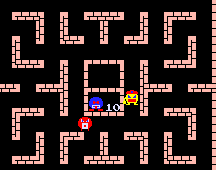 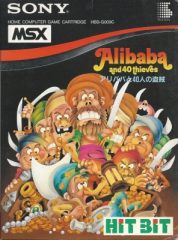 It cannot be emphasized enough how much impact Pac-Man had on popular culture. Ask video game score champion Billy Mitchell, songwriter and composer Jerry Buckner, or Rich Moore, the director of Wreck-It Ralph, and they would all elucidate on how the little yellow pizzaman revolutionized game culture at the start of the eighties. It kickstarted the whole early eighties craze of maze games that took place on a single screen and required you to dodge enemies while collecting a lot of items, mostly in the form of pellets or small trinkets. Several games would change up the formula somehow like Amidar and Crush Roller, but they would continue to follow the same essential format of running around and gaining points. The focus of most maze titles strayed away from violence and whomping upon enemies, but Sega (or rather ICM, apparently one of their subcontractors at the time), combined maze-running and beating up baddies into a singular point. They also based it off of Arabic literature because sure, why not, and we get Ali Baba and 40 Thieves, one of the quirkier Pac-Man clones of its time. 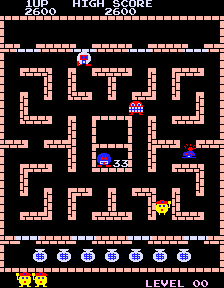 As the title alludes, this game is somehow based on the classic Arabian story of Ali Baba, a humble woodcutter who discovers a treasure guarded by forty thieves beneath a door which is opened by uttering the magic words “Open Sesame.” So you are ostensibly the Arabian folk hero Ali Baba, though you don’t really look an iota like most visual depictions of him. You instead resemble Pac-Man with an actual face, an odd hat that looks like a hybrid between a red turban and a pirate cap, and a single arm which flips up and down as you move around. After you pop in a quarter, Ali Baba “Open Sesames” his way into the thieves’ hideout and steals seven bags of money, prompting the thieves to retaliate and take it all back. Your objective is twofold: Defeat the forty thieves and protect as much of your treasure as possible. In a twist that cuts against the grain of most other maze games, you are actually the most powerful character on-screen most of the time. No having to scramble for power pellets or grabbing hammers or whatever, you just mostly bulldoze enemies with your single beefy arm. There are usually four enemies on the screen at any given time, and three out of these four are normal thieves. The white, green, and blue guys can all be instantly flattened if you run into them, which makes you feel more powerful than your typical maze runner… if you can even hit the jerks, but more on that later. 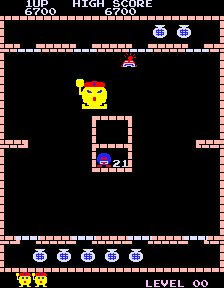 However, there is one enemy that kills you instead if you contact him, and it’s that rather angry-looking red fellow with bared teeth and an insane glint in his eyes. The “Captain Thief” is who you’ve got to watch out for in every level, as running into him is one of two ways to lose a life. If you want to shake him, you can actually drop a bundle of… stuff (looks like a cluster of spikes) to temporarily divert him off your trail, and you can do this as many times as you wish, even if it can be tricky to time. He’ll be trying to clobber you while his subordinates break into your moneyspace at the bottom of the screen and attempt to bring it back to their hideout. If all seven bags make it to the thieves’ hideout, that is also the end of Ali Baba, who presumably dissolves himself in shame. Whenever a thief picks up a money bag, the bag eclipses most of their body except for their feet, giving a comical appearance of a bag with legs scuttling towards the top of the screen. You get double points for smashing a thief with money, and the bag they tried to steal warps back to your domain. All you’ve got to do is keep smashing thieves and avoiding the captain while protecting your money, and you continue until you’ve defeated forty in total which brings on the next round. 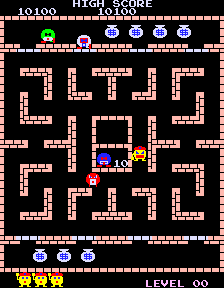 There is a peculiarity in the form of these question marks that occasionally appear around the center block. These “mystery” icons may just do nothing but give you points, but they can either help or hinder you (and tend to help MORE than hinder, so pick them up). If fortune aligns to your favor, then one of three positive happenings temporarily improves your abilities. First, the gates at the top “Open Sesame” and allow you to steal back a money bag, but only one before the gates close again. Second, your speed increases and it becomes much easier to crush those meddlesome thieves. Third (and the coolest by far) causes Ali to grow three times his size and make it feasible to actually squish the captain thief! Another lesser thief is also out around the screen during this time, but going for the captain thief garners you 800 points instead of the typical 200. Most of the walls also disappear, making it a free-for-all to pay back that damn captain. Unfortunately, there is a bad thing that may happen if you pick up a mystery, wherein the captain instead grows to three times his size and you have to dodge him in enlarged form as the walls fall away. This isn’t too tricky as you can just run around the remaining walls at the center, but it’s annoying to be taken away from your conventional game for this inconvenience. 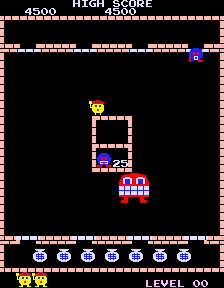 That’s all to be said about how Ali Baba and 40 Thieves plays, certainly one of the more innovative Pac-Manduplicates of its time. Sadly, that innovation is overridden by some ridiculously frustrating artificial intelligence on the part of the thieves themselves. Somehow, they are REALLY good at dodging your movements and will likely scoot out of the way when you’re a millimeter away from pounding them. There’s almost no rhythm or discernible patterns in their movements and trying to crush the thieves while avoiding their captain is a royal chore. What’s worse is how long it bloody takes to actually kill forty of them, and odds are good you will have all of your money stolen at least once. It’s certainly a fun game in concept, but the execution is arguably a bit too frustrating to enjoy proper. Still, if ever you wanted a violent Pac-Man clone, Ali Baba is worth checking out. It did receive a port to the MSX that is rather faithful in gameplay and graphics, though the sound is repetitive and tinny. It also got an unlicensed Korean port to the Sega Master System and was released on a Russian computer known as the Vector-06C, which appears to be a port of the MSX game. 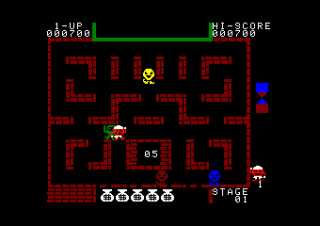