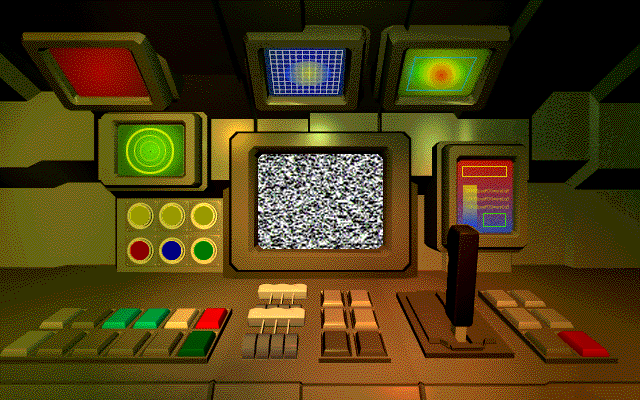 Haruhiko Shono’s first game – Alice: An Interactive Museum – is completely forgotten nowadays, but it did manage to be awarded a prize in its time – the AVA Multimedia Grand Prix Award. A little victory that probably helped the guys at Synergy remain convinced in the path of “essay gaming” they choose to follow. A tortuous path indeed, but at least their effort were not in vain! Thus, the following year, Shono’s new experiment – L-ZONE – was already released.

What is this “L-ZONE” in question? Well, the manual says it’s a mysterious city built by a mad scientist in a remote area of the planet. You assume to role of a perfect stranger who lands for some reason no far away from the gigantic dome sheltering the L-ZONE, and you have no other choice than direct yourself to the entrance of the building. “Activate the machines! Solve L-ZONE’s riddles! Throw open the door to planet Green!” …is what it says in the manual. 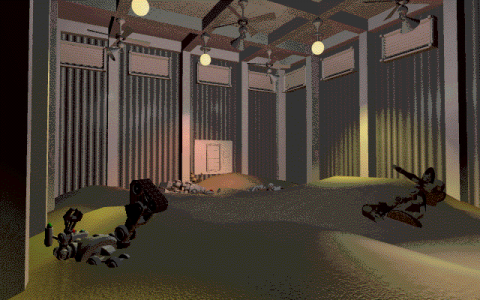 The game still uses a regular first-person adventure game interface. Fortunately, even though this work is still anterior to Myst, the ergonomy is way better than in Alice. Sure, it’s not perfect, but at least now it’s bearable. The exploration is way more fluid, there was a welcomed cut down on the pixel hunt and an updated version of the game even features a save system.

So, what’s the goal of this one? Well… Let’s say that where Alice was still pretty much a classical adventure game in essence, L-ZONE willingly strips the genre of one of its core aspects: Puzzles. Indeed: There isn’t any real obstacle in your way here. Actually, you could reach the end of the game in a very straightforward, short path – even without a walkthrough… but that’s not where the game’s point lies.

Besides, the ending is purposedly accessory. “To get to the end” definetely isn’t this game’s essence. What’s important here is Shono’s minutiously created environment.

The L-ZONE is actually an entirely automated city of monumental proportions that was left in an abandoned state – what one could imagine used to be a huge complex of district-sized laboratories doesn’t house any human soul anymore. However… there isn’t a square-meter that isn’t covered with all kinds of devices. Once you set foot in the depths of the city, you find yourself encircled with tons and tons of machines: screens, buttons, levers, terminals, electric cables, LED lights – an oppressive mess of logical connections. All these complex systems seem only to share one common trait: you have no clue about how they work and not a single idea about what their use might be. All these tools must have made sense when there was someone qualified enough to operate them, but what now? They’re just standing there, waiting for an input. This is what you journey through the L-ZONE will consist of: fiddling with stuff you don’t understand.

“Technology has both a positive side of possibilities and a negative side of danger, which is also very captivating. I think dealing with the balance between the positive and negative aspects of technology as a theme is very thrilling.” – Haruhiko Shono

All you can do is click. Click everywhere. And try to get a meaningful result – if that’s even possible – in the hope that it will let you feel like you have “put your finger on it” be it only for a few seconds. Don’t be let down if your attempts don’t lead to anything fruitful, though – it will be the case pretty often. Some machines actually activate stuff, but some seems to only be emitting strange sounds and images. Actually, some go as far as to induce hallucinations – leaving your senses filled with psychedelic fractals and hardcore techno. 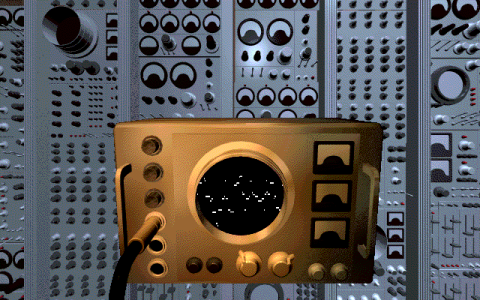 It’s funny – and frightening – how the sounds emitted by the machines seems to blend with the sudden musical sequences. This sound design was an achievement of Norikazu Miura, who would go on to secure success in the mainstream by working on such series as Suikoden or… Tokimeki Memorial. Not really the same world, uh?

Most of the machines aren’t of any use for you to “complete” the game – you don’t really “need” to even touch them. Actually, L-ZONE is kind of a prototypical LSD in fixed-screen progression – except with way less dreams and way more machines. The experience really lies in the exploration itself rather than its final outcome.

The game also really succeeds in installing a double feeling of oppression: The mortification induced by the sudden discovery of a fallen society in which one wishes he had never set foort – not unlike BioShock‘s Rapture – as well the impression of alienation provoked by the sight of these gargantuan networks of machinery that appear to seek your very exclusion. The L-ZONE is the very incarnation of the technological nightmare of an automatisation that, going to the very end of its logic, doesn’t need mankind any more. What is unquestionnable is that it certainly doesn’t need you. This city-factory is like a technocracy without a technocrat – an electro-mechanical dystopia. The machines only have audiovisual hallucinations left to offer to the lost human wandering through these hangars as if discovering in its bowels the relics of an alien civilization.

One progresses through the L-ZONE with mixed feelings of curiosity and intimidation. The curiosity that drives one to try to figure out things, and the intimidation from the idea that it might very well burst into your own hands. After all, couldn’t that be a perfectly plausible explanation as to why those who used to dwell this place aren’t there anymore?

There is a downside to L-ZONE, though: it’s way too short. A few hours will be more than enough to see all there is to see. Well, it does show that the game’s enjoyable enough as to push one to wish for more. It’s a pity a game like this couldn’t make in into a bigger, more thorough project – because it really has unique potential. Anyway, the game had pretty much the same fate as Alice: it did win a prize – the Multimedia Association Chairman’s Award – but still faded into obscurity once again… Hopefully for Shono, his next work would finally be remembered by History – and L-ZONE is, in its own way, a spiritual predecessor to this achievement.