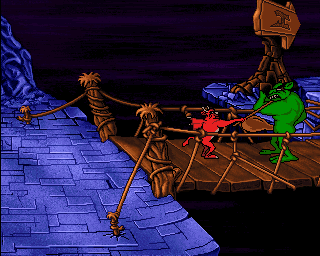 If it’s better to reign in Hell than serve in Heaven, that must mean serving in Hell really stinks. That’s definitely the impression you would get from the lowly devil Mutt, who’s been sent out to brave the five levels of the Labyrinth of Chaos. This deadly maze is filled with all manner of traps and monsters who will chew up and spit out our diminutive protagonist if he’s not careful. The kicker? He’s doing it all for a pizza. Apparently Domino’s doesn’t deliver to the Underworld.

Litil Divil is the type of game which defies traditional genre descriptions, instead nestling into the somewhat ambiguous category of action-adventure. It has no qualms with throwing you in at the deep end early on with no explanation: the very first screen of the game has Mutt standing face to face with a big green ogre standing on a rickety wooden bridge. Once the ogre has been knocked off the bridge, Mutt enters the Labyrinth and the true game begins. 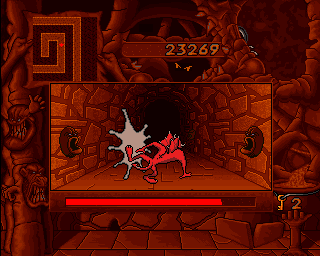 Wandering these maze-like halls feels like an old-fashioned dungeon-crawler, except from a third-person perspective. You actually see Mutt walking down the corridors, making him jump and maneuver left or right to avoid the numerous traps that will try to leech away your lifebar. Most of these early traps aren’t too hard to avoid once you figure out how they are triggered, until you get to later stages where it sometimes feels like it’s entirely a matter of luck.

The many doors scattered throughout the Labyrinth are where the game gets interesting. They lead to rooms that essentially play out like minigames, each one presenting you with a different obstacle to overcome. These range from jumping across floating bubbles to playing Simon Says with a mermaid to having a shoot-out in a saloon. Successfully completing a room will give you an item, open a new passage or both, as well as refill some of your life. Failing a room will deplete your life instead. It’s a nice idea to try and add variety to the game by giving you something different to do each time. 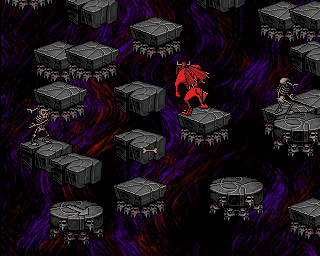 A few of these rooms require you to have a certain item to complete them. These can be bought from stores with gold that Mutt finds lying around the Labyrinth, or they are awarded to you for the completion of other rooms. One of the earliest examples you’ll face is a room inhabited by a giant spider that sends its offspring after you. Stomping them alone is pointless, unless you’ve bought the bug spray to battle the bigger arachnid with. Sometimes the items required are less obvious: in one of the many arena battles in the game, Mutt must face off with a sumo-wrestling demon. The only way to actually defeat him is to use a needle to pop him like a balloon at the conclusion of the fight. 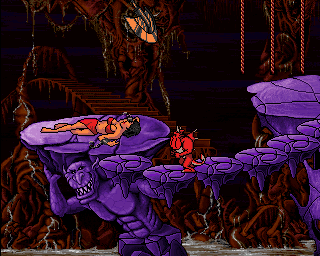 Then there are locked doors that come in two varieties. The basic locked doors require keys which are found lying around the floor of the Labyrinth, so they are simple enough to open. The locked doors that you will encounter at the end of each level need a little more effort to bypass. A guard will fleece Mutt of his gold and let him pass once his unknown price is met. It’s possible to end up in an unwinnable situation this way, since the guard will take all the gold in your possession even if you have items still to buy. With the way the levels are structured it’s unlikely that situation will arise, but it is indeed possible.

One area that Gremlin Interactive certainly didn’t skimp on was the game’s graphics. Before developers were able to import actual hand-drawn images into their games to achieve the effect more accurately, Litil Divil really feels like an interactive cartoon. Most characters in the game have a sizeable amount of animation frames, especially Mutt himself. His design straddles the line between being ugly and endearing and you’re given a good sense of his character: a put-upon underdog, but with a mischievous streak as evidenced by his Muttley-esque laugh. 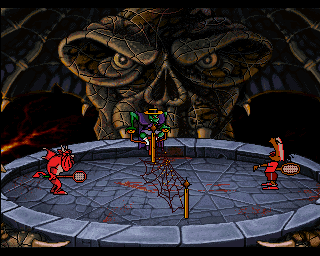 Unfortunately, as much charm as the game has, it’s impossible to overlook its main flaw: the endless walking down brown hallways. By the third level you’ll be absolutely sick to death of looking at the same bland walls and floors, with not even a change in the wallpaper to look forward to. No matter how far you get or what challenges you overcome, it’s brown, brown and brown all the way through. 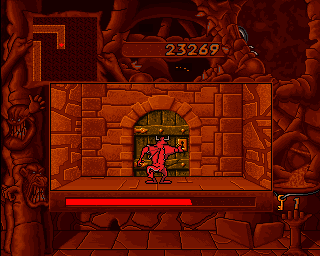 That’s not to say that some of the minigame rooms aren’t ill-thought out and flawed. Far too many rely on trial and error, or are marred by awkward jumping controls and collision detection. The numerous one-on-one combat segments can be very clunky and often devolve into hammering away at your opponent with the same attack over and over again. Battling the demons at the end of each level with the scythe is notably exasperating because there is little indication if you have hit them or not, nor much of a window to dodge them should they counter-attack. Braving the never ending boredom of the maze seems all the more futile when minigames like this are your reward. 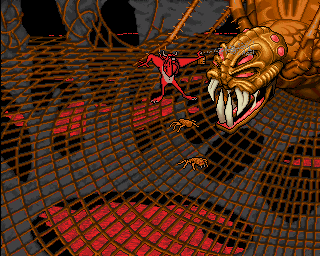 While it should be commended for trying something a bit different, Litil Divil is very difficult to recommend. A lot of love has clearly been put into the presentation, but that doesn’t amount to much when the game itself is such a slog. Had the maze sections been truncated and the minigames been made more varied, it could have been an unsung classic. The concept itself is sound, however the execution is deeply lacking. 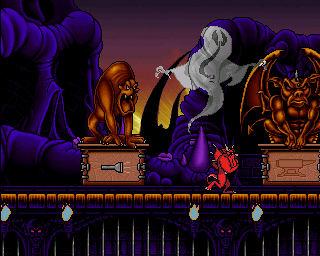 Litil Divil was released on DOS and the ill-fated Amiga CD32 in 1993, then on the equally ill-fated Philips CD-i in 1995. The DOS version can currently be purchased at GOG.com, DotEmu, GamersGate, Steam and Desura. Differences between the three are minimal other than the CD versions having higher quality music, although there’s an annoying gameplay quirk that the DOS and CD-i versions share: when Mutt walks towards the screen, the camera angle doesn’t reorient itself behind his back to let you see where you are going. The CD32 release is the only one that does this, making it less frustrating to play. The CD-i release’s major addition is an animated opening and ending, making it the only one of the three that actually explains the plot in-game.