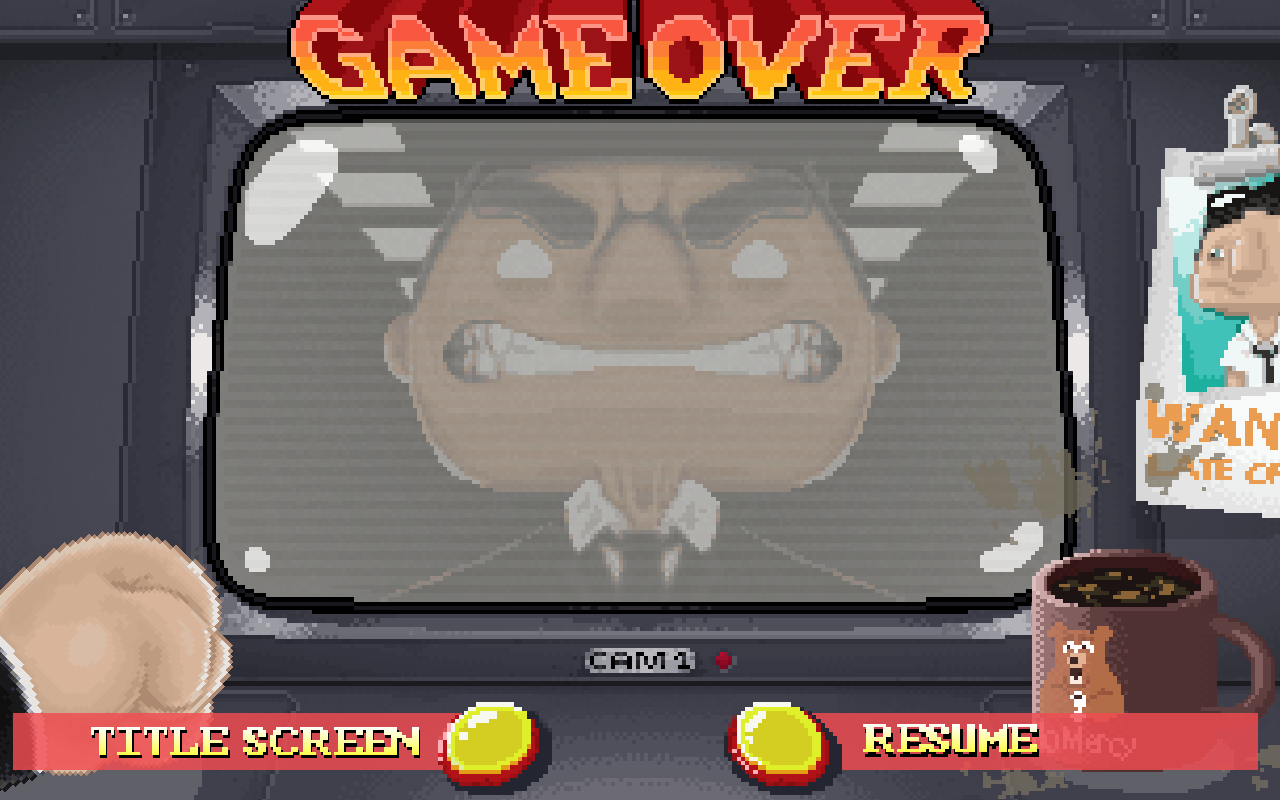 Level 22 is a distinctively American game at first glance – it’s hard to believe that it was actually made in France. It’s an office satire that pours on countless television and comic book references, focusing on the ever American grind that came from the office life of the 90s that frustrated so many of us and lead to so many works pointing out the sheer absurdity of the lifestyle, reaching the epitome with the comedy classic Office Space, and more darkly (with a lot of satire aimed at the 80s) in American Psycho. Level 22 instantly reminds of so many great comedies that attacked the system designed to grind all the life out of all those in it.

Level 22 follows Gary, a low level office drone who’s late to work due to his birthday celebration leaving him with a hangover and causing him to over sleep. He needs to sneak to his desk before his boss knows what’s up, so he enlists the help (via phone) of Marty, his slacker buddy who used to work for the same company and became legendary for his ability to avoid work. Marty knows all the best ways to avoid detection and to get through the building quickly, and he also has a bit of a smart mouth at times and becomes Gary’s devil on the shoulder. The second boss is the literal boss of the company, and Marty gets Gary to smash the guy’s head in with a large book multiple times to destroy his security computers. He’s a good influence. 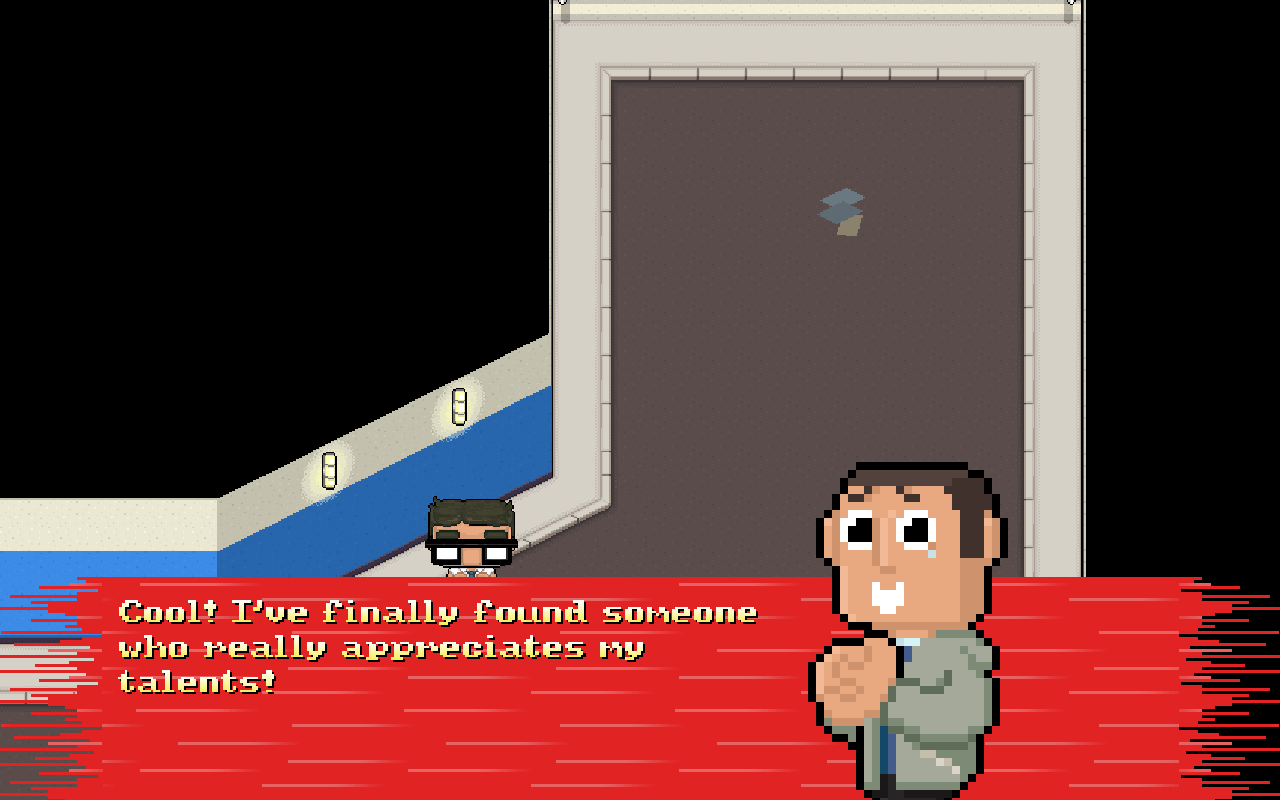 Level 22 is like a really good episode of an animated prime-time comedy. It has sharp wit and its on point with how absurd the office world really is, even if it goes to ridiculous lengths to hammer in the point. For example, there’s a giant monster man in the basement who has never seen the sun who lives solely to burn incriminating documents. The company also has android guards in the research department, along with actual lightsabers. It’s all very sketchy and silly in how obviously evil the company is, especially when the boss himself rides around on a large chair while spying on the moves of every employee under his command.

Gary and Marty are also a lot of fun in their commentary. Gary is a pretty normal guy who tends to get a bit too into Marty’s plans when he should be questioning him more, to the point where he’s enthusiastic about possibly blowing up that monster in the basement, or giving people laxatives. Marty, on the other hand, is someone I feel I’ve met countless times. He’s lazy, but so dedicated to being lazy that he makes it an art. He’s passionate about things that actually interested him, and he loves to give the screws to the system, though with no greater goal or ideology behind him. He’s pure id, while Gary is the super-ego that starts to bend to the id’s way of thinking. 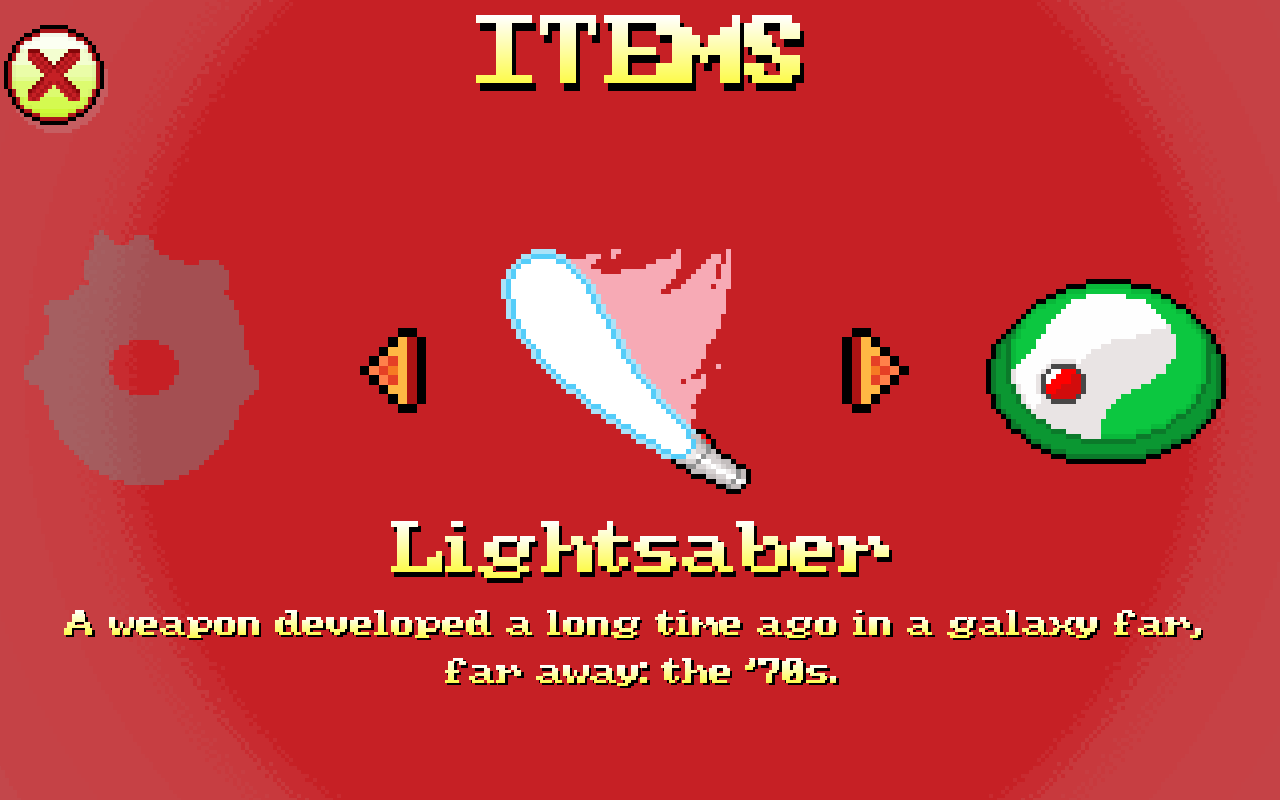 That’s all fine and good, but the game itself is plenty fun as well. It’s a stealth game where being seen for a second or so means instant loss, and it has an interesting set of mechanics to work with. You can look at the whole level my moving the camera itself, then tapping of clicking on a spot to direct Gary. It’s best to go a step at a time, as clicking on a spot far away leads to Gary going to it in a very straight and simple way, which usually gets you caught. The winning strategy is to sneak around, figure out blank spots, and hug the walls close while finding hiding spots.

Most of the time, though, this strategy alone won’t work, as enemies get more complex and difficult to avoid. This is where items come in. Every level has a series of items hanging around that you can grab and use by selecting them from the top right corner of the screen, all with different effects. Some hide you from plain sight or certain enemies, others can be used as distractions, and some are items of sabotage. For example, you can use doughnuts to distract security guards, or you could dunk one in radioactive waste and trick said security guards into eating it, instantly knocking them out instead of giving them food based superpowers. Oh, and you can also hit people with a thick book, because sometimes stealth gets messy. 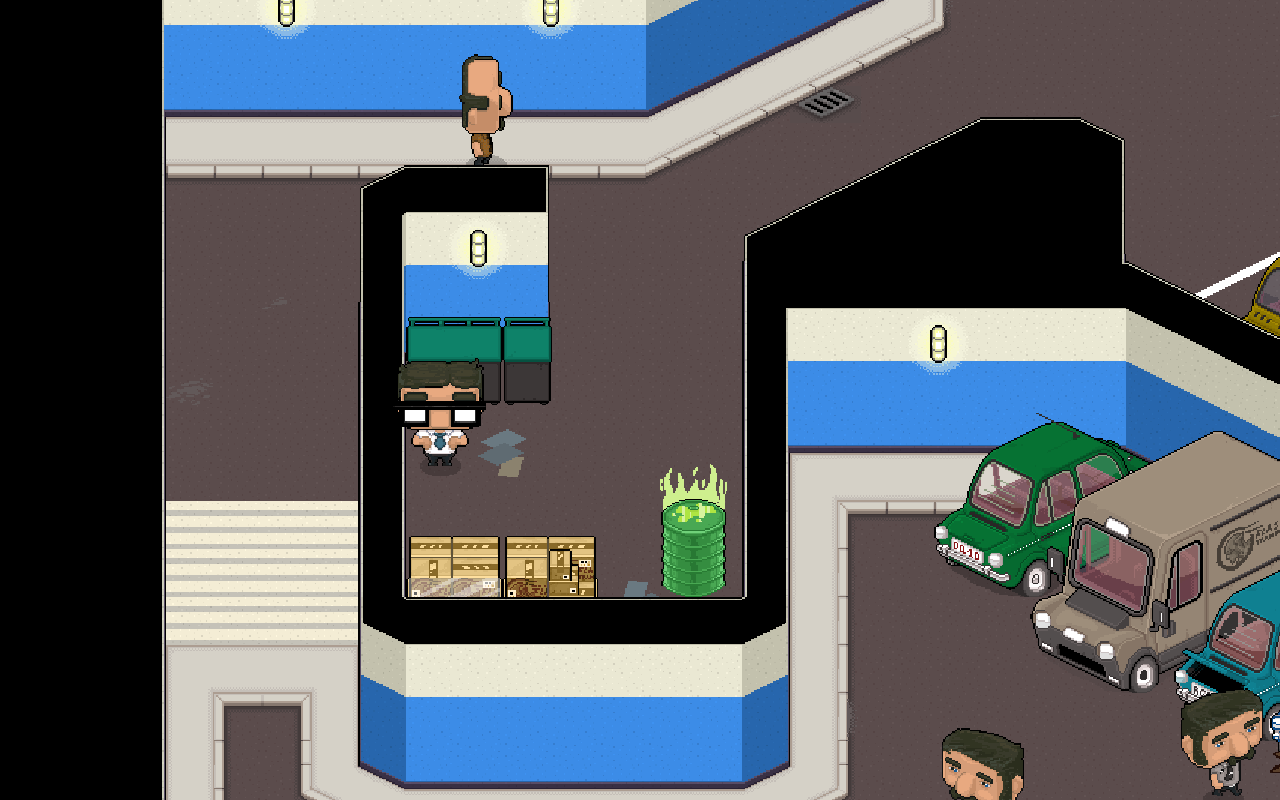 The level design is superb and leads to a ton of challenges. Every section is its own maze and puzzle that needs to be solved, with different parts functioning with the existence of another. By carefully planning out your moves and working fast, you can undo the defensive knot until it’s a simple string again, which requires a lot of trial and error. Figuring out each level’s trick and breezing through them after several failed tries and frustration is incredibly satisfying, channeling that sadistic old school style of game design. Even the bosses work this way, as they all have some sort of trick you need to figure out and properly use to survive them, all while avoiding detection. The game doesn’t quite reach Ninja Gaiden levels of brutality, but it gets up there, especially during conveyor belt levels.

On top of the normal challenges, every one of the four sections of the game has collectables and secrets to find. There are safes scattered around that house puzzle pieces that form boss illustrations, while several of Marty’s action figures have been left around the office. Said action figures are also amusing in their own right, all original characters of the do not steal variety, and with cute reference descriptions, along with one based on a Noego character concept for a different game. They’re damn hard to collect, so it’s only a challenge for those who just have to complete a game. 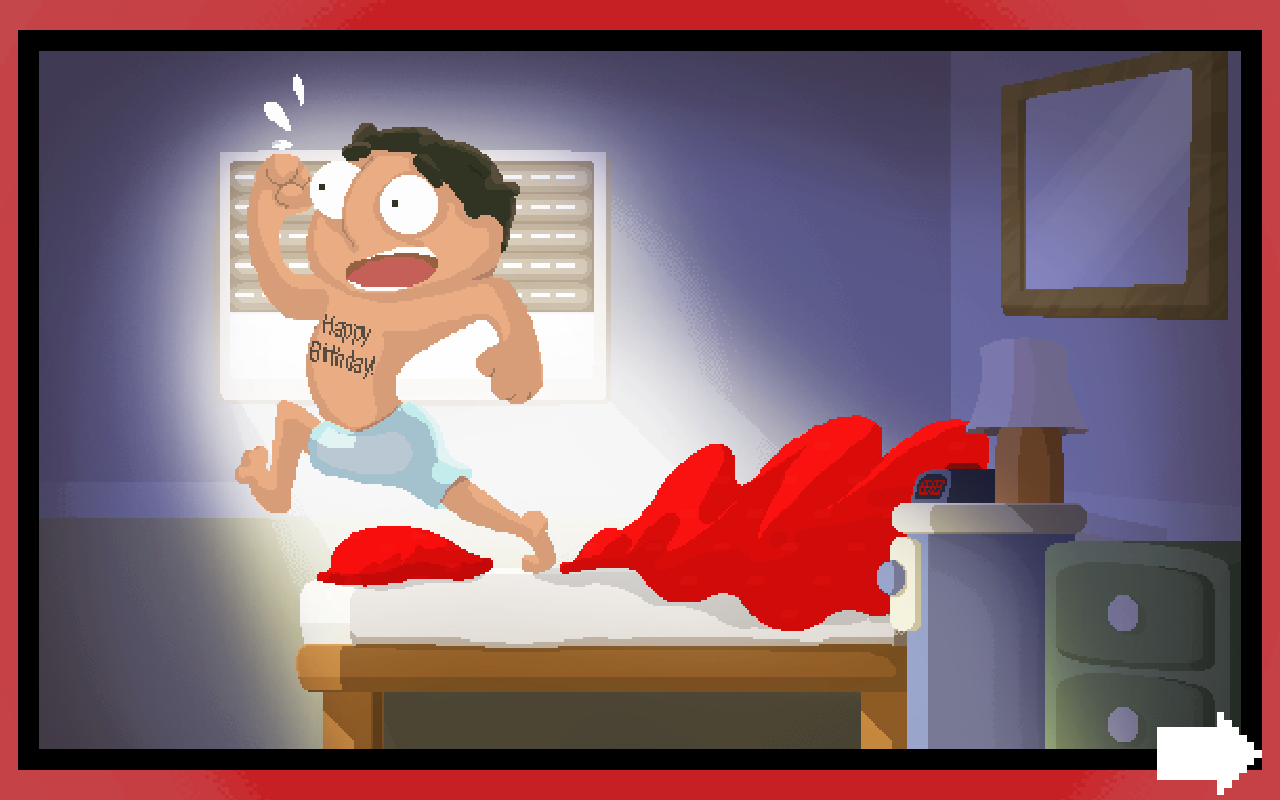 The entire game’s presentation keeps up with the running theme of 90s nostalgia. It’s colorful and uses a lot of sprites and lively backgrounds in menus and dialog boxes. It’s like a mixture of SNES sprite work, low-budget action anime sensibilities, and a whole mess of office humor and Fox animation character design. Gary and Marty looks like the stars of some lost cartoon pilot, and their world has shades of Futurama, with all the fantastical technology and absurd exaggerations. Even the music sounds like the soundtrack of some lost Dilbert adaptation.

Really, nostalgic is the perfect description. The game constantly references classic yet somewhat modern games, movies and cartoons, including the now infamous box trick from the Metal Gear series. It’s in love with this time period from twenty years ago, and this is made perplexing by it being the culture of that time as found in America, yet made by the French. They made a damn impressive imitation, I’ll give them that. Or maybe, just maybe, the office world and interest of sci-fi nerds shares similarities around the world. Who knows, all I can say is that Level 22 is pretty great, origin be damned.

Unfortunately, Noego was closed and Level 22 got pulled off Steam on September 19, 2015, though it’s now up under the “2016 Edition” label and distributed by a new developer (Moving Player) and new publisher (Plug In Digital). It has also been ported to many more platforms.