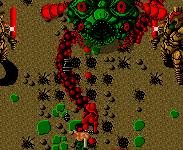 Not too long after the release of the first game, SNK decided to capitalize on the modest success of their commando action title and release a sequel within the same year. Ditching the Ikari moniker but still obviously starring Ralf and Clark in all their bare-chested headband-wearing glory, Victory Road (called Dogousouken or “Angry Skies” in Japan) places the two heroes in a rather “cosmic” predicament. Whereas its predecessor was set in a reasonably realistic jungle landscape, the scene is now an alien plane of existence filled with all sorts of monstrous extraterrestrials. No one knows how to account for the context of this game. Maybe Ralf and Clark were just the baddest soldiers on Earth, but that wasn’t enough, and they desired to be the toughest in the galaxy. Their wish was granted by some nameless force, and now, without any visible means of retaining oxygen in their circulatory system, the two warriors now intend to blast through the antagonists of whatever this foreign planet is called. 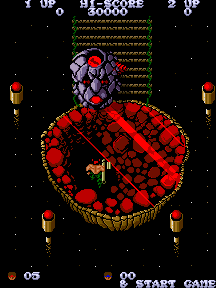 Victory Road is an example of a common trope in fiction where the premise of a game gets recycled In Spaaace! It’s been done many times before and the new extraterrestrial setting does not do much to enhance the game, but it does add an overall sense of bizarre quirkiness that almost matches the original game, even though no giant corpses or leprechauns are present. The instant you start, a large stone head floats in front of you and issues a taunt in surprisingly good English, if not badly acted: “Warriors! Show some Guts! You can’t defeat me! Come and get me if you can! Ahahahahaha!!!” Yes, that is villainous laughter, and it sounds awfully hilarious for real.

The graphics are a slight improvement over the original, but the colors are still relatively drab. The primary scheme of the entire game seems to primarily consist of red and green, with bits of yellow and gray. The landscapes are more varied than the jungles and waters of the first game, but nothing particularly stands out. There are certain zones that are almost entirely in bright red, and it’s pretty offensive on the eyes. For sound quality, none of the music is remarkable, though there is at least a bit more variety than the original game. There are a few voice samples such as the ridiculous taunt mentioned above, as well as Ralf and Clark rising while shouting “C’mon, let’s fight!” as they revive. This interesting quirk, however, will grow tiresome by the umpteenth death you suffer. 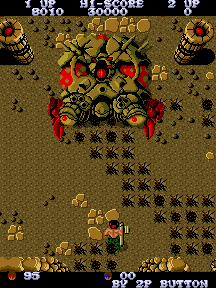 The gameplay is much the same as the original, including the rotating joystick allowing individual movement of the character’s upper and lower halves. There is the notable difference of unlimited ammo; bullets can be fired and grenades can be chucked indefinitely, as well as any other weapons you’re able to find. On the subject of other weapons, besides the bullet and grenade enhancements from the first game, there is a large bazooka which plows through enemies and hidden walls alike, a steel boomerang that can slice through opponents, and even a giant sword that can destroy enemies merely by touching them while somehow allowing you to still fire normal bullets. It’s fun to just keep turning the rotating joystick to keep swiveling around with the sword, sort of as if Link from The Legend of Zelda was stuck in a perpetual spin attack. There are no tanks on the alien planet, but every now and again, a suit of metal armor will pop out and allow the character who picks it up to take an extra hit. There’s also an eyeball item that allows you to detect items hidden within the scenery, much of which is destructible. You toss grenades (or fire the bazooka if you have it) to tear down walls and blocks to either get some items or blow a pathway through a geological formation. It can be advantageous to take hidden paths that you create, as you may notice a green tile that flies in out of nowhere and places itself on the ground. More of this in a bit.

The enemies are of a greater variety than the first game, and while not all are able to fire projectiles, they compensate with sheer overwhelming numbers. There are small buggers who attack you en masse, hopping spiders, bug-eyed guards who are armed and shoot at you mercilessly, freaking statues that blast you with starbursts, and some damn annoying flyers who swoop in from the sides to kill you while moving in an erratic fashion and later gain the ability to shoot at you. That’s not to mention the bosses; instead of roadblocks, you encounter actual giant creatures that jump or fly around while spamming projectiles and possibly trying to kill you with their claws. For some bosses, you can destroy them piece by piece, blowing holes in their body and taking out their eyes with your grenades. It’s gruesomely fun to do this, but the fun stops when you realize you’ve just used five credits and you’re still on the same boss. The final boss is incredibly mean in this regard; you better have a lot of quarters ready (or a working credit button on your keyboards) for him. 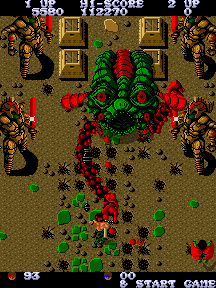 What’s particularly frustrating are these green tiles that fly out of nowhere like the Phantom Zone and perch on the ground, waiting for you to step near them. If so, they open up a chasm that ropes you into a tough fight against either a multi-headed flying dragon or the stone head that insulted you in the beginning of the game. A lot of these tiles pop up throughout the course of the game, oftentimes in the path of your ideal route. There’s no reward besides extra points for beating these bosses; these boss zones (which are entirely colored in a shade of red that will inflict harm upon your retinas) are outright traps that are far better off dodged. You are sometimes encouraged to blow a new path through rocks to avoid the tile, which can be frustrating to angle properly. The overall game is fairly long, made even longer if you keep falling into these things. Sometimes, it’s not easy to get around them, and many a player has declared profanities against the arcade screen because of them.

This sequel does not lose the quarter-munching difficulty of the original, and it’s made even worse with all of the new features. The game is overall longer than the first, though it’s hard to tell if this is due to the map actually being longer or if everything just feels slower on account of the many deaths along the way. The aliens are more numerous and relentless than the human soldiers of the first game. The armor is pretty neat, but nowhere near as solid a protector as the tank, which allowed you to run over small enemies like nothing. The bosses are a nice change of pace, but due to the heroes’ slow speed, they feel less like legitimate fights and more like battles of attrition. Those damn trap rooms are simply aggravating, and there are a few rare situations where you cannot get around them. Most of the new ideas overall feel like hindrances more than improvements, and they all serve to make the game far more frustrating than its predecessor. If Ikari Warriors hurts as much as falling onto a bed of rusty nails, Victory Road sets those nails on fire, increases their length by nine inches, coats them in poison, charges them with electricity, and imbues them with a liquid nitrogen tip that freezes your organs to absolute zero. 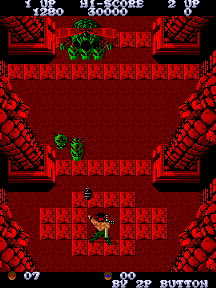 Victory Road does little to improve on the formula of the first game, which is honestly difficult to improve upon without drastically altering the end product. Regardless, it still feels like more could have been done to add to the gameplay instead of just putting Ralf and Clark in space. It feels even more cheap and unfair than the first game, and while the new weapons help a bit, they likely won’t last more than ten seconds on average. Whatever the case, Victory Road feels less like a true sequel to Ikari Warriors and more like the same game in a different setting, something like an expansion pack. Then again, this sequel was released in the same year as its original, so perhaps a bit more development time would have allowed for larger differences. Still, despite a lack of innovation, there’s still something amusing about two Rambo clones taking apart a jumping space crab piece by piece. Like its predecessor, this game is worth a play for its ridiculous premise, though the entirety of the game is ironically less ridiculous than the corpse and commanding officer from the first one.

The NES version of this game is, unfortunately, akin to the NES translation of Ikari Warriors, as it was also ported by Micronics. It has some new ideas implemented to keep it different from the arcade version (and actually make it feel more like a sequel than a rehash), but it’s just implemented so horribly that the arcade version is actually preferable. This version breaks levels up into sections instead of just having one long continuous map. Ralf and Clark are allowed to hold onto weapons indefinitely, and any additional weapons they pick up add to the firepower. Items can also be picked up and held to be used whenever the player wishes, and there are some new items, like wings that allow you to fly around fast or restore all of your life. Yes, the heroes have a life meter this time around, enabling them to take several hits before biting it. The green tiles sometimes lead to mini games that earn you “hearts,” the game’s currency. When killed, enemies leave behind hearts, which look more like malformed ladybugs. These can be redeemed at stores where you talk to a Jawa-esque shopkeeper and either trade your hearts for items or fight annoying enemies to gain even more hearts. 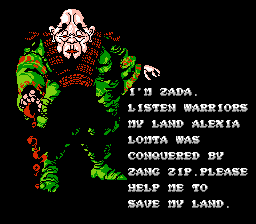 These changes all amount to a hill of beans due to all fundamental aspects sucking terribly. The levels look somewhat different from the arcade version; that is to say, blander. The graphics are poor and the animation is choppy. The controls are off-kilter and sluggish, pretty much as they were in the NES Ikari Warriors. You only have one life throughout the game, but there’s a continue code that can be used infinitely as you die. Why they didn’t just give you limitless continues outright is a mystery. You’ll need that code too if you want to beat it, though it’s not even recommended to play it up to the first level. Even the game’s intro is intolerable, as it goes through four screens of backstory with text that is placed onto the screen, very gradually, letter by letter, as it becomes all spelled out in morse code. At least it’s not mandatory to view, but you cannot skip it once it begins. Just hit the reset button if you wait too long at the title screen… better yet, don’t even plug this into your NES.

At least the other home computer ports are roughly to the same specifications of their predecessors, as most were developed by the same companies. The best looking of these are obviously the Amiga/Atari ST versions, although the Commodore 64 conversion isn’t too bad either. Some versions are also subtitled “The Pathway to Fear”. 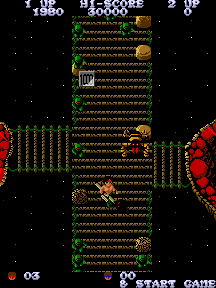 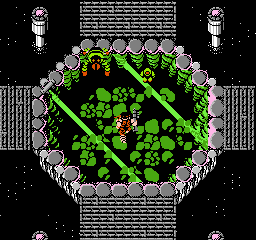 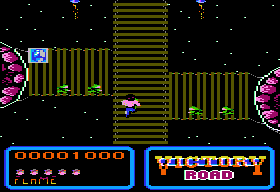 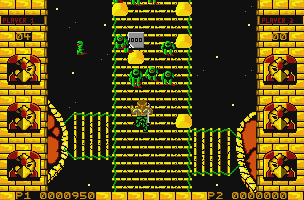 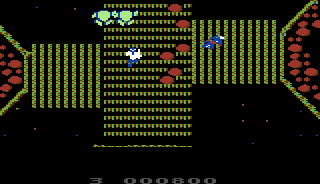 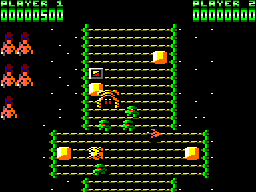 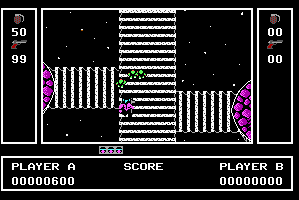 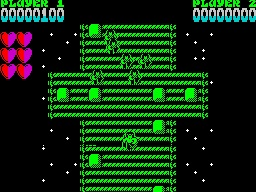