GUNbare! Game Tengoku is the second and last game in the series, developed solely for the PlayStation. The title is a word pun on “Gun” and “ganbare”, meaning “go for it”: the reason is that the game has an unique control scheme. While player 1 uses the pad to control his character, as usual, player 2 can only play by plugging in the PlayStation’s GunCon light gun and shooting away at the enemies. If you feel lucky (do ya, punk?), you can even hold the pad in one hand and the gun in the other and play the whole game this way! No other console game has ever used this gimmick, but honestly, it’s not difficult to see why. 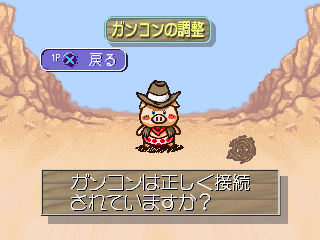 Pig helps you calibrate the Guncon with a showdown at noon.

After an anime intro complete with opening song, featuring all the characters in zany adventures, and another intro featuring Yuki’s narration over a pre-rendered game center, it’s time to start playing, by choosing our character in what seems a crane game. This time the title seems to partially mimic Taito’s Ray series of shooters, especially RayStorm, that was ported on the PS1 a couple years before it. Game Tengoku 2 often uses the same overhead “slanted” perspective and, more importantly, has the same lock-on secondary shot mode. However, the way it’s implemented is not nearly as good: it can only track a few targets at a time, it feels slow and basically tacked on. A cute but useless touch is that every character has a differently shaped crosshair. The options also have been removed. The eggplants are stilll there, but this time they also act as a currency to buy several stuff in the “Omake” screen, including power-ups and video clips. The game keeps track of them, thus forcing you to replay continuously the stages in order to unlock the most expensive things. 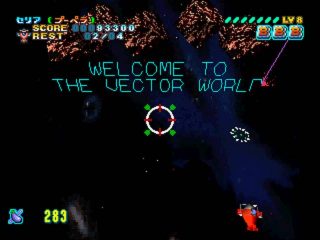 The heroes can still travel through games, but all the stages (except for the unlockable final one) are selectable from the beginning. This means that the title registers the highest score for single stages and not for the whole game. Sorry, maniacs of the single credit completion. Only beating the boss will register the score, though, but this is not a big concern since the new stages are shorter and feel emptier than before. 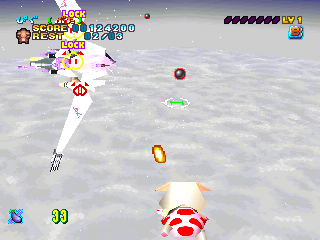 Anyway, in this sequel Genius Yamada is still trying to conquer the world of arcades and our heroes from the past are still coming to the rescue: in fact the game feels more like a remake with polygonal graphics than a true sequel. There’s still a Time Attack mode, the game center stage is pretty much identical and other “parody” stages, like the space shooter and the racing game ones, are likewise very similar. The game even recycles the gag of the enemies devolving to a more primitive graphic display, only this time, since they are made of polygons, they turn into vector graphics (which shatter like glass when defeated). This segment ends with a boss rush against knockoffs of the Andor Genesis mothership from Xevious, the Big Core from Gradius and, after the famous alert screen, Darius‘ King Fossil… being caught on a hook. 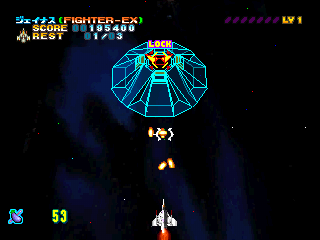 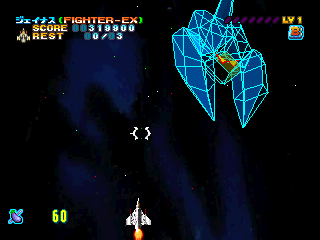 Homage or mockery? You be the judge.

Another stage copies the concept of one of the Saturn port’s exclusive stages, the one set in a retro shop, only this time we’re in some Japanese guy’s tiny room, where our heroes shoot at flying joypads and CDs before getting sucked inside a TV plugged to a Yamada-powered home console. Here they will fight inside two other games: a military simulator, complete with hexagonal tiles for terrain, and what seems to be a horror visual novel set in a haunted school. You even have to make a choice, complete with on-screen dialogue. For no other reason than that it was the late 90s, this area’s boss is a riff on the Tamagotchi, the “virtual pet” that was all the rage in Japan and elsewhere: you have to “play” with it by shooting its buttons until it completes its vital cycle and finally blows up. One stage is almost entirely made up of a boss battle against a cutesy giant robot maid (like Spaceballs‘ Mega Maid if it were invented by a crazy Japanophile). For the final battle with Yamada, our heroes have to enter the cyberspace by using the mad scientist’s own web page as a portal, once again by total chance predicting Wreck-It Ralph, whose sequel features the internet instead of arcade games. 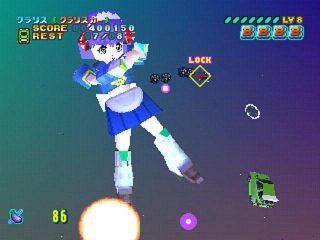 This second effort is notably inferior to the first one: it seems that the developers were more interested in gimmicks like the bizarre light gun idea, and in promoting the new characters, rather than making a good, balanced game. The levels are shorter and less refined, and the eggplant-collecting aspect was probably a means to raise the game’s replayability which is otherwise very limited… not to mention that predictably the gags stop being funny after the first time. The blocky early polygonal graphics make it look even more dated today. The music is better and more remarkable, though. It seems that the guys at Jaleco thought that putting anime clips and sound recordings was enough to appeal to the hardcore otaku: it may have worked, but no one else will find much that caters to them. 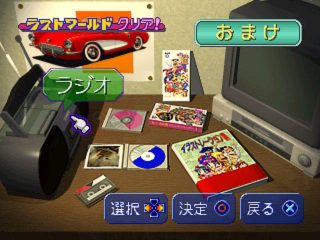 The Anime and Manga of the Game 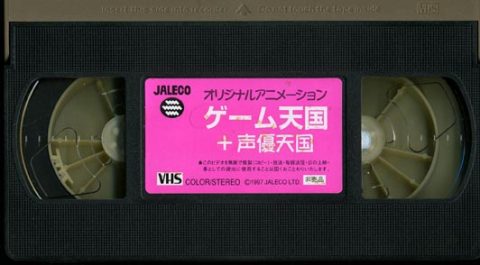 The cassette included with the limited edition game.

As stated previously, Jaleco released a special edition for Saturn users, the “Gokuraku Pack”, which consists in the CD plus a video cassette with about a hour of footage on it. The tape contains a short anime featuring all the characters from the game that lasts about 16 minutes, and the rest is just interviews with the voice actors, who were (some still are) important and respected names in the anime industry and among fan circles. The anime itself was made by Studio Daume, the same one that animated another Jaleco property by making the Idol Fighter Suchie-Pai OAV. As a nod to that, Suchie-Pai herself makes a cameo in this short, being blown up -albeit harmlessly- by Selia.

The cartoon starts with Yuki Ito being assaulted by Yamada the night before the arcade center’s grand opening. Suddenly Momoko jumps out of one cabinet and pulls Yuki into it and inside the game world, where she finds all of the other Jaleco heroes. Disappointingly, outside of a brief Field Combat sequence at the beginning, the actual games are never referenced. The whole story is just the battle against the evil madman and, probably by design, feels more like a parody of anime rather than gaming: Yamada and his assistants are like a gender-swapped version of the Time Bokan series’ villainous trios, his giant robot even has a personal theme song and at one point he does Gendo Ikari’s infamous scheming pose. For the rest, it’s the usual slapstick shenanigans, explosions, cute squealing girls and lots of cartoonish abuse against Misato and the baddies. The short ends with the usual “was it a dream?” cop-out. It’s nothing special, but nicely drawn and animated, and Yamada makes for a comical yet creepy villain.

The second game comes with an anime short as well, that can be unlocked in the in-game shop after having picked up enough eggplants. Just like the game itself, its quality is lower than its predecessor. For starters, the setting is a depressing Dragon Ball Z-esque empty wasteland, Pig and Sakura are never seen flying, everyone is now a moron (Jeynus is also apparently a lolicon) and even Yamada, who was appropriately evil and menacing, lost all his luster. The “funny” part is that everyone crashes into each other before damaging Yamada’s giant mecha, so they have as a last resort to rely on Sakura, who did nothing up to that point. She, after having been fed, obliterates the scientist with a huge beam. And then everyone complains because nobody had a chance to eat. The end. It’s pretty much all the worst anime stereotypes rolled into one (minus the fanservice… wait, Yuki has a Playboy bunny costume for no reason all the time), and the continued abuse against Misato becomes somewhat unsettling.

The leftmost one is the only official product, even if it looks like the opposite.

To promote the PlayStation game, a 2-issue manga was produced in 1998. It was penned by Tatsuya Souma, who was also the character designer and director of the anime included in the game. Souma also made some pretty raunchy stuff in his later career, and some things like Jeynus being attracted to little girls and one of Yamada’s assistants becoming a raccoon girl could be explained with him injecting his fetishes in this work. Speaking of raunchy things, all that otaku pandering paid off with the characters appeared in two erotic doujinshi made by fans for the Comiket of 1997 and 1998. (To be fair, this happens with a lot of video games, even niche ones.) Only the female characters are apparently featured in these, but since among the male characters there are a pig, a giant robot and a creepy old man, that’s probably for the best. 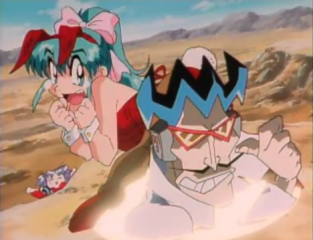 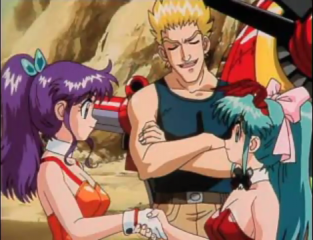 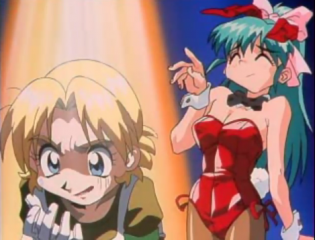 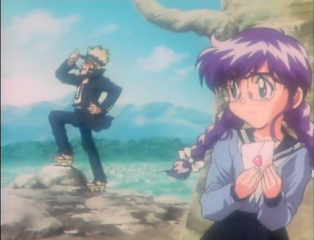 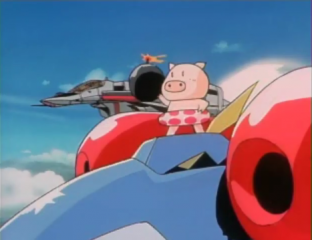 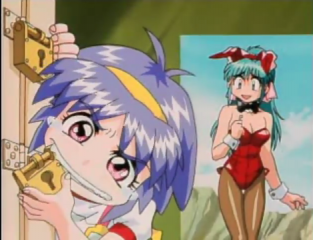 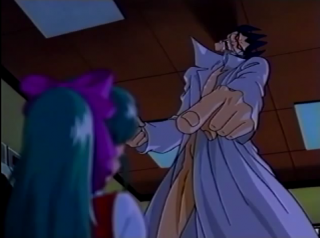 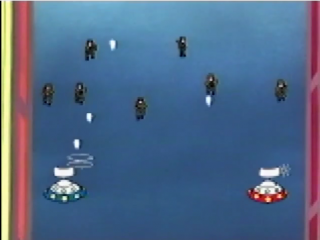 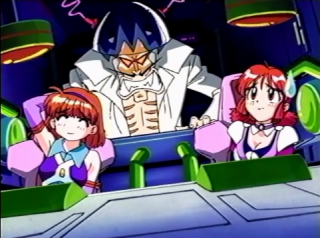 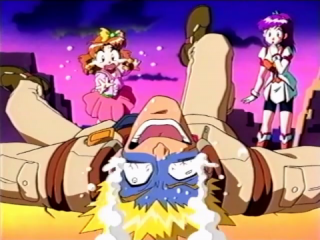 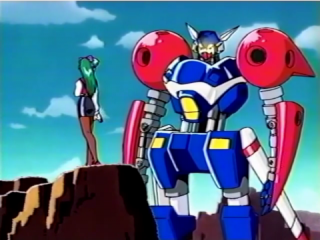 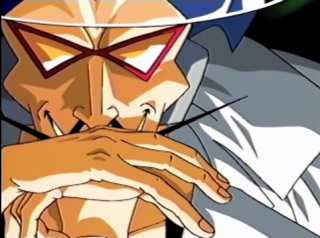 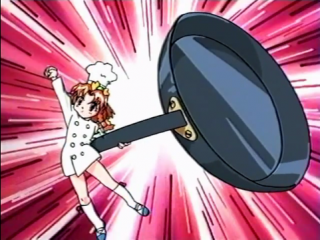 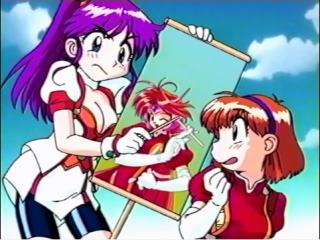