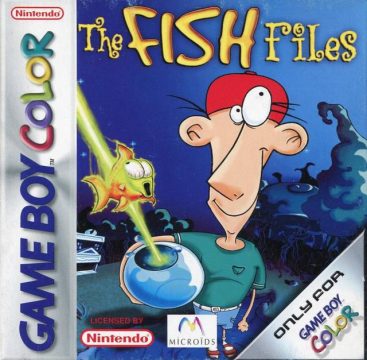 Games released in their systems’ twilight years often get sidelined for newer machines, but few suffered this quite so badly as the Game Boy Color. Unless it’s by WayForward, the GBC’s library from mid-2001 onwards is usually dismissed as worthless shovelware. Though somewhat understandable, this results in otherwise great games being ignored, such as The Fish Files: a Europe-only graphic adventure that takes many cues from classic Lucasarts’ games, and a charming, technically impressive title worth checking out for fans of the genre.

You play as college student Dante, and your beloved goldfish Ramada has been kidnapped overnight by some unknown force. As you explore your college dorm and the nearby town to find her, you soon realize that every goldfish has been stolen! There’s more to this kidnapping than meets the eye, and it’s up to you and your friends, the violent drunkard Fritz and the long-winded geek Fabropulos, to figure it out before it’s too late.

The Fish Files is an adventure game where you walk around, talk to people, interact with items, and solve puzzles in order to progress. Despite the GBC’s handful of inputs (the D-pad, the A and B buttons, start and select), the game manages to craft a control scheme that works very well within those limitations. You directly control your character like in Grim Fandango, and can interact with objects/people that are highlighted by an arrow once you’re nearby. From there, you can either look at them to make a comment or interact/talk with them. Items can be examined in further detail through the inventory, which is accessed by the pause menu. Here, you can use an item (though only when near a highlighted object its meant to be used on) or combine it with another item to make something new.

Granted, the simplified controls mean you don’t have as much freedom as adventure games with verb tables or multiple methods of interaction, but it allows you to do everything you need with little to no hassle. Perhaps the only issue is that you have to stand in certain spots to highlight an object, which can be awkward when you don’t know what you’re looking out for. While most of the interactive objects are designed to draw your attention, a handful of important pieces can be easily missed because you weren’t standing in the exact spot needed to highlight it. The option to highlight every interactive object onscreen with the select button (which goes unused outside the inventory) would have been appreciated.

Apart from the controls, it’s a pretty straightforward adventure game, with nearly every puzzle revolving around using or combining items, or talking to people for information or help. This can be somewhat repetitive, but at least your progress isn’t being stalled by a poorly done action sequence or an abruptly difficult type of puzzle you’re not familiar with. The tricky bit with these types of games is simply knowing what to do, and The Fish Files mostly does a good job of communicating that without giving the solution away.

Descriptions of items and random points in conversations often clue you in and don’t require huge leaps in logic to connect them together, allowing you to solve puzzles and move forward in a satisfying manner. That said, it can be easy to get stuck due to how things are occasionally presented. At the beginning, you’re allowed to explore a lot of places and pick up various items without knowing what most of them are meant to do, which can be overwhelming enough to leave you uncertain of how to progress. Not helping this is how the game sometimes allows you to solve puzzles in any order so long as you have the required items, but other times won’t let you for no reason. This wouldn’t be so bad if it just hinted you do things in the required order, but it doesn’t and makes it feel like you’ve missed something.

Thankfully, the solutions are often intuitive enough that you’ll be able to figure them out after a while (and feel silly in hindsight for looking up a walkthrough), so you won’t be stuck for too long. This generosity extends to other parts of the game, such as the ability to save whenever you like, and a lack of unwinnable or insta-kill scenarios that force you to start over.

The only particular issue with The Fish Files is how little fluff there is: you won’t get a reaction from showing characters an item unless it furthers the plot, and while you can choose how to reply to someone, they mostly lead back to the same response. On the one hand, this makes getting through the game a bit easier without being subjected to red herrings or needless dialogue, but this also takes away from one of the unique appeals of the adventure game – being able to mess around and find amusing tidbits or conversations. It makes repeat playthroughs less rewarding, since there’s nothing to come back to once you know how to solve the puzzles.

It’s especially a shame since the story is enough of a bright spot that more throwaway dialogue would’ve been welcomed. The writing is consistently tongue-in-cheek, with the plot about kidnapped fish featuring 90s pop cultural references (particularly towards The X-Files), a variety of suggestive situations such as drinking contests and lingerie theft, and even the odd fourth-wall break. This has the potential to be lame and self-obsessed, but is rescued by how confidently it’s mixed with charming character writing and amusing non-sequiturs. While it doesn’t reach the comedic heights of Broken Sword or Ace Attorney, it’s a very likeable game.

Considering this was made by an Italian developer, it’s also worth praising the English localization for how well it’s written. The grammar and punctuation are almost always correct, puns and references are weaved naturally into the dialogue, and it’s all written so naturally that it feels like it was done by a native English speaker.

Perhaps the most striking thing about The Fish Files is its visuals. Character sprites are big and appealingly expressive, but what stands out even more are the backgrounds. They’re meticulously detailed, featuring stylized locations right out of a late-90s adventure game rendered with so many colors that they look gorgeous on the GBC’s small screen. This was accomplished by utilizing what’s known as the system’s ‘Hi-Color’ mode, where manipulating palette registers could allow for as many as 2000 colors to be displayed onscreen at once. Not many games used this (the other notable example being the port of Alone in the Dark: The New Nightmare), but it’s put to excellent use here.

What doesn’t work quite as well is the soundtrack by Simone Cicconi. It has a nicely crunchy, Commodore 64-esque sound you’d often hear from European Game Boy games, but it suffers from very repetitive compositions. When there’s only a handful of songs used throughout the game, with each one being used for the game’s six fairly long sections, they become mind-numbingly grating to listen to.

Despite a couple of jokes near the end about getting a sequel, The Fish Files didn’t receive any continuation. However, 7th Sense did use the same engine to develop an Addams Family adventure game for the GBC in 2002, which might also be worth checking out if you enjoyed this game.