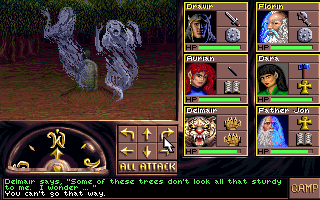 Like the second game, Eye of the Beholder III continues the story of your well fought adventurers. Resting in an inn, again, sometime after the events of the previous game, our heroes are approached by a mysterious man (Ed.: I’m sensing a pattern here…) asking them to help liberate the city of Myth Drannor from an evil lich who has taken control of the area. True to form, our heroes accept and are immediately teleported away and soon find themselves in the middle of a spirit-infested graveyard.

Although Eye of the Beholder III remains unchanged at first sight, there were some changes from its predecessors, most notably being the absence of Westwood Studios as the developers (who went on to create the Lands of Lore series). Instead SSI developed the game in-house using a new game engine, SSI’s very own AESOP/16 engine (also used for the SSI game Dungeon Hack). While the game did bolster larger environments to explore and impressive looking enemies, it was hampered by the performance of AESOP/16. Not only did the game have high hardware requirements, but it would skip and stutter along choppily due to poor memory management. This is immediately off putting, as the slow-down during battles causes the game to drag along where the previous two games played very quickly.

Even when setting the performance issues aside, Eye of the Beholder III still falls short of the success garnered by its predecessors. While it is very much the same game, the level design was expanded and enemy difficulty was ramped up. The larger levels bring back the same headaches found in the first game. More often than not you’ll find yourself aimlessly wandering around searching for a small switch on a wall or a hidden door just to progress in the game. Factoring in the unbalanced difficulty of the enemies, who can now kill your characters in just a few hits, you’re left with an experience that just isn’t enjoyable.

While the concept of tougher enemies and a larger game world to explore may look good on paper, SSI went about implementing it in the completely wrong way. There are even instances where you can get yourself in un-winnable situations, as certain areas in the game require you to have specific characters with specific spells and no way to backtrack to fix this. All of these design decisions result in a game that feels like a chore to play.

Overall, Eye of the Beholder III remains merely a shadow of its predecessors. The maze-like maps, unbalanced difficulty, and lag issues all overshadow any potential the game has. While it seems as though SSI did intend to end the series here (there is no save data created for importing characters at the end of this game), with the poor reception it received upon release, making any more sequels wouldn’t have been wise, anyway. Instead it stands as a depressing low end to a trilogy that started off great.