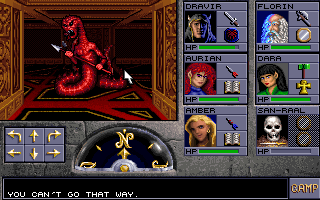 Picking up where the first game left off, the story begins with your group of adventurers resting at an inn in Waterdeep after their underground adventures, when they are contacted by an Archmage who wishes them to investigate strange happenings in a temple called Darkmoon. The Archmage transports the heroes to the temple, and the new adventure begins. Just as in the first game, you are then given the option to build your own characters or import the characters you created in the first Eye of the Beholder. If you choose to import a party, they will retain their skills and most of their armor. This makes the game much easier, as imported characters should already have excellent equipment and spells very early on.

As you progress through Darkmoon Temple, you find that the institution is a cover up for the evil wizard Dran Draggorn. It seems he is amassing an army of undead, and plans to take over Waterdeep. Upon confronting the vile sorcerer, you discover that he was also behind the events of the first game, having struck a deal with the Beholder Xanathar.

Right away it’s easy to see that not much has changed from the first game to the second. The game still looks very much the same, and combat remains as it was, as well. The most notable change, however, is the level design and overall complexity of the various floors. The size of each floor was cut down significantly, resulting in more straight forward exploration and less convoluted level design. Although the game still retains some tiles that would teleport your party or spin them to throw off your sense of direction, their amount was drastically reduced, resulting in a more streamlined and enjoyable experience. Characters also comment on the possibility of secret doors being nearby, which helps to keep things from becoming too frustrating.

It also becomes apparent that the role-playing aspects found in the game seemed to be more of a focus compared to those in the first. You’re given more dialogue options while interacting with the few NPCs included in the game, but ultimately your choices usually result in the same outcome. More puzzles and riddles were also included, but they seem to serve as nothing more than a way to extend the game’s length as you often find yourself having to backtrack to pick up an item that you just so happen to need to unlock a door. This comes off as a bit frustrating, but thanks to the smaller levels, backtracking isn’t that much of a pain.

Overall, Eye of the Beholder II feels much more fleshed out and streamlined than its predecessor. While the combat and roleplaying aspects still remain fairly shallow, the level design makes it much more enjoyable to explore.

Like its predecessor, Eye of the Beholder II did receive ports for the Amiga and Japanese computers; though it was never brought to any consoles. The differences are once again marginal, aside from the Amiga’s fewer colors.