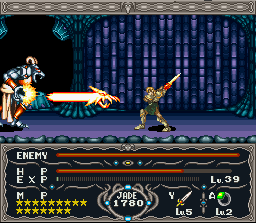 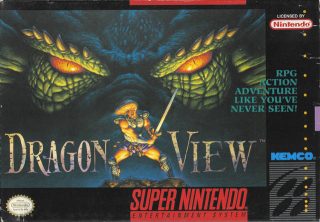 In 1994, Kemco made Dragon View, also known as Super Drakkhen in Japan. Although Kemco had already ported Drakkhen to the SNES, this “sequel” plays nothing like it, aside from the first person outdoor scenes. Random encounters return, but this time they appear as clouds roaming the country so that you can avoid them if you need to. The biggest difference is that the game turns into a side-scrolling action RPG when you enter towns and dungeons. Although the graphics are quite a bit more detailed, they aren’t nearly as charming as mostly everything is as you’d expect in your average console RPG. The bizarre monsters and the eerie soundtrack from the original… all are gone! On its own it’s a decent game… it just doesn’t really seem anything like Drakkhen