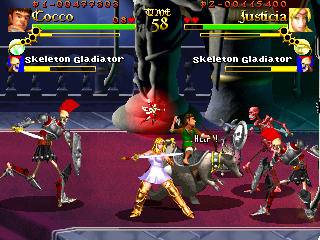 The Crystal of Kings is an extremely rare arcade scrolling fighter developed by BrezzaSoft, a small team made of ex-SNK developers, who worked on The King of Fighters 2001 as well as Metal Slug 4 and 5. As a beat-em-up released in 2001, it boasts very high-quality pre-rendered graphics, and a morality system that determines whether you get a good, neutral, or bad ending. Unfortunately, the gameplay is far behind the curve, resembling late 80s brawlers like Golden Axe rather than more contemporary, advanced brawlers such as Guardian Heroes or Gaia Crusaders. 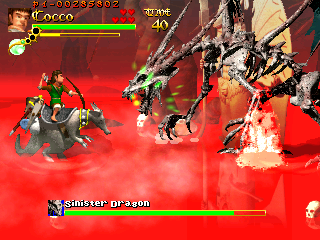 The story involves the eponymous crystal, The Crystal of Kings, being used by the main villain Night Spirit, to try to douse the world in darkness. It’s up to four heroes, led by a hobbit hilariously named Cocco, to stop him. The story and many of the levels take so much inspiration from Lord of the Rings that it could almost count as plagiarism. There is a decent variety of enemies, including orcs, elephants, minotaur, trolls, skeletons, eyeball monsters, and even more outlandish stuff. The bosses are all huge, many of them being so big that they are unable to fit on the screen.

There are four characters to choose from in The Crystal of Kings.

The main hero and most ridiculous character in the game. He’s basically a hobbit riding on a killer anteater. He uses a bow and arrows to fight, giving him the most range out of all characters. If you’re unlucky and are hit enough times low down, his mount will die and you’ll have to fight on foot, removing a lot of your combos. He also has earth magic, which is very strong and good for clearing out crowds. His ultimate magic summons a horde of killer anteaters to ravage the battlefield.

A swordsman that is a master of fire magic. He looks pretty generic and his attacks aren’t particularly interesting. His ultimate magic summons a dragon to fly over and burn everyone to a crisp with its fire breath. He has an unlockable alternate skin you can get by holding up for a few seconds before selecting him. It makes him look a lot like Conan the Barbarian or Rastan.

A powerful wizard and master of electric magic. He bears a strong resemblance to Ming The Merciless from the old Flash Gordon serials, which is a little disturbing. Lung Xing fights with a staff and can turn his fists into electricity. He hits the hardest out of all of the characters, though he does not move very fast. Lung Xing’s ultimate magic summons a thunder titan to zap everything on screen.

An elf girl that wields a sword and uses light magic. She plays pretty similar to Lustro Furia, but faster and with better magic. Her attacks have the worst range, though. Justicia’s ultimate magic is the best magic in the game. She summons an angel that hurts all enemies and heals all players. She’s a great support character in two player and good on her own as well. 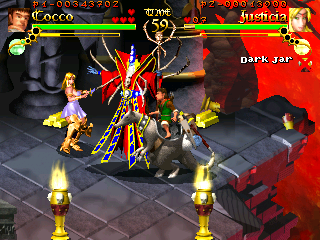 The battle system is pretty basic. Each character gets attack, jump, guard (hold down and jump at the same time), and magic commands. Crowd control moves eat up a bit of health, but are also available and very useful – you do these by pressing jump and attack together. You can do combos by mashing the attack button or by rolling the joystick forward as though you’re doing a special attack in a fighting game. You can also do a dragon punch motion followed by the attack button to execute a popup or anti-air attack.

The magic system is similarly basic. You increase your magic meter by picking up potions and use magic by simply pressing the assigned button. There are four levels of magic, each one getting stronger as you increase your magic meter. Pressing the magic button uses the strongest magic available to you at the time, though you can use lower levels of magic by doing complicated input commands.

What was supposed to set The Crystal of Kings apart from other similar games, was its morality system, which determines your ending. Your crystal level starts in the middle, so you have a choice of whether to work for a good or bad ending. If you do enough good things, such as kill enemies, save fairies that give you random buffs, and finish levels as fast as you can, you’ll see messages saying “crystal up”. If you can max out your crystal level, you’ll end up getting the good ending. If you manage to do enough evil, however, such as picking up gold, orphaning children, breaking gravestones, or finishing levels slowly, you’ll start seeing “crystal down” messages. If you get your crystal level at its very lowest, your character’s appearance will change into their evil version, which is really just a palette swap to mostly darker colors. You’ll also fight one of the playable characters you aren’t playing after the battle with Night Spirit and get the bad ending. If your crystal level is not at the maximum or minimum, you’ll end up getting the neutral ending. 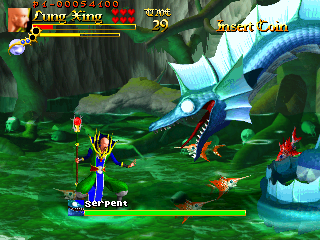 The morality system offers its own set of strengths and weaknesses. If you plan on being good, you’ll have to settle with a low score because the most common scoring objects, money, lower your crystal level. Likewise, earning an evil ending is very difficult. Not saving fairies means you don’t get their bonuses and you have to fight an extra boss at the very end. You also have to work very hard to be evil, mostly because killing enemies is considered a good action.

At the end of each level, you get to see how you did and get a score based on it. You get a higher score based on your clear time, kill count, and how many fairies you saved. There are other score buffers, such as the aforementioned gold you can find lying about or dropped by enemies. There’s also a yellow fairy that increases your score as long as it follows you, but getting it when you break open a fairy cage is a random chance.

There are eight levels in total, though they’re all fairly short. It’s not a very long game, even for an arcade title, and can be completed in around half an hour. It’s obviously going to take longer if you’re trying to get the evil ending though. The game is not particularly hard until it shoots up like a rocket at the final boss, who has two forms and is invulnerable most of the time. 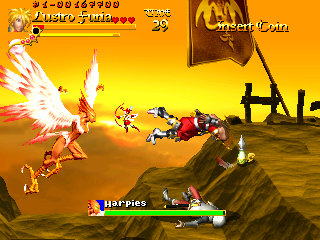 Interestingly, The Crystal of Kings was designed specifically for the Zealer Board arcade hardware, which was developed by AD Chips in Korea. Several games were developed for it and they ran off cartridges, as seen in the above photo; known to many as the Crystal System. It used – for the time – very advanced graphical effects, though character models were pre-rendered, so they end up looking dated and sometimes a bit ugly. Some of the more impressive effects include the ripple reflection used in the level where you’re fighting ankle deep in blood. Another one is the fade-in and fade-out effects, used by teleporting enemies or during respawn time after being hit. Even though pre-rendered graphics never truly caught on, The Crystal of Kings shows the kind of things hardware can do with it when used properly.

The Crystal of Kings never received a sequel, though this might also have something to do with its rarity and very limited release. It was only released as a conversion kit, so there are not many actual dedicated cabinets. Adding more to this perfect storm of obscurity is the fact that it was only released in Asia and Australia.

Photograph of the arcade artwork taken from a French forum.