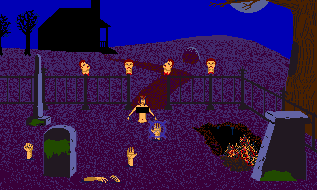 Exidy were one of the first names in the arcade business, having been around since the mid-70s, putting them in competition with Atari’s arcade division just when they were starting. Even with a history like that, however, they’re never remembered quite as fondly as, say, Taito. A lot of their games are decent, to be certain, even if few of them could really be called groundbreaking. One particular exception being 1976’s Death Race, a once very controversial game about running over stick figures with your car. As violent as that game was, however, that had nothing on one particular lightgun game they released a decade later.

From the basic gameplay mechanics, Chiller doesn’t sound too odd. You’re given four different stages, each of which tasks you with using the cabinet’s mounted gun to shoot enough targets to bring the “Monster Meter” down to zero before time runs out. None of the targets themselves will ever actually attack you, meaning that the only threat of failure comes from running out of time. The difficulty comes from the fact that a lot of the targets tend to move around, or tend to have a particularly small hitbox, or, in plenty of cases, both. Once you hit enough targets, you move on to the next level, and once you clear all four stages, the game loops until you run out of time, thus ending the game.

Before each stage, you’re also shown eight hidden targets somewhere on the screen to blast. Since you’re only shown what they look like, not where they are, these are a little trickier to take out. If you shoot all the hidden targets on a level and finish a screen, you’ll be taken to a slot machine bonus round, where you have the chance of winning bonus points, or, if the planets align and you get hit by lightning while holding the winning lottery ticket, a free game. Hitting all 32 hidden targets brings you to a bonus round, where you’re tasked with shooting fast-moving targets for massive bonus points. And that’s more or less the entire game, continually looping and getting more difficult until your game ends, in traditional arcade fashion.

If you described the game to somebody like this, you wouldn’t be lying. But that would be excluding the fact that the developers of Chiller had something deeply, deeply wrong with them. The truth is, Chiller contains an unfathomable level of violence for a game from 1986, or possibly just about any other game from the 80s. 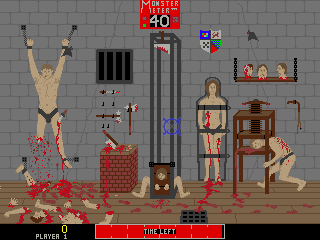 The first two screens are set in different parts of a torture chamber, where the game wastes no time establishing itself. There’s human victims chained to the walls, with blood and severed limbs all over the floor. Despite the predicament of the folk you’ll encounter, you’re tasked with shooting these defenseless people until they’re left into little more than person-shaped piles of blood and bone. Merely shooting these people in some attempt to end their suffering doesn’t please the game, however, so you’ll have to make use of the various devices on display. There’s a guillotine you can shoot to make it drop on a woman’s head, a vice to pulp another guy’s head, racks that tear two victims and half, and a man slowly lowered into a literal river of blood, where he’s eaten piece by piece by an alligator. 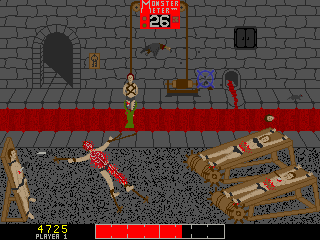 It should be noted that the game has absolutely no story anywhere in it. Who you’re supposed to be, or why you’re doing these things is never elaborated on, and that makes it all the more disturbing.

The next screen, the Hallway, moves from… whatever the previous two screens were into something that’s much more typical horror. There’s no mutilated bodies to be found here, just lots of ghosts and wolves that move in and out of the doors in the hallway, a skull that pops out of a hole in the ground, and a monster head that can have its eye shot out. Certainly nothing quite as psychopathic as the last two screens. This is where the game itself gets a lot more difficult, however, since you’re dealing with targets that actually move around. You also won’t often get as many targets on screen as you’d like at once, which puts you in real danger of running out of time if your reactions aren’t pretty quick. Compared to the rest of the game, even shooting a severed head that falls out of the ceiling just feels so… tame. 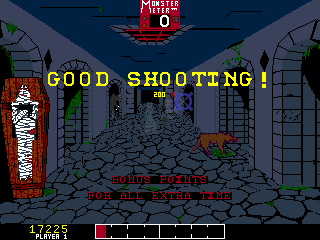 The final screen, the Graveyard, is where things take more of a return to form. The first thing you’ll probably see is the woman buried halfway into the ground, where she can be shot to remove her clothes, exposing her breasts. And then because it’s this game, you can continue to shoot her until you’ve blown her apart. Other than that, you’ll primarily be shooting at the zombified hands tugging out of the ground, the birds flying across the sky, and the occasional zombie that pops out of the ground to throw its own head off the screen. There’s even a monk that carries a wheelbarrow of severed limbs across the screen, but in a massive display of misplaced priorities, shooting him only makes him turn around and leave the screen. 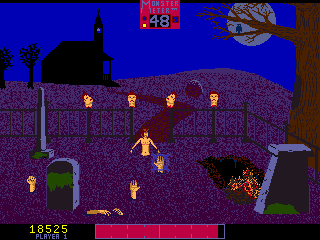 Truthfully, once you get past the massive levels of violence, Chiller‘s not a particularly exciting game. It’s basically just a glorified shooting gallery, where the only challenge is trying to see how far you can get and how many points you can get before you inevitably lose. Even the folks who typically go for video game violence are probably going to end up uncomfortable, given that the violence is typically brought against people who are bound up and helpless. There’s just something about it that feels deeply wrong, which makes the game rather difficult to truly enjoy. Not that there’s that much substance beyond the shock to enjoy. Still, it should at least be noted for a game of its era with so much violence, even if it’s difficult to call that an achievement.

Four years after the release of the arcade version, an NES version would eventually appear. As you’ve hopefully already imagined, this was an unlicensed release, given that not even Sega would probably allow this game within 500 miles of any sort of official approval. It’s a pretty faithful port, with the biggest change in gameplay are that the levels are now played in reverse order. You can also play with the Nintendo Zapper, which is slightly more comfortable to use than trying to control the fiddly cursor with the controller. This version also has a lot less blood, although that’s more than likely due to technical limitations than any sort of censorship. The torture chamber doesn’t have piles of limbs on the ground, for example, and the guy who gets his head chopped off in the torture chamber doesn’t bleed, but you’re free to shoot the victims to pieces, just like the arcade version. 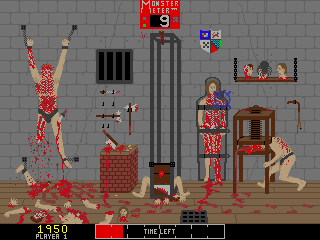 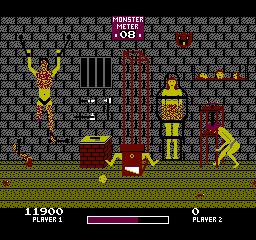