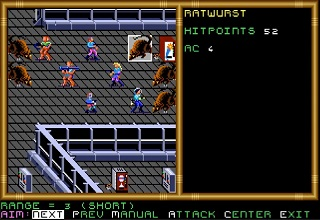 Buck Rogers is one of those classic franchises that most people are at least somewhat familiar with, especially in the United States. The original comic book strip ended its original run in the late sixties, but the series enjoyed a short-lived popularity in the eighties, thanks to the 1979 movie and, also, for being referenced in Steven Spielberg’s ET. In the late 80s, TSR designed a game setting and tabletop RPG, Buck Rogers XXVC, which in turn led to SSI – famous for developing titles based on the AD&D license – to develop two RPGs: Countdown to Doomsday and Matrix Cubed.

The setting introduced a futuristic war in the 25th century between superpowers RAM (Russian American Mercantile corporation) and NEO (New Earth Organization) for control of the plans for re-population of Earth. In 1990’s Countdown to Doomsday, the members of the player’s team are introduced as cadets for NEO, assigned to put a stop to RAM’s plans to sterilize the Earth. The titular hero Buck Rogers shall, indeed, make an appearance, as a NPC who will save the team from prison and join for a short while. Mostly, though, he will act as commander, giving the team missions, along with his partner Wilma Deering. 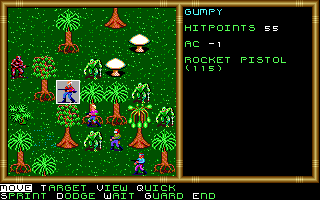 Designed by SSI veterans Bret Berry and Graeme Bayless, released for MS-DOS, Amiga and Commodore 64, Countdown presents only minor graphical/sound differences between each version. Since each computer had different memory specifications, Countdown is designed to be played with a physical Log Book at arm’s reach, used to enrich the in-game encounters. This allowed the programmers to release the same title on different systems, without having to modify any of the original writing.

Despite being the first sci-fi title for SSI, the in-house developed engine Goldbox provides the backbone for the series, previously employed for Champions of Krynn and Secret of the Silver Blades. On the home computer versions, the player explores via a small window in first person view, while statistics fill the rest of the screen, like members’ status and available options selected via keyboard-friendly interface. The spare first person graphics work fine for standard size maps, but being left with no visual clues of any kind becomes problematic in larger areas. 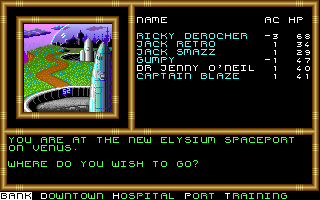 Before adventuring, it is required to create characters to fill a small team, with six different races and five character classes to choose from, ranging from desert rider rocket-jockeys to human warriors. There is a massive number of abilities to select from but, even after extensive playing, it seems most of them are used once or twice in the whole story. Also, despite training them to 99, there is still no guarantee that one will succeed most of the time.

The turn-based combat is played out in isometric view. For every attack, the system calculates the player’s chance of hitting the target and potential damage, even though its predictions seem rarely accurate. The lack of different altitudes and fully implemented cover system, contribute to make combat kind of tedious. Different combat abilities will influence the outcome of the battles, finding out how each one interacts seems to be mostly a matter of trial and error. Turn-based space combat is the big addition from other SSI AD&D Rpgs, a welcome addition that is sparingly used, with only one plot-required space dogfight in the whole series. 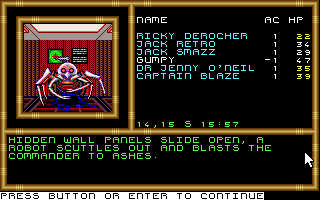 Countdown to Doomsday was the only RPG from SSI to receive – at the time – a direct conversion on a Sega console, published by Electronic Arts. The development team, led by Tony Van, went about slightly tinkering with the design, making it more approachable but, as a whole, not less unforgiving. The team now explores in third person view, through a bigger window: the player controls a single sprite representing the team. The RPG features a full soundtrack, as opposed to the couple of tunes that play occasionally on the home computer versions. Gone is, naturally, the Log Book, which would make little sense for a console audience; the events and encounters are fully described via in-game text, with some necessary minimal cuts. The character creation is simplified, featuring less races and character classes, along with less skills to choose from, keeping the basic ones for each character’s class. Overall, a pretty efficient design choice.

The conversion of Countdown to Doomsday was met with mostly positive reviews from UK & US magazines, which praised how the dev team worked without compromising the original gameplay, leaving its depth and combat system intact; one of the more solid early 16-bit RPG offerings. 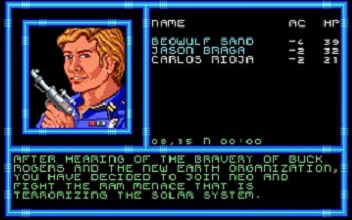 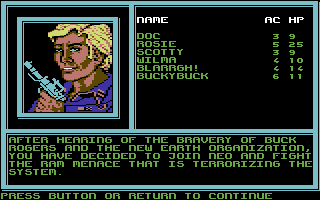 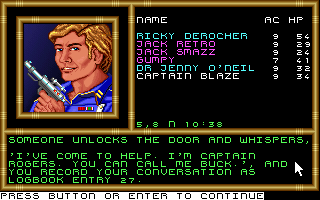 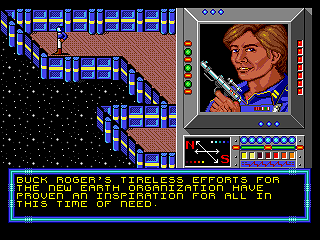 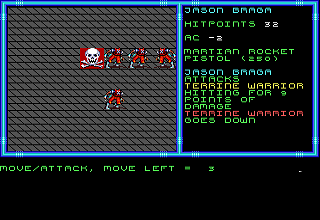 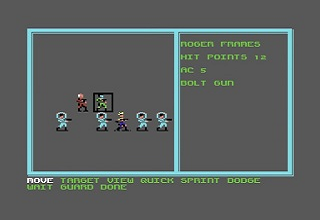 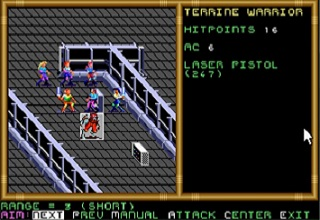 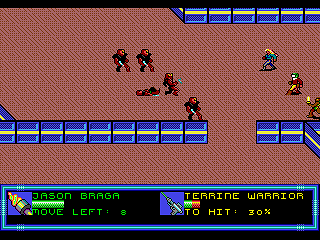 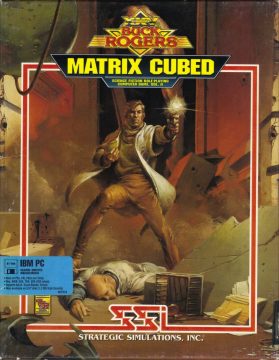 Matrix Cubed, a 1992 direct sequel, was designed by Rhonda Van (Tony’ spouse), writers of some of Countdown’s encounters; despite being announced for Amiga and MS-DOS, ended up as a PC exclusive. According to programmer Kerry Bonin, there was a serious bug in the game engine that ended up requiring a logic analyzer to track it; by the time they realized what the problem was, management decided to focus more on PC than Amiga. Design-wise, Matrix Cubed features the same interface, log book and combat. Character creation is left untouched, even though the gameplay makes more extensive use of the characters’ specific abilities.

The plot picks up from the end of Countdown: after preventing RAM’s plans to destroy Earth, commander Buck Rogers sends the team to find out about the existence of the Matrix Cubed, a technology to re-fertilize and restore life on Earth. Instead of RAM, there is another villain: a Terran organization called P.U.R.G.E which seem bent on eliminating otherworldly non-human creatures. The evil human cyborg at the helm of the KKK-like cult is named, not joking, Sid Refuge and he is also after the device. 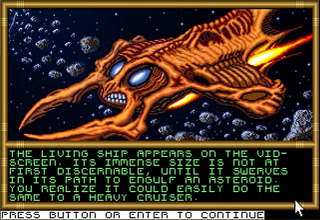 Matrix Cubed is a longer adventure than the original, featuring less places to explore but longer levels and higher number of battles. The stakes are definitely lower, since refertilizing Earth does not really carry the same gravitas as saving it from eternal destruction. While the planets are mostly the same from the previous title, there are a couple of new points of interests: the capital Losangelorg is now explorable as well as Jove. The most unique setting is the living ship, which the team will need to heal in order to receive assistance in the final battles; unfortunately, the levels inside it are mostly made up of busywork. Matrix Cubed’s final two hours will test many gamers’ patience: an onslaught of unskippable drawn out battles to get to a disappointing ending with a couple of swift thanks and the game exiting directly to DOS with no warning.

Buck Rogers, while being the team’s direct commander, will also – again – join for a brief period of time, but his role is diminished; even worse, Wilma Deering is only seen briefly. While the writing does touch upon interesting topics, such as pondering on racial politics, the overall design feels dated for 1992. The same year saw the release of RPG staples like Ultima VII and Underworld, Matrix Cubed feels, essentially, like an RPG from a previous generation.

Reading some of the articles about the series, as few as they are, it definitely feels like no one at SSI really understood the management’s decision to acquire the Buck Rogers license. Despite the software house not having experience with sci-fi, the writers and artists did their best with what they had to work with. The idea of featuring an AI, SCOT.DOS, as a companion and guide is the perfect way of making the player feels less lonely. SCOT.DOS is also infinitely more memorable than Buck Rogers himself.

The writing in the series does not shy away from topics such as death, politics and relationships between different races; two scenarios from Countdown, in particular, are worth mentioning.

The first is the RAM ship The Maelstrom Rider: the team climbs aboard to find it full of mangled corpses, unearthing recordings that tell stories of horrible experiments gone wrong, encounter organisms that mutate and evolve right before their eyes (gennies). It is expertly narrated, even featuring a couple of twists and turns, along with cliffhangers: a delicious slice of Alien-like space horror.

The second is Venus, the team finds it gutted by RAM, villages devastated and its people – the Lowlanders – slaughtered. Entering a village ravaged by the soldiers, a distant baby crying is heard and he is found, among dead corpses and RAM assassins. His mother was killed, so the team is forced to find someone who has managed to survive and entrust the child to them. The team shall also take control of the kid during battles: keeping him out of harm’s way, while not really required by the plot, feels like a mandatory moral choice. The harrowing tale of the Venusian child that somehow survived in such a lugubrious environment, still willing to go out to fight RAM soldiers is one of their earliest gaming narrative that I remember bringing me almost to tears. 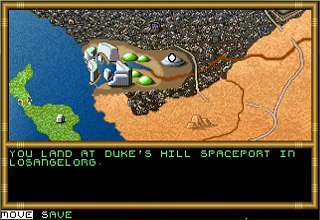 Despite SSI’s limited experience, the strong writing and experienced artistry still manage to shine through a RPG system that hasn’t aged well. It’s worth checking out the 16-bit version of Countdown to Doomsday, for a more modern experience which still retains the unforgettable scenarios and characters.