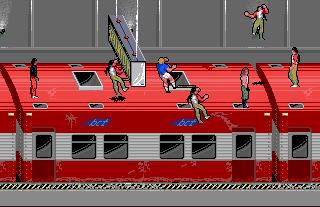 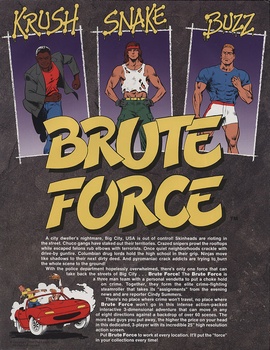 Beat-em-ups are simple and fun, which also led to a lot of samey-ness. While most games strived to be respectable clones of Double Dragon and/or Final Fight, you’d occasionally have one that did something radically different, like Brute Force by the Leland Corporation. 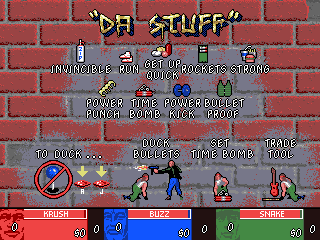 Leland was essentially a rebranding of Cinematronics, the pioneers of the laserdisc action genre with Dragon’s Lair and Space Ace. When Tradewest bought them and they renamed themselves to Leland, they released Dragon’s Lair II but effectively ended their laserdisc output and focused more on conventional graphics. With the possible exception of Ironman Ivan Stewart’s Super Off Road, most of the games they released around this time dropped off into obscurity, including Brute Force. Two things worked against Brute Force: It was released the year when Street Fighter II eclipsed beat-em-ups, and it was not a particularly good game. 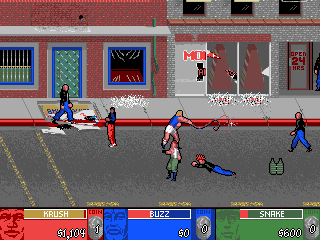 Brute Force did have potential, and it feels like it could have been done better considering its somewhat unique gameplay, which can best be described as a cross between Double Dragon and Smash T.V.. Allowing for up to three players, you either play as Krush, Buzz, or Snake, ostensible tough guys who beat up baddies while respectively wearing red jeans, soccer shorts and tank tops. They seem to be some sort of vigilante trio who listens to crime announcements from newswoman Cindy Summers on a big screen television in the local electronics shop, since they’re apparently too poor to afford their own set. 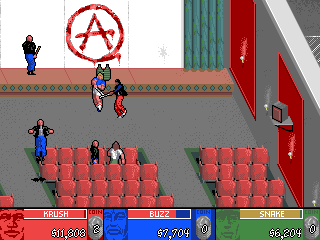 Each stage has the heroes travelling from the TV, down the street and towards the hideout of whatever baddies they’re pursuing. The first stage has you punching out skinheads all the way to a movie theater where they’ve spraypainted a big red anarchy “A” on the film screen. Future levels have you taking on vandals in ponytails, shirtless ninjas, and in a flash of poor taste, clearly Arabian terrorists who keep throwing grenades at you. It’s a somewhat clever gimmick that you’re technically on the same city map throughout the game, and each new level brings you to a different part of the map, though it can be seen as slightly lazy since you re-tread a few familiar streets. 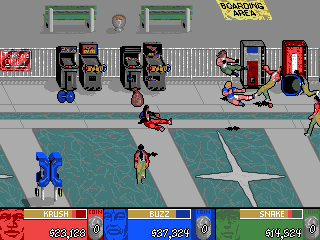 By default, you take on mooks with punches and kicks mapped to one button, and a dive attack on the second button to lunge at enemies from afar. You can also crouch and pull off jump kicks by pushing both buttons, though that’s as advanced as your base movelist gets. The real meat in Brute Force comes from all the weapons you can find, including but not limited to bottles, whips, machine guns, Molotov cocktails, and other such destructive goodies. Not only do these greatly enhance your whoopin’ potential, but you really should grab them when you can before enemies steal them first and use them against you. It’s tough enough trying to kill them unarmed, as the hit detection tends to be a bit problematic, especially when attempting diagonal attacks. The odds are constantly against your favor as bad guys rush in from every corner of the screen, so this is definitely the sort of game you want to play with one or two other players to get the most out of it and make things slightly less frustrating. It’s actually pretty bland to just play on your lonesome, and despite its uncommon eight-way view, it feels like a step back from the beat-em-ups Capcom and Konami released around 1991. 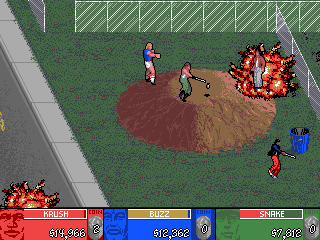 All the weapons you get are pretty neat, but it’s hard to shake the feeling that the game otherwise lacks variety. While you take on different types of thugs for each new level, they all attack the same with generic punches and kicks, with variety only in the weapons they bring. While some hooligans seem to be occasionally tougher than the rest, you don’t face any unique bosses, not even at the very end of the game. Maybe it’s for the best there aren’t any special enemy units, because they’re all cheap enough as they are. Even on three-player sessions, death can and will occur frequently thanks to your characters apparently being made of tissue paper. It only takes a few hits from anyone to knock out a life, and though you can get some power-ups to make you faster or do more damage or whatever, it’s never enough to make you feel stronger than a punching bag. 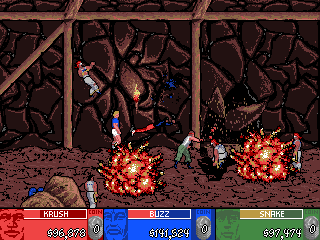 Even the stages screw you over every now and again, like the rooftop stronghold level and treacherous windows which give way if you step on them and instantly cost you a life. Even worse is when you fight goons on top of a train for entirely too long, and if you haven’t learned how to crouch (which is an ad hoc move that you are never required to do anywhere else in the game), say goodbye to a clump of quarters as passing signs perpetually knock you off into high-speed oblivion. 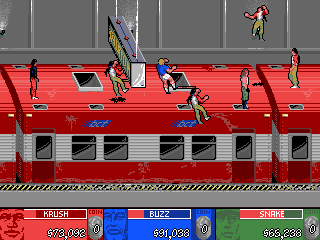 The main problem with Brute Force is that it doesn’t feel rewarding even for a genre synonymous with credit-feeding. Most other beat-em-ups have interesting graphics or mechanics to hold your attention to the end, but this game looks sloppy and plays choppy. Its eight-way directional combat and multitude of weapons are fun to a point, but even they aren’t enough to keep the fun going for much longer than a level or two. There are far better brawlers out there that support three and even four people, like Vendetta by Konami. Vendetta has a similar premise with tough guys using a fair bevy of weapons to clobber ruffians, and it’s far more attractive and fast-paced than Brute Force. Unless you’ll really miss the ability to face in more directions than just left and right, go play Vendetta instead (and its spiritual successor Violent Storm). With a mediocre clunker like Brute Force in Leland’s library, it’s no wonder they were bought and phased out by the Williams Manufacturing Company. While unfortunate, it seemed like a fitting fate for a developer that has sadly lost the spark from their innovative roots in the golden arcade age.

Another look at the game.