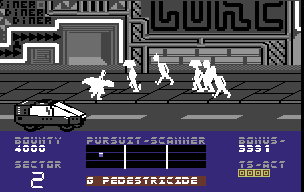 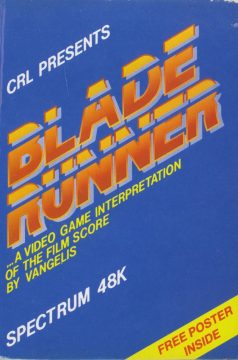 Everyone knows about Westwood Studios’ acclaimed 1997 Blade Runner based off the Ridley Scott flick, but the first Blade Runner game actually was an intriguing tie-in title from budget publisher CRL for the C64, ZX Spectrum, and Amstrad CPC. Rights to the film were too expensive, so CRL scooped up the rights to Vangelis’ legendary soundtrack album to the film. Blade Runner has to be the only video game that states “Video Game Interpretation of the Film Score by Vangelis” on its title screen. Combining elements of maze games and endless runners, Blade Runner is a video game with sloppy controls and a memorable soundtrack that captures the movie’s depressing and rainy milieu. 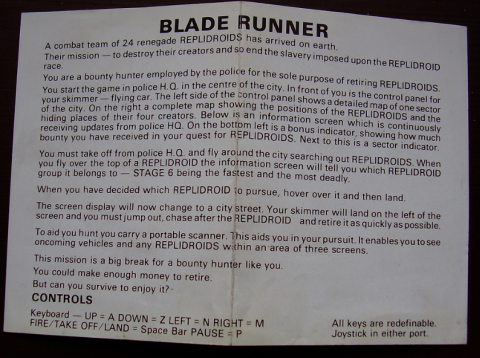 Blade Runner’s brief manual spells out the amusing differences between the game and the movie. Due to rights issues, Replicants become Replidroids. Even more egregious, players do not control a Blade Runner, they control a Bounty Hunter. Other terms from the movie seem fair game. You retire your targets and you fly around the city in your spinner. To win the game you need to destroy a whopping 24 Replidroids; the movie had a trifling 6.

We hear a decent C64 rendition of the pulsing “Blade Runner: End Titles” track from the film as the game starts with an overhead map. Detailed with tight nooks and crannies straight out of the computer consoles of Escape From New York, it’s a bit of a struggle to squeeze through the tight alleyways as you search for the nearest Replicant, er, Replidroid. 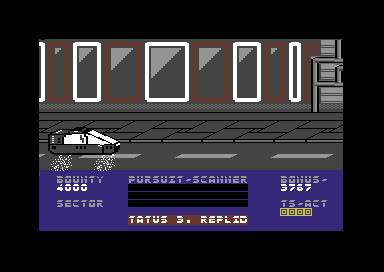 Moving your spinner around the futuristic Los Angeles feels like a claustrophobic Pac-Man. There is a city map you can refer to, but it’s too small to be useful except for the vaguest of notions of where the Replidroids are. The Replidroids move around the map in real time. Often, you can go to a section of the map to catch up with them, only to have them flee from your grasp by the time the new section loads onto the screen.

You try to find the Replidroids (yellow and brown squares) or their creators (white squares) and hover your spinner over them. Finding the creators don’t seem to do anything except for tickling your lore fancy. Once you make your way to a living Replidroid, a readout determines what level of difficulty the Replidroid is (they range in difficulty from 1 to 6). After pressing the joystick button, you move onto the crowded city streets. Inspired by the iconic scene in the film where Deckard chases and guns down the Replicant Zhora outside the strip club, players have to run through the crowded street. Thanks to a portable scanner, you can detect where the Replidroid is within a 3-screen radius.

It is here, the real meat of the gameplay, where things get frustrating. The streets are crammed more than a Tokyo subway at rush hour. You have to either run on the crowded sidewalks navigating between the advancing populace or risk it on the streets full of speeding cars. It’s a choice between hard and harder thanks to the stiff movement. Go too slow, and the Replidroid escapes. Go too fast, and you might bump into a civilian or a car in the street. Catch up to the damned skin-job and you should fire your gun as fast as possible to take it down. The faster you can wipe him or her out, the more bonus bounty cash you receive. Beware, if you miss you might gun down a civilian. Whether your succeed or fail (failing loses a life; you get three), you return to the map screen. 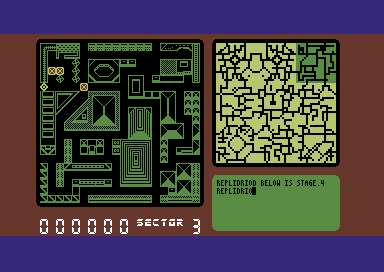 The rest of the gameplay is rinse, wash, repeat for the remaining Replidroid. That’s too bad because the world of Blade Runner could make for an epic game in the arcade action mold this one is gunning for. It’s not all tears in rain, however. Vangelis’ Blade Runner score is well served by the C64’s legendary sound chip, albeit in only one track of music. Both the massive city map and the crowded city streets covered in faded posters communicate the film’s oppressive theme quite well. There’s a core gameplay loop that’s not bad, it’s just tanked by the stodgy controls and sky high difficulty. Even when you’re hunting an easy Level 1 rated Replidroid, catching up and retiring them is a hell of a task.

Believe it or not, ports of this peculiar Blade Runner exist for the ZX Spectrum and the Amstrad CPC. The Speccy has a cooler title screen, but doesn’t feature music during the actual gameplay like in the C64 version, greatly taking away from the meet. Los Angeles’ city streets are awash in reds and blues, giving them a bit more character than on the C64. The Amstrad CPC version has a similar color scheme, but features better music that plays throughout the entire game. C64 is the version to go with, but failing that, go for the Amstrad. 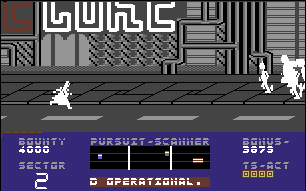 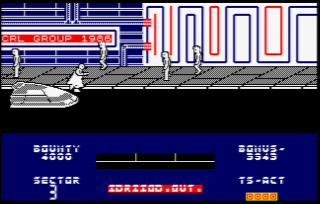 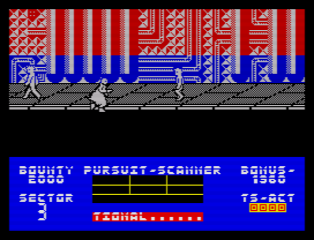