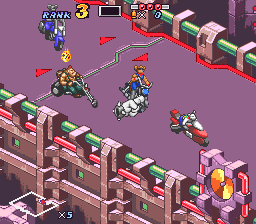 Biker Mice from Mars was one of many cartoons spawned by the massive success of Teenage Mutant Ninja Turtles. For years in the early nineties, television executives attempted to replicate the Turtles’ magic by greenlighting a slew of action-packed series starring anthropomorphic animals. Konami struck oil early on with its Turtles arcade and NES games, and continued to ride the wave with other licenses, including Biker Mice from Mars for the SNES.

The cartoon itself may be the most well-regarded of the Turtles clones. The show stars three Martian mice who ride motorcycles while defending Earth from the same Plutarkians that forced them from their home planet. Three original seasons were produced, plus a one-season revival in 2006. Biker Mice’s writing, like many of its peers, seemed to be influenced by the popular Tiny Toon Adventures – aimed at children, but with plenty of jokes for adults. The voice cast was a real who’s who of nineties television, including future sitcom superstars Brad Garrett and Leah Remini, and no less than six members of the cast of Beverly Hills: 90210.

Biker Mice the video game is an isometric racing game in the style of Rare’s RC Pro-Am. The titular mice ride their motorcycles, while the game’s villains each have their own unique vehicle. The B button accelerates, X brakes, and left and right on the directional pad turns. The Y button fires each character’s unique weapon, which can usually be laid as a trap by holding down while firing. The L and R buttons use their special ability, which is usually some sort of drift that provides a short boost when executed correctly.  Up and down change pitch while in midair, in order to land parallel to the ground and maintain speed. Characters on bikes can pop a wheelie, which allows them to maintain speed through patches of dirt and shallow water. After every lap, each racer is given one of five items that can be used with the A button. There is a nitro boost, a Mario Kart-style invincibility star, a skull that causes an earthquake, a stopwatch that freezes the other racers, and a bag of money to spend on upgrades. 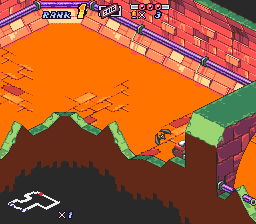 The game progresses through a number of rounds depending on the difficulty setting. Easy Mode includes the first three rounds, Normal goes through five, and Hard grants access to the sixth and final round. Each round has the same progression of five course settings: city, beach, sewer, dirt bike track, and space station. Racers are awarded money and points based on their placement. The player must rank in the top three in points at the end of each round to advance to the next one, or else start over from the beginning of the current round.

The course design, credited to Shinya Ino, gives each setting a distinct feel. City courses, for example, are fairly straightforward, containing few sharp turns and hazards, like a real-life drag race. The dirt bike tracks, on the other hand, are full of ramps and sharp turns to challenge the racers’ control of their vehicles. 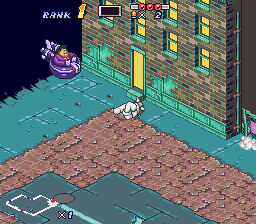 Each of the Biker Mice controls a bit differently. Modo has the highest top speed and his weapon, the Bionic Crash, functions as a mini-nitro boost that helps to make up for his poor acceleration. Vinnie is the slowest, but has the best “grip” stat and can turn on a dime with his Tornado Twirl. Vinnie’s weapon, the Shooting Star, allows him to jump over other racers or road hazards. Throttle is quite average in every aspect, but he is the only mouse whose weapon, the Tornado Shot, can be fired at racers ahead of him. 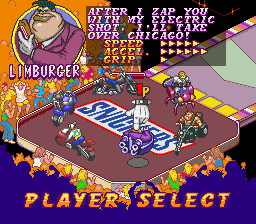 From the PAL version “Brought to you in association with Snickers”

The villains’ vehicles control much differently from the bikes. Grease Pit is similar to Throttle in theory; however, his three-wheeler’s low grip makes drifting into corners inadvisable, as he is likely to drift off course. His high top speed and extremely low acceleration make him better suited to expert players who can navigate the courses without losing too much speed. Limburger’s hovercraft doesn’t make contact with the ground, so road hazards don’t affect him. He also has the unique ability to turn around and fire backwards, instead of just laying traps in the road. Karbunkle is the slowest of the villains, but he has high grip. His Bionic Anchor ability helps to make up for his low top speed by grabbing onto walls and slinging around corners. Karbunkle’s Mutation Beam turns other racers into small, slow-moving mutants, and is probably the most annoying weapon of all. All six racers are well-balanced so that each one is effective for different skill levels and preferences. 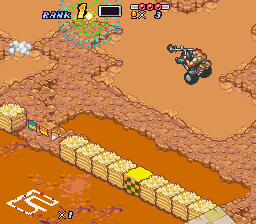 The gameplay of Biker Mice conveys a sense of speed, while generally giving the player enough information to react to turns and hazards. This is largely accomplished by a minimap in the corner of the screen. Glancing at upcoming turns on the map while simultaneously reacting to on-screen hazards may require some practice. On-screen warnings appear as well – in the form of arrows corresponding to upcoming turns, and a targeting reticle that appears when another racer is preparing to fire their weapon. All this information can feel a bit overwhelming at first, but it’s preferable to having to memorize the courses to play them perfectly. Konami’s experience as a developer is evident in their ability to mitigate some of the common frustrations of the isometric perspective on their first try.

The game’s sound design is credited to Keroppi Inoue and Noboyuki Akena, and they put together a fitting atmosphere. The motorcycles roar loudly and satisfyingly, Limburger’s hovercraft emits a futuristic hum, and Karbunkle’s vehicle skitters like an insect. The soundtrack is driving heavy metal that makes the game feel even faster than it already is. Unfortunately, in-game voice-overs aren’t sampled from the show. Even so, it feels good to blast other racers or jump off a ramp and hear an enthusiastic “Wicked!” or “Gotcha!”

The AI is not quite the standard rubber band fare that many racing games employed at the time. Playing as one of the Biker Mice will generally result in the three villains placing higher; while choosing a villain will result in the Biker Mice placing higher, though not in a specific order. This method feels fair, but the AI isn’t always up to the task of providing a consistent challenge. Especially on the latter, more difficult courses, computer-controlled characters can easily get knocked off course and fall far behind. This makes for wildly inconsistent placement from race to race, reducing the number of points required to win a round. 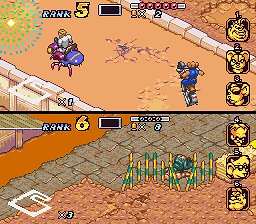 Biker Mice’s multiplayer modes are mostly standard for racing games of the time. Two players can choose to compete in the Main Race against computer controlled characters, or one-on-one on the course of their choosing in Vs. Mode. Battle Mode is an interesting third option that is mostly equivalent to Main Race, but with some key differences. Each racer is given a full complement of weapon upgrades, and once a racer’s armor is depleted they are knocked out of the race for good. The stakes are raised significantly in this mode, which can be both exhilarating and frustrating. All the multiplayer modes are split-screen, which makes avoiding hazards significantly more difficult.

Konami tended to make their licensed games better than they needed to be, and Biker Mice from Mars is no exception. It looks and sounds great, has a premise that fits the show, and – most importantly – it’s really fun. This was programmer Satoshi Kishiwada’s only credit as director, which seems indicative of the experimental era Konami was in. The previous year had seen fellow programmer Toshinori Shimono (credited as Tomcat in this game) direct Teenage Mutant Ninja Turtles: Tournament Fighters – another game that was better than the licensed cash-grab it could have been. Business was booming for Konami, and it seems they may have finally realized around this time that they didn’t need American cartoon licenses to sell their games. It was fun while it lasted, and Biker Mice from Mars is a solid 16-bit racer from one of the era’s very best developers.