Sega’s Aztec Adventure is an unusual game, even for the company. It stars a young boy named Nino, who’s on a quest through the dangerous jungles and mountains of South America to find fantastic treasure. The game is called Nazca ’88 in Japan – never mind that the Nazca and Aztec were totally different tribes in different parts of the continent, though it was likely changed to create an alliterative title. 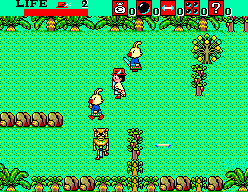 It manifests itself as an overhead action game with some light RPG elements, with the goal being to kill a certain number of boss monsters before you can unlock the temple and reach the next level. Although each stages presents itself as something of a maze, the actual path through each level is almost entirely linear, and there’s no real way to get lost, or miss boss monsters unless you deliberately run past them. There are six types of levels, five of which – Forest, Desert, Wasteland, Marsh, and Underground Temple – have two stages each, before moving onto the eleventh and final stage, which takes place in a strange purple arena, complete with Nazca lines.

By default, Nino carries a short sword, which isn’t terribly useful. It barely has any range, and he swings it at an arc, making it difficult to hit anything, not to mention the issues with perspective causing hit detection problems. However, there are numerous weapons and items to find – for offensive purposes, there are arrows, bullets, and four-way bullets, plus each level type has an item unique to that area. The Forest has flames to burn down trees and other stuff, the Desert has boots which let you walk over rivers without taking any damage, and the Marsh has whirlwinds you can toss about. The Temple has dynamite to blow up walls, and the Wasteland has lightning bolts that turn you temporarily invincible. 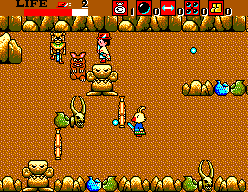 But perhaps the most important are money bags. There are no stores anywhere in Aztec Adventure, but instead, these are used to bribe certain enemy types. By throwing each cash at these guys, they’ll give up their nefarious ways and join Nino, marching alongside and defending them until their inevitable deaths. And they will die a lot, because they’re not all that smart – they don’t really fight enemies so much as bump up against them, quickly taking damage while inflicting it, and they have a tendency to get lost whenever you change screens, unless you’re very careful about how close they are you to. This is one of the game’s best ideas, despite its awkward implementation. It also creates some weird tonal issues – the enemies, anthropomorphic birds, cats and dogs with the names Papi, Pupe and Poh, are featured on the Japanese cover and when you begin the game, and they’re pretty cute! So it’s weird to think that, technically, they’re villains that only become good guys because they’re greedy. Plus, enemies respawn when you leave the screen, which creates an oddity when a newly-turned friend has to face their still-evil clone, which they’ll happily try to murder. 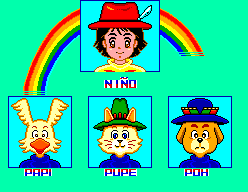 The respawning plays a key part of the game, though, since you’ll need all of the subweapons you can get to do much of anything. There’s actually more depth than one might expect, as each enemy drops the same type of item, as well as being susceptible to specific types of attacks, so you can plan out where and what enemies to farm. Additionally, all of the healing items are hidden, requiring that you explore and hit around the scenery to find them, or at least look at a guide. Aztec Adventure is the type of game that you’ll probably end up dying if you just go charging straight through the levels, with some strategy required to learn each stage correctly.

But even when you have all of the right weapons, and know where all of the healing points are, the combat is just poorly designed. The levels are filled with little flying bombs that fly just out of reach; natives fire arrows that somehow change direction just to follow you. The water bosses in the Marsh areas are the most significant example of this issue – they’ll appear in the water somewhere randomly around the screen, and if you can hit them when they spawn, they’ll dive back underneath and pop up somewhere else. Except in many occasions, they’ll end up somewhere out of reach, sending out a bullet pattern so dense that it’s a matter of chance if you can dodge it. Other boss fights are similar – the patterns aren’t that hard to discern, but carrying them out successfully without taking damage can be almost impossible. 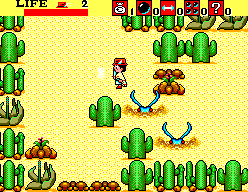 This is all an issue because there are no mid-level checkpoints, and Nino walks quite slowly. Restarting the stage from scratch, including refighting all of the bosses, and slowly trudging back to where you died, quickly becomes tedious. There aren’t any continues either, though at least a hidden level select allows you to skip around the stages.

It’s unfortunate that it’s so difficult, because it’s a really fun looking game otherwise. Many of the sprites are compelling weird, similar to the types found in Alex Kidd and Teddy Boy, especially the bear-like monsters, or the disembodied dragon heads (or whatever they’re supposed to be). The music is catchy, if not incredibly memorable; the game supports the FM addition though the core PSG, despite its chirpiness, sounds a little better.

It also has an amusing ending, where Nino faces off against a living version of one of the Nazca lines. When defeated, the treasure is revealed…which is then revealed to be platitudes about the meaning of being true to yourself. Surely, the real Aztec Adventure was all of the friends we made along the way. (Amusingly, this ending is in English text even in the Japanese version, probably leaving Japanese kids even more baffled and disappointed.)

Aztec Adventure is like many of Sega’s late 80s Master System output, one of those flawed but charming titles that gets by on cute character designs and interesting ideas, rather than the strength of the game itself. But it does have some interesting history behind it – according to SMSPower, the game was planned by Chieko Aoki, the Sega employee that created the RPG design plan that resulted in Phantasy Star, and later became the writer/director of Phantasy Star II. It seems that she left the game industry right after this, which is really unfortunate, considering the strength of her designs.