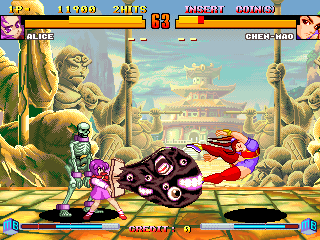 Asura Buster is the sequel to Asura Blade, fixing many of the problems with the first and streamlining the fighting system. The graphics are brighter and crisper, the character roster has been increased substantially, and the bosses are no longer cheap. Asura Buster is in general better than Asura Blade, but is far scarcer due to it being only released in Japan.

The story in completely in Japanese, but involves an insane king that can transform into a powerful behemoth that must be stopped. The rest in unclear and is dependent on which character you choose. The story also introduces Chen Mao, Leon, Sittara, Zinsuke, Rokurouta, and Nanami as playable characters.

Combat has been streamlined immensely. Controls are tightened up and you can no longer use throws or fling your weapon. Additionally, all characters have different sized super bars. Chen Mao has a small super bar, so she can do EX moves and super moves very often. Yashou on the other hand, has a very long one and it takes time for him to fill it up all the way. 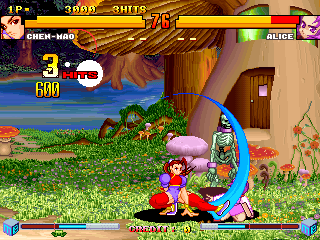 Many of the returning characters play nothing like they did in Asura Blade, with only Yashou, Rose Mary, and Zam-B being mostly the same from one installment to the next. This is mostly due to balance reasons, as Goat was severely overpowered in the first game. Taros was changed for no discernible reason, but is still very fun to play. Alice was changed to reflect that she had learned more magic than necromancy and can now control dinosaur bones and has obtained The Necronomicon. Classic Alice is playable through a code.

Asura Buster also adds a mini game, involving a horde of two-headed dogs which need to be defeated as they charge at you. If you get hit, you only get stunned, which leave an opening for another two headed dog to hit you. This very bizarre mini game was supposed to be in Asura Blade, as the two headed dog sprite was in, but must have been cut at some point. 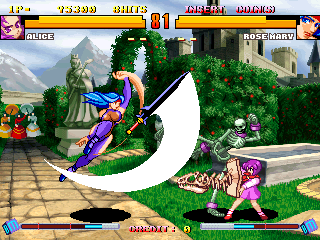 After the Asura series, Fuuki went on to make a puzzle game for the arcade and two adventure games for the Game Boy Advance before going out of business. After that, the Asura series would have faded into obscurity for having no console ports and being barely known, except the MUGEN community seems to have taken a liking to some of the characters, particularly Goat.