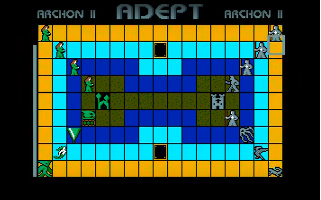 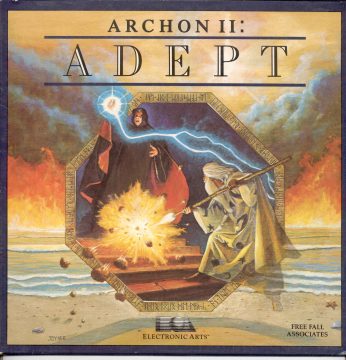 In an era where a lot of publishers, particularly the larger players, tend to be relatively risk-averse, it’s refreshing to look back on a sequel that took big swings and really expanded on the original formula in dramatic fashion. Archon II: Adept resembles the original in a number of ways, of course, but it also completely unhinges the game from its chess moorings and starkly establishes it as a game with its own identity, not reliant on the tabletop roots that so clearly influenced the first game.

Instead of a chess board with armies arrayed along either side, Archon II presents players with a small pool of the titular spellcasters that serve as the anchors for each side’s forces. These adepts, four a side who serve either the Master of Order or the Mistress of Chaos, conjure elementals and demons to serve them but, like the original game’s wizard and sorceress, are also combat units themselves. The game takes place on a rectangular grid of tiles, though each tile’s function is another important way that Archon II differentiates itself from the original. Instead of the simple light/dark polarity of the first game, Archon II’s tiles correspond to one of the four elements. Match a unit’s elemental affinity to a tile of the same type and their combat effectiveness is increased significantly.

Another wrinkle the sequel introduced was the core idea of spell power. Every unit had an associated power drain, and teleporting your adepts across the field or casting spells also cost some of your precious power, which could be restored by capturing power points indicated by pulsing squares on the game board. The game is a careful balance of managing this central resource as being reduced to zero spell power means instant defeat. Casting too many spells and overreaching puts can seriously imperil your prospects if your opponent is able to capitalize on their turn and drive your units off those precious power points. It adds a push and pull to the game that the original lacked with its simple victory conditions (though controlling all of the power squares remains a valid way to achieve victory).

The final end game condition is an interesting one. If either side eliminates all of its opponents adepts, or casts a costly spell called apocalypse, a final battle ensues that decides the outcome of the game. The looming threat of apocalypse adds tension to the game and makes protecting your adepts a priority, beyond their inherent spellcasting ability.

Archon II opens up the strategic possibilities of the original, in large part because it’s no longer beholden to the conventions of tabletop chess. For one, units other than the four adepts aren’t limited in number the way they were in the original game. Instead of a set number of each unit type, players were free to summon as many of each unit as they liked, one per turn, in any order or quantity they chose. Spellcasting was similarly expanded. Instead of a single instance of each spell, which severely limited your tactical options each turn and ensured that you were always aware of what spell capabilities remained in your enemy’s arsenal, spells could be cast any number of times at a rate of one per turn so long as spell power remained. This made for much less predictable turns and made the computer AI much more challenging, as well as opening up a number of different and equally valid approaches in player vs. player contests.

While the shackles were removed in terms of numbers and types of units, the spell power limit was an important check that meant careful planning was rewarded above spamming powerful units. Conjuring units without a clear objective (typically to occupy a power square or eliminate an enemy creature/adept) meant an unnecessary tax on your spell power every turn, which not only limited the other spells and units you at your disposal but also endangered your chances at victory.

For all of its innovations, though, Archon II’s slate of spells cleaves very closely to the original, which is a bit of a disappointment for a game that breaks the original mold in so many other ways. But aside from the inclusion of the apocalypse spell, the magic options available are almost identical to the first Archon. Heal friendly units or weaken your foes, summon minions, or imprison enemy units to stop them from maneuvering across the board. The imprison spell does have a new hook – while locking down an enemy unit does severely limit its effectiveness, it also transfers the spell power cost of its maintenance to you instead of the original summoner. It’s an interesting idea, but paired with the fact that another spell could break an imprisonment as easily as it was cast, it meant that imprison was a rarely used and mostly defanged ability.

The second game did, however, improve a great deal in terms of unit balance between the two sides. Where as in the first Archon the dark side had a significant edge in terms of unit distribution, the sequel feels much more like a level playing field, making choosing and positioning units much more important than which side you’re controlling.

Like the original, Archon II was released for a number of different platforms, though unlike the original it never found a home on the NES. The reliance on more vibrant colors and slightly sharper sprites meant that the Atari 8-bit version suffers even more than the original in comparison to other platforms, though gameplay was nearly identical across versions. The Apple II version suffered in multiplayer unless the special adapter that allowed two joysticks to be connected simultaneously was available, as the keyboard controls were clunky and imprecise and the joystick player had a pronounced advantage. The Apple II also featured a garish swath of bright pink that was a massive eyesore, especially in contrast to the crisp, clean (and slightly more muted) aesthetic of the Amiga version, probably the best version available.

Archon II took tremendous risk and managed to execute on its daring premise with a high level of success. While it didn’t have the impact or the simple purity of the original, which was a revelation when it first released, it did demonstrate that the Archon formula was strong enough to stand on its own legs without needing chess as a crutch to prop itself up, and proved that sequels and innovation are not mutually exclusive.