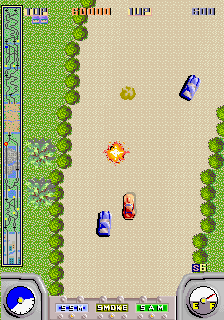 The genre of vehicular combat combines two thrilling virtual pastimes – racing and shooting – into one high-octane asphalt killfest. The most renowned “drive while shooting enemies” game of the eighties was Bally-Midway’s Spy Hunter, but Sega’s Action Fighter served to be a pretty solid entry into the genre, if not a frustrating one.

Spy Hunter gave you a rad car that could fire missiles and oil slicks, and it could even transform into a boat during water-based segments. Action Fighter goes one step further and allows you to control no less than five different vehicles in the course of a full game: A motorbike, a car, a dirt buggy, a helicopter, and a jet ski. This covers just about every stunt vehicle you can think of in your standard James Bond film and each one has their different feel. You’ll mostly be sticking to the bike and car, both of which are similar and can be swapped at appropriate junctions. The bike’s faster and has a smaller hitbox, but the car offers more firepower and controls easier. These vehicles follow the main road of the game’s map, which starts out as a blank bar on the left side of the screen. However, driving through certain barricades unlocks new segments of the map, allowing you to see what’s ahead and determine what junctions you need to take and indicating checkpoints with purple flashing lines. While it’s not made too clear, your eventual goal of the game is to collect every map piece and special point (“M” and “S” icons respectively) by finding each barricade on the game’s infinitely-looping road. This unlocks the enemy base (indicated by a red dot) whose core you simply shoot once to win. However, dogging you throughout your journey are lots of enemy cars and helicopters, not to mention the terrain itself which has a lot of curves, pits, rocks, and other obstacles for you to avoid. Furthermore, you have a fuel gauge which depletes if you drive too far without changing vehicles. 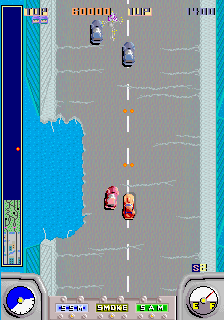 As you find portions of the map, you may notice yellow dots that signify other vehicle-changing areas. Most of these allow you to take over the helicopter and engage in segments which feel more like conventional shmups. You don’t have to worry about colliding with obstacles here, but the amount of enemies is even higher and ground turrets cannot be hit if you don’t power up first. One of the change stations even switches you over to the jet ski, which essentially functions like the bike on water. These segments warp you across the map and can get you to roads not otherwise accessible, with a rather rocky fly above a canyon leading you to the ending base. There’s also one segment of the map entirely designated for the dirt buggy, which downplays enemies in favor of incredibly hazardous terrain. You can make enemies less of a problem if you grab power-ups dropped down by helicopters, enabling up to three different abilities that your vehicles can perform. For example, the helicopter can actually destroy land turrets, and the buggy gains the awesome jump ability making its segment less painful.

That being said, you can expect much pain in Action Fighter, which would be more enjoyable if it wasn’t so face-squishingly brutal. Arcade games are quarter-eaters by nature, but AF hogs down your credits like a gas-guzzling 24-wheeler on diesel. The main problem is that if you go too fast, it can be tricky to dodge what’s coming ahead. This is a greater hazard on some segments than others, particularly the desert buggy parts which are laden with obstacles and pitfalls. The natural response to this would be to slow down, right? Well, if you slow down too much, it makes it easier for enemies to hit you and you run a greater risk of not finishing your current segment with any remaining fuel. It’s not uncommon to instantly lose another life merely a few seconds after respawning from your previous death. It can be an ordeal-and-a-half if you intend to reach the game’s actual end, but even getting a high score is enough of a feat in itself. 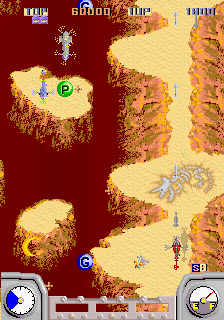 So Action Fighter runs on a neat premise, but its difficulty can be a put-off. Still, if you have lots of quarters to spare (or a working keyboard), then Action Fighter‘s worth a run. It’s not Sega’s best, most notable, or even most original title, but it’s still an enjoyable high-speed romp that’s recommended for anyone who likes cars with their guns, like peanut butter with chocolate. As alike many of Sega’s arcade hits, Action Fighter received a port to the Sega Master System. However, it’s less of a port and almost an entirely new game with vague ties to the arcade game, not unlike Bionic Commando on the NES as opposed to its arcade original. Instead of having a large interconnected map like its parent, the SMS version plays out more like a conventional shooter with five stages, each of which can be broken down into a “road” and “air” phase. You start out with the bike in the road segments, and while you can dodge opposing cars, you can also ram into them if you approach them from the side and can even run them off the road. You must collect six letters which fly in from “A” to “F”, and once you grab “D”, your bike upgrades to the car. Getting all six parts will soon have you end the stage and transform your car into a jet, beginning the air phase. You must survive this segment until you get to the boss, and should you destroy it, you move on to the next level under the same rules with tougher maps and enemies. Dying doesn’t outright take a life, but you instead have a timer counting down from 999, and every death wastes more time. If you die after the timer runs out, you are given a scant quantity of lives as your last chance, and the game concludes if those run out.

The console rendition of Action Fighter is quite an enjoyable game on its own merits, but it feels more like a conventional shooter than its original source. That’s not necessarily a bad thing, as it makes the console version worth a play separate from the arcade, making neither version necessarily inferior to one another. Action Fighternaturally received various ports to all the major computers of the time, but in an unlikely move, the rest of these ports are modeled on the SMS version instead of the arcade one. Aesthetically, the best among these would be the Amiga and Atari ST ports, both of which are functionally identical to each other. There’s not much to say about most of the other ports, as the MS-DOS version looks as you’d expect it to in CGA (though it thankfully has an EGA option), the C64 one runs smoothly even if it’s a graphical step down from the Amiga, and the ZX Spectrum version is actually quite competent despite being a mostly white monochrome. However, the Amstrad CPC version is an utter disaster, with the graphics appearing incredibly shrunken and pixelated, and the actual flow of the game somehow being sluggish and choppy. It’s somewhat baffling how it turned out like that when the CPC’s specs are roughly comparable to the C64, but you can’t go wrong with any of the other renditions. 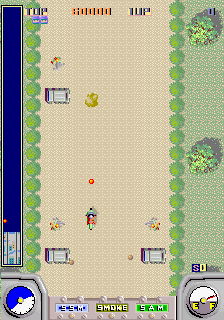 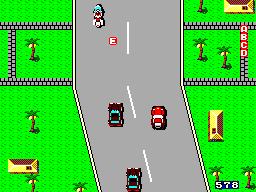 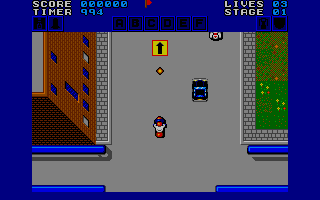 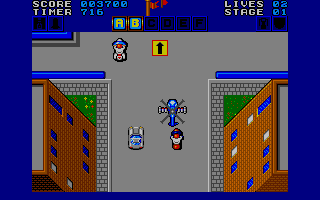 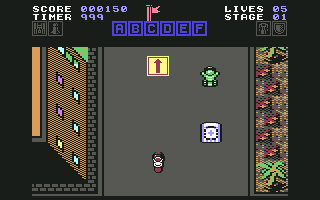 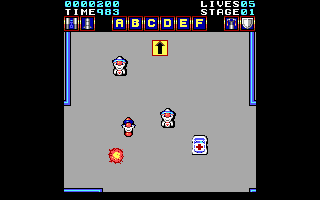 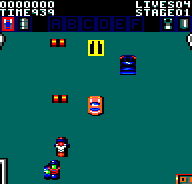 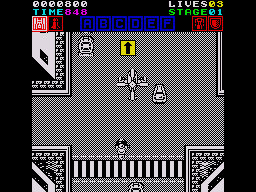