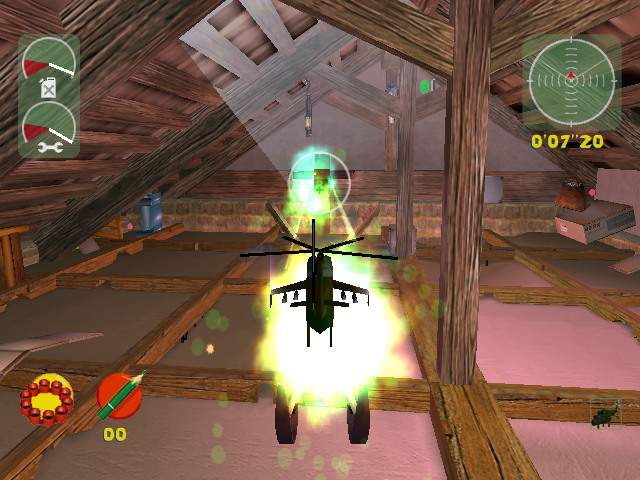 Video games and toys are both objects of play, but the kind of play they facilitate often couldn’t be more different. While games usually enforce or reward a way of playing determined by the developers, toys merely suggest it through their design. Video games are really specialized at providing one kind of experience, but toys leave the development of an experience up to the player and their imagination. The possibilities are infinite, as they say. So what if someone decided to take the concept and aesthetic of playing with toys, but placed it all within the rigid framework of a linear, mission-based game?

Small French developer No Cliché’s only major release, Toy Commander, does just that and is actually pretty highly regarded among Dreamcast fans for having done so. Playing as Andy (Guthy in the European version), a child in the house which makes up the game world, the player is given control over a regiment of toy planes, helicopters and tanks, each armed an upgradable set of machine guns, missiles (pencils), bombs (erasers), and landmines (tacks). A group of Andy’s neglected older toys has banded together under Huggy Bear, a teddy bear packing some considerable firepower, to exact their revenge on his new toys. There are several missions to complete in each room, each one tasking the player with reversing the invasions, kidnappings, arson, and general mayhem which Huggy Bear’s comrades have inflicted. 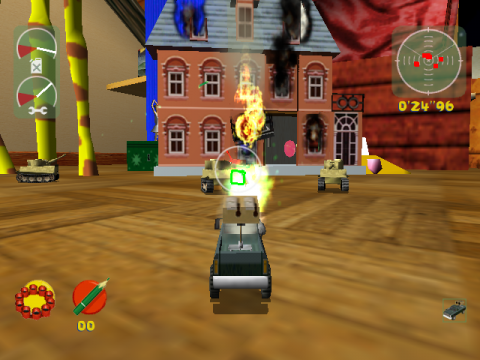 The game is divided into seven main rooms, plus one final boss room and one secret room. Each room has six missions to complete, each with a time limit enforced by the room’s boss. Simply completing enough of a room’s missions at your own pace will unlock the next room, but only completing several missions under the time limit will unlock the room’s boss battle. Eventually, you’ll fight Huggy Bear with an army of all of the bosses you’ve defeated, so there’s incentive to defeat as many bosses as possible to stand more of a chance against him.

The game’s boss battles aren’t particularly impressive, although they do generally evolve through multiple stages. The bosses have several layers of armor, which they shed upon taking a certain amount of damage, and with every piece they shed, they switch attacks and weak points, usually becoming more mobile. But the battles are very quick – only a few take more than 10 seconds, once you find the right angle from which you can hit every stage’s weak point with a minor aim adjustment. 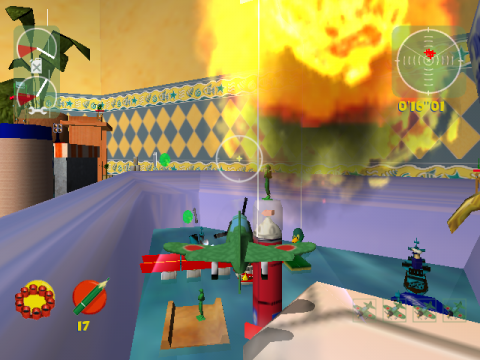 The variety of the missions is one of the game’s most appealing parts. The standard military scenarios of infiltrating bases, rescuing hostages, and escorting supply convoys are all present, but they are complemented by plenty of scenarios that make full use of the toys and domestic environments. One mission in the Hallway, “Emergency 9-1-1,” involves rescuing firemen from military installations and jails, bringing them to their fire engine and fire-fighting plane, escorting them to the sink to fill their tanks, and helping them rescue a stuffed penguin from atop a burning building. Another mission, “Insectophobia,” involves exterminating a trail of cockroaches, then flying a helicopter through the house’s plumbing to exterminate the insect queen. Missions with less at stake include “Little Big Taxi”, which is essentially a toy version of Crazy Taxi – you must transport a male doll across a highway to the train station so he can meet his girlfriend.

To see the world from a miniature perspective is pretty cool already – insignificant details serve as insurmountable obstacles, and small openings between objects hold spaces hidden from human perspective. But beyond the physically small perspective, the world is definitely that of a child’s imagination, as the environments feel appropriately improvised and mashed up. One late-game mission, “Extraterrestrials Gone Bad,” begins outside a fort made of trash cans, and within the fort is an ominous tunnel with a coffee packet at the end serving as a Mega Man style boss gate. Inside is a sort of alien mothership miniboss, built from a knight’s torso atop a UFO. Much in the way that children wouldn’t limit themselves to one set of toys, but mix and match everything at their disposal to approximate their creative vision, so do Toy Commander‘s developers imbue their environments with a sense of having been thrown together from what was available. But this often creates really messy environments, like “Labyrinth”, a maze in the Hallway bounded by walls made of every conceivable household object. Without meaningful landmarks, it’s very easy to get lost in a sea of random objects. 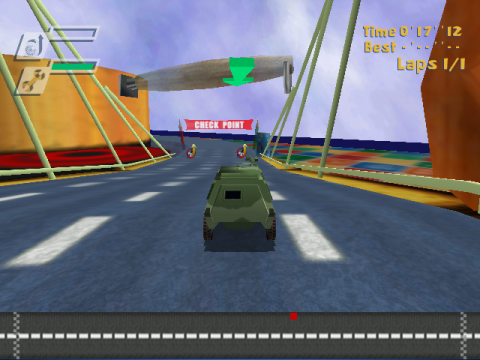 The levels also evolve across the sequence of missions, with the aid of these environmental improvisations. The first stage, the Kitchen and Dining Room, begins with innocent culinary missions: finding a chocolate bar and boiling two eggs. Another mission is a friendly plane race across the dining room. But in the room’s later missions, the environment grows more and more threatening and militarized: in “Deep Sea Trap” it is submerged and filled with submarines, and in “Blow the Bridge Down” the darkened dining room table holds a fortress guarded by tanks and turrets. There’s a growing sense of danger in these progressions, but also the sense of Andy attempting more and more elaborate transformations of his house’s playing field.

Controlling the vehicles can be wonky, like in many early 3D games. Ground vehicles’ turning is oversensitive, which leads to a lot of frustrating falls off of ramps which might as well be tightropes. Planes have the opposite problem, so a lot of the successful air-combat strategies involve nuzzling the plane up against whatever part of the enemy doesn’t have a gun, then firing the rest of its missiles. Helicopters give a great degree of control and can stop on a dime, but it’s difficult to hit anything accurately while moving, due to their pitch and yaw. As a result, a lot of the game’s difficulty comes ultimately from wrestling with the delicate controls.

Toy Commander is one of the better-looking games for the Dreamcast. You occasionally get a little too close to a low-resolution texture, but for the most part, the world is colorful and detailed. The art style is also consistent, so the mashed-up level environments still look unified, nothing seeming especially out of place. The sound is somewhat less appealing. The explosions and gunfire are fairly satisfying, but prepare to hear the same randomly-pitch-shifted missile sounds a whole lot during combat. The music is a fairly unobtrusive mix of elevator techno and unquestionably European dance tracks. 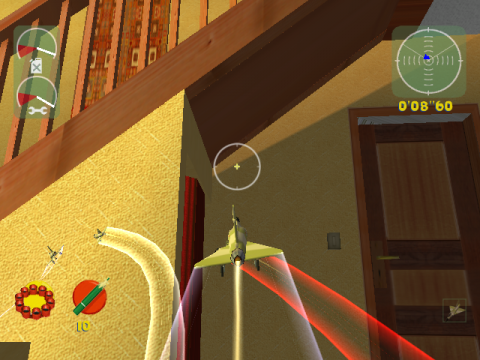 Overall, Toy Commander is a pretty fun game derived from a pretty strange concept that hasn’t been explored much since. Most games that have explored the idea of toys have done so through the idea of unstructured play – simulation and sandbox games, for example, as well as more experimental and more literally toy-like games. These games explicitly recall the experience of being a child, exploring the uses of some object of play, and setting one’s own goals. Toy Commander, on the other hand, creates the experience of being a child by explicitly casting the player as a child, and asking them to create the same sorts of tasks a child would in the course of playing with toys. Pretty artificial, right? It’s still fun, but it succeeds despite, not because of its concept.

Many mission sets were released for Toy Commander through the demo discs included with issues of Official Dreamcast Magazine. Most noteworthy are two holiday-themed missions called Toy Commander: Christmas Surprise and Toy Commander: Summer Special. Christmas Surprise is definitely one of the more entertaining missions designed for the game, so it’s unfortunate that it was saved for this equivalent of DLC, and is now quite difficult to track down online. Among several other toys, in this mission Andy commands a toy Santa with a jet-pack, collecting presents from around the Hallway and Mezzanine to deliver them under the Christmas tree. Upon completing the mission, the player is greeted with a holiday message from No Cliché.