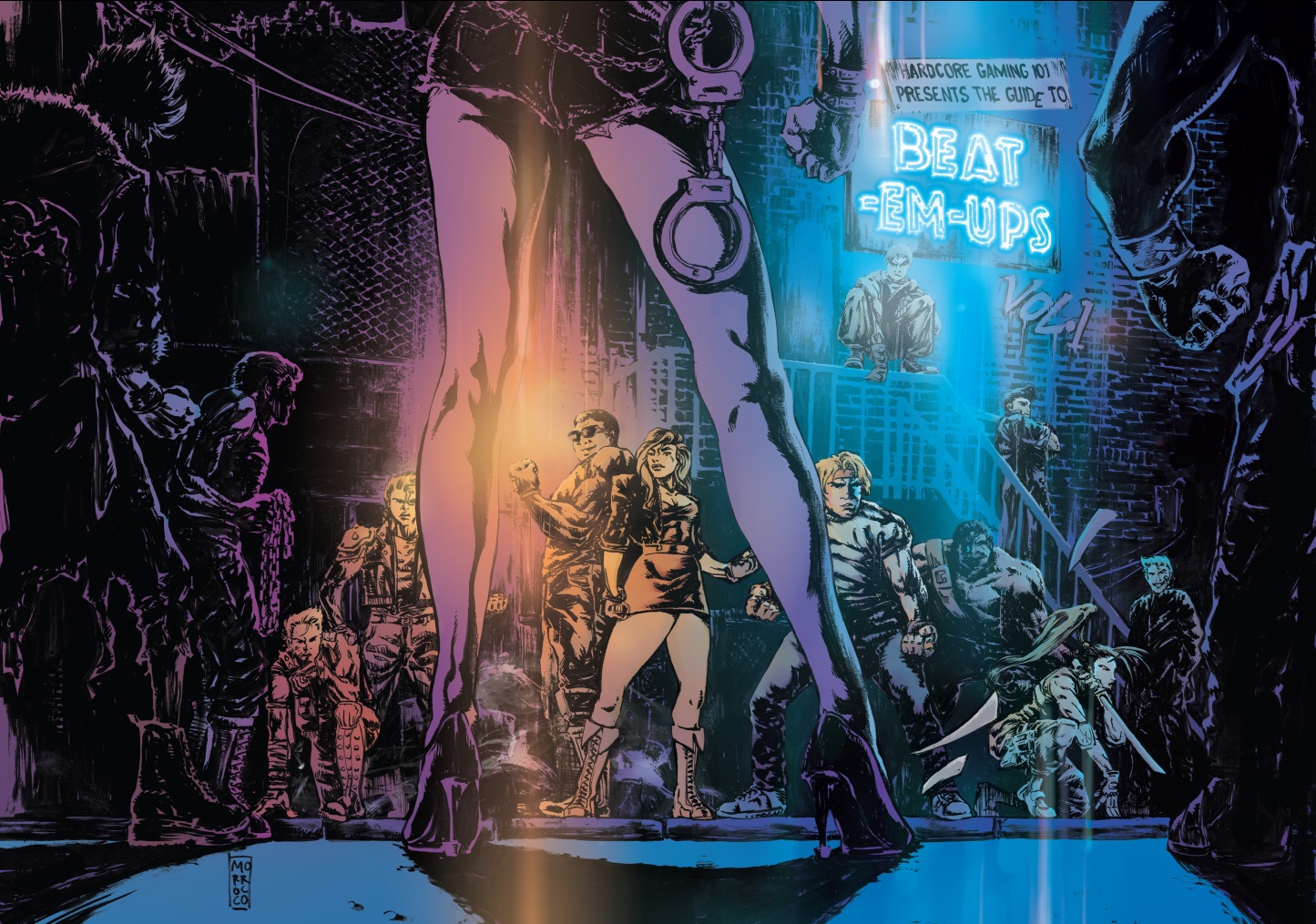 It’s been about a week or so, but the HG101 Guide to Beat-Em-Ups Volume 1 is now available at Amazon, including on the international sites. Please check it out! As of this writing, the American Amazon site has given a 10% discount on the paperbacks, which they usually do in the first few weeks of a book’s launch. I don’t have any control over it, though, and I’m not sure when it ends, so this is probably the cheapest time to grab a copy!

This is the first HG101 book to have two covers, one by regular cover guy Rusty Shackles, which includes an amusing faux diner menu on the back, and another by Mike Morrocco, who’s done some of the Patreon-exclusive postcard artwork and provided an extremely cool cover by the style of Streets of Fire, the cult classic film whose spirit is tied with quite a bit of 80s video games and anime. There’s no business reason behind this other than me just liking to hire artists and fund some cool looking illustrations. If you buy one book, then the other book’s artwork is shown on one of the back interior pages. Other than that, outside of the ISBN info, the interior contents are identical. 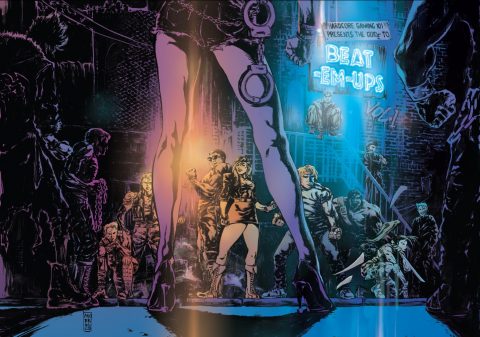 This book probably would’ve been out a few years ago, except for one major holdup: Technos’ Kunio-kun series. We had an article on the games back on the old site, but it was written over a decade ago, and the series has seen a big resurgence since then, both in the form of several 3DS games and Western games like River City Ransom Underground and River City Girls. Not only did the old ones need to be rewritten from scratch (and include some things that were previously missing like the European computer Renegade spinoffs), but also needed to cover all of those extra games. Between these many games and complicated lore, much of which is only addressed in Japanese, it was quite an undertaking! 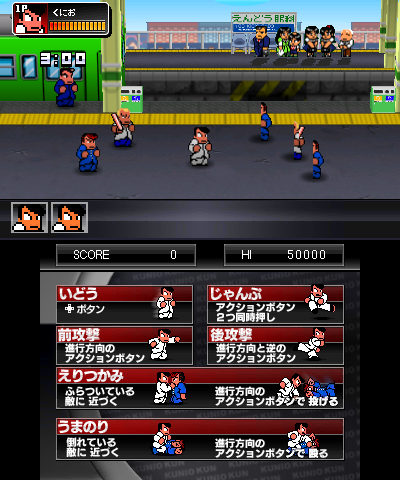 Japanese-only, digital-only 3DS games, one of the bane’s of my existence

A major issue is that some of the 3DS ones were Japan-only. I have a modded American 3DS system that I use for screenshots, but region locking is an issue for the system, so importing was out of the question. Plus one of them (Riki Densetsu) is digital-only, which created further roadblocks – it would cost hundreds of dollars to get the hardware just to play these, much less get decent quality screens. Thankfully, within the past couple of years, emulation has caught up for 3DS games, so it made covering these games possible. It’s still pretty glitchy, so the screens we included for the book were carefully taken to hide them. These were also mixed with some of the screens from the American Kunio games (Tokyo Rumble and Rival Showdown) captured from my console, but there doesn’t seem to be a difference in quality.

The Kunio games were an essential part of this volume because it’s the origin of the belt-scrolling beat-em-up genre. Then its American counterpart, Renegade, eventually inspired the creation of Double Dragon, which at least in North America, was much more popular. Covering these foundational works from Technos (and related games from other licensees) took over 60 of pages – about 40% of the entire book! The first Double Dragon itself is covered over a dozen pages, considering all of the majorly different ports. Also included were a couple of other related titles – Shadow Force, an excellent (and sadly obscure) arcade beat-em-up from Technos, as well as Silent Dragon, another (deservedly unknown) title from the developers of the arcade Double Dragon 3. 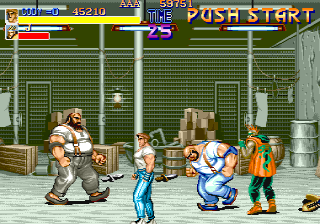 For print, we also corrected the aspect ratio for the otherwise extremely wide CPS1 384×224 screenshots

The next game profile was Final Fight, and all of the works by Capcom. Final Fight obviously isn’t the first beat-em-up but it did set down the formula that was copied by dozens of other games over the next decade. Final Fight was also one of the earliest articles on HG101 and has been updated, edited, and rewritten several times by this point, with another revision created for this book. (Completely separate from this, I was also on an episode of Retronauts a few months back to talk Final Fight, as well as an episode on the 8-bit Kunio games, though I think that may be Patreon-only.) Along with this are all of the many other Capcom games, including Captain Commando, Aliens vs. Predator, both Dungeons & Dragons games, and everything else. These were highlighted recently in the Capcom Beat ‘Em Up Bundle (a nice collection which is still incomplete due to licensing issues).

Next up are all of the Konami games. Most of these are licensed games, which were extremely popular in the United States, like the Teenage Mutant Ninja Turtles games, X-Men, The Simpsons, and a few others. These include lesser known non-licensed games like Crime Fighters and Vendetta, both of which were recently revived for Arcade Archives releases. This will hopefully pave the way forward for games like Metamorphic Force and Violent Storm, the latter of which is so beloved among HG101 staff that we nominated it for our 200 Best Games of All Time book from back in 2015. 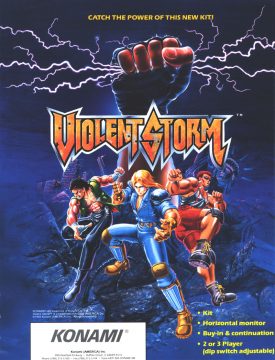 We finished up the book with Sega’s Streets of Rage series, which unlike the others, didn’t originate in the arcades, but has been long beloved in the console space. The fourth entry was released just last year, and enough time has passed that we can comfortably say it’s one of the best of its kind.

There were some other plans that we had to scrap since the allotted space was already taken up by all of the above. While Kunio-kun/Renegade may have started the belt-scrolling beat-em-up, the genre as a whole technically started with Irem’s Kung Fu Master, which also had a few other follow-ups like Vigilante, plus a few other Irem games like Undercover Cops. We also intended to include the two Denjin Makai games, since the second one in particular is also one of the best of the era, but again, we just ran out of space.

Of course, there is a second volume planned, which will include Kung Fu Master, the other Irem stuff, and Denjin Makai. It’s also scheduled to include many other arcade and console games from other companies like Jaleco (Rushing Beat), Seibu (Zero Team), International Games System (Knights of Valour), and others. Like many retro-styled games, the genre has also seen a resurgence among the indie games space, beginning with Castle Crashers and Scott Pilgrim vs. The World, and continuing up to newer games like The TakeOver and Fight n’ Rage. One of the major pieces that wasn’t included in the first volume was Golden Axe, since it was already included in Sega Arcade Classics Vol. 1, but we’ll be rewriting it for the inclusion in the second volume, and will also include a selection of other beat-em-ups in featured in other books (Taito’s Ninja Baseball Bat Man, Sega’s Arabian Fight, Data East’s Night Slashers, and so forth).

It’s unlikely that there will be enough content to a third volume, so we’ll be squeezing as much as possible in the second volume. There’s no set release date for this, as its priority will be determined on sales of the first volume, but hopefully it will be sometime in 2022. There are a few other projects that we’re hoping to have out before the end of the year, including another Nintendo-themed digest (Metroid / Kid Icarus / Punch-Out) and a follow-up to the Retro Indie game book, as well as another Sega-themed book planned for next year. As usual, our plates are filled with these and other projects, so please look forward to them!