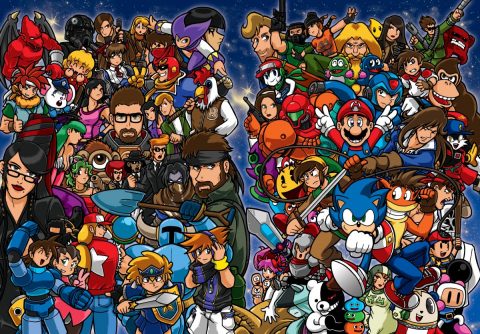 Also available on all other Amazon Europe sites for retail price of 31 euros.

Every website or magazine has their own “Best Video Games of All Times” list – here is ours! From early arcade classics to 3D action games, from text adventures to interactive cinema, this book includes 200 of the best video games ever released, covering over three decades of gaming history, created by developers all over the world. Each entry highlights why our picks are the best examples of their genre, and includes additional recommendations for similar games. Both rookie and veteran gamers will definitely discover some new and interesting games to check out after finishing this book.

Nowadays “top X” articles on the internet tend to be seen as clickbait, hastily assembled list determined by some quick democratic polling of staff. Plus, the lists tend to be rather insular, usually based on whatever publication or forum assembled them. Rock Paper Shotgun, for example, has top 25/50 lists for many genres, but focuses only on games released on the PC. So reading about “best horror” games seems really strange when you’re omitting huge swathes of them, especially Japanese developed games. Similarly, computer RPGs and Japanese RPGs have such different fanbases that they’re almost entirely different genres, so there’s rarely any crossover on “best RPG” lists. IGN and other mainstream sites tend to focus on newer releases at the expense of gaming’s history. The goal with our book is to give a broad overview of many different types of games across the medium’s history. So even if you may not specifically be into, for example, 4X strategy games, you might be interested in reading about a few of them, and maybe giving them a shot.

From a writing standpoint, we wanted to features pieces that would be longer than a hastily written blurb like many other lists. So, each piece for each game is about 450 words. (It also helped enforce the quality of our choices – if we couldn’t devote 450 words of praise to it, then it probably wasn’t worth including.) These are not comprehensive reviews, so they’re written differently than the style you’d normally see on HG101, focusing primarily on what it does and why it excels. There are 216 pages altogether.

Additionally, since we wanted to include a broad selection of titles, we didn’t want to list too many similar games. So, to accompany each selection, there’s a “see also” sidebar of another game that’s related in some way – either being part of the same series, from the same developer, or sharing some thematic link – that’s also worth checking out. However, sometimes we still feature multiple games in the same series in the Top 200 list if there’s enough different to talk about them. For example, it seemed redundant to feature both Super Mario Bros. 3 and Super Mario World, since they’re both fairly similar, but we gave a separate spot to Yoshi’s Island, since there’s enough that stands out to make it worth that distinction. But this “see also” spot is also used to highlight why we picked one entry over another, while still relating that both are excellent.

Building the list was not particularly democratic. Basically, a bunch of us staff members started by listing our own personal favorite games and used that as a starting point. Then, we mapped out which genres we wanted to cover and how many entries to allocate to each. Additionally, each entry was chosen specifically to represent something. For late 90s/early 00s first person shooters, we chose Jedi Knight and No One Lives Forever, since those were the best representative of that era. Other lists select games based on historical importance, or its quality at the time of release, but we wanted this to be a list of games that were still worth playing today. The list we initially assembled had some gaps – for example, none of us had selected any real time strategy games – so we reached out to many of our other contributors to round out the list, as well.

Obviously there’s some level of bias when it came to determining how many slots we gave to each genre – we definitely prefer 2D fighters/platformers over 3D fighters/platformers, for example – but there’s still a wide variety of topics featured. The only type of game that’s not represented at all are multiplayer-only games, like first person shooters, MMORPGs or MOBAs. The main reason is that I personally don’t play any of these games and can’t write about them with any authority, nor do I know enough about them to make educated selections. Plus, it’s hard to write about the multiplayer aspects of older games, especially if they no longer have an active online community.

The list has an emphasis on cult classic versus mainstream hits, and a slight focus more on retro games than modern ones, though it’s not like we intentionally ignored big names, as there are still many picks that show up on many other similar lists. In some ways it does feel like a small waste of space to highlight Super Mario Bros. 3 when everyone on the planet \is in agreement in how excellent it is, but at the same time we hope the written piece is interesting enough that makes reading it worthwhile.

In addition to the main Top 200 list and each “see also” entry, we also added 50 runners-up, each with brief blurbs. These were entries that were originally part of the Top 200 but got knocked off for whatever reason, or titles that the staff enjoyed on a personal level but were difficult to broadly recommend.Altogether that makes over 450 games covered within this book.

Additionally, unlike other lists, the titles in this book are not ranked, outside of the “see also” and “runner up” entries. It just doesn’t make any sense – is Final Fantasy VI better than Half-Life 2? It’s totally arbitrary, and is like comparing apples to baseballs.