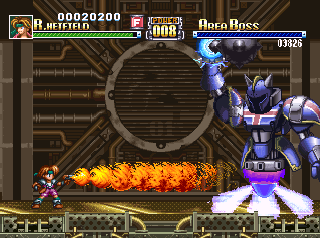 Rapid Reload, also known in native Japan as Gunner’s Heaven, is very, very obviously influenced by Treasure’s Genesis run-and-gun Gunstar Heroes. It was developed by Media.Vision, a company that worked closely with Sony and later went on to create the Wild Arms series of RPGs. At the time, Treasure wasn’t known for creating sequels, so the developer must’ve felt they needed to take it into their own hands. It was an early release for the PlayStation, and got passed over by the general public in favor of the flashier 3D games. It never hit America at all, as Sony was never too down with the whole 2D thing, especially early in the system’s life.

For the outset, it’s still easy to see why this game didn’t garner any attention, as neither the graphics nor sound are anything to write home about. There is a little bit of voice acting, but there’s nary an anime cutscene or flashy intro in sight. The presentation is definitely lacking – other than the slightly more detailed graphics due to the increased color palette, the game practically looks like a SNES title. Still, all of the action would probably have caused Nintendo’s megahertz-challenged system to choke. 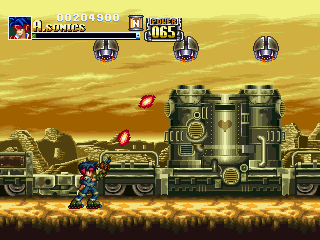 The game puts you in the shoes of Axel Sonics (the dude) and Ruka Hetfield (the lady), Wackily Named Commandos At Large. They’re fighting against a rival treasure hunting team called the Pumpkin Heads, in their search for a treasure called Valkiry.

Despite the usual tradition of games like these, Gunner’s Heaven is only single player, so your Contra-buddy will have to sit this one out. The object is, of course, to run to the right (and occasionally up) and shoot pretty much everything in sight. Many of the elements Gunstar Heroes appear here: wacky boss characters, huge multi-segmented machinations, and the ability to toss enemies and hang on handlebars – even the animation is astoundingly reminiscent. Quite welcomed is the ability to stand in one place as you aim while holding down the L2 trigger. You also get a grappling hook for reaching high places, although it’s sadly underutilized.

Unlike the usual deal where selectable characters play exactly the same, Axel and Ruka actually have their own completely unique weaponry set – Normal, Homing, Grand (multi-shot), and Fire – making a total of eight weapons altogether. While many of these weapons will seem familiar to Gunstar Heroes vets, the system is entirely different. You can cycle between any of these weapons at any time. The biggest difference is how the weapons work – there’s a timer on the screen that’s constantly counting down, as timers often do. As long as it’s above zero, your gun will be charged; however, when it hits the bottom, your weapon loses strength. Certain enemies drop power-up crystals that increase the timer a few seconds, keeping you moving forward and shooting as much as possible. 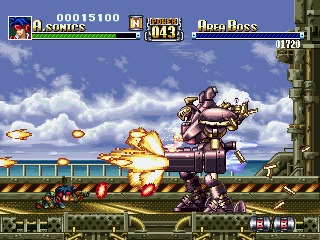 Unfortunately, the weaponry system isn’t all that well implemented, or even thought out. The point of having a timer count down was so you would attempt to destroy as much as possible in the least amount of time, so you’d still have power left when you reached the boss (where the timer stops.) But the distribution of power-ups is very unbalanced – sometimes you’ll get tons of them at once, other times you’ll come across huge stretches where there’s nothing. At times the game teases you with an item that will fully charge you gun to maximum level, allowing you to really rip loose with them, but the charge only lasts very briefly. Why the designers would make a game designed around destruction and then limit you is somewhat baffling. Even at their lowest levels, they’re not useless – certainly much better than, say, the hapless pea shooter in the NES Contra games – but they are significantly weak enough that it will make boss battles drag on. Still, as long as you keep yourself charged, the game will provide a reasonably challenge without being too maddeningly difficult, as there are a few checkpoints found throughout the stages.

There are six levels total, with two levels deviating from the norm: one being a mine-chase on some kind of ultra-roller skate, the other being a trip through the skies on a jetpack, both (not to beat the bush) similar to Gunstar Heroes. Most levels are also have at least three bosses that need to be crushed, most of which are somewhat inspired with the occasional bit of wackiness – the robot with a chassis of a Union Jack flag wielding a laser flail is by far the best.

The core action mimics Treasure’s forebear pretty well – the weapons are fun, things explode very nicely, and the levels are constantly throwing new challenges at you. The music is pleasant if not exactly memorable – there are two arrangements you can pick from, for some reason. Still, it can’t help but feel like Rapid Reload falls short of its potential. Part of this is because it’s perfectly content to just mimic another title rather than try anything new and interesting, but it’s more than just that. Gunstar Heroes was a technical masterpiece for the Genesis but there’s nothing that pushes the barrier here – it wouldn’t be until later titles like Klonoa or Strider 2 where 2D titles really utilized the power of the PlayStation. Plus, the character design is simply generic mid-90s anime compared to Han’s uniquely stylizied artwork. Coupled with the goofy weapon system and absence of a two-player mode, and it feels the game from attaining classic status. Still, quality 2D titles were like an oasis in the desert during this period, at least until SNK ramped up production of Metal Slug titles, so the end result is still a pretty fun game. 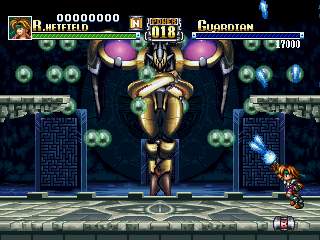