Data East’s Midnight Resistance is something of a spiritual successor to Heavy Barrel. It reuses the same rotating joystick to fire in practically any direction, except the overhead perspective has been changed to a sidescrolling one, making it more like Contra than Ikari Warriors. When combined with the ability to jump, this gimmick becomes a bit more awkward when used in this setting. The pacing isn’t quite as fast as Contra, although the stages are fairly well-designed. It has a particular thing for sliding out bits of scenery – in the mountain level, for example, the rocks in the background move to one side to reveal something more dangerous behind it. 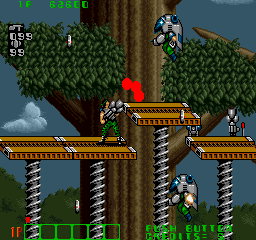 You still get keys from downed enemies, but here they work slightly differently. Instead of finding locked boxes throughout the stage, the keys act as currency in between levels to unlock various weapons, which are held in cases. Again, there’s a spread launcher and a rather cool flamethrower, in addition to a machine gun and a shotgun (which is really more of a rocket launcher, if anything.) You can also get more powerful grenades called Nitro – activated by pressing Up and Fire – and a barrier satellite which circles around your character. Your ammunition is technically limited, but you get so much of it – 500 rounds when you pick it up, an extra 500 if you spring for the bonus pack – that it’s usually more than enough to last you to the next checkpoint. When you get hit, you drop all of your keys and your weapon, but they can be easily recovered when you get back up.

Despite the clumsiness of the control scheme, Midnight Resistance is still enjoyable. Throughout the game, you get to take down buzz saw machines, fighter jet squadrons, and battleships. It also gets positively weird by the finale. While most of the game is grounded in reality – at least, the kind of reality you’d see in 80s action flicks – it starts going bonkers by the time you have to rescue your family. Your grandfather, apparently, is a scientist who has been kidnapped to work on a diabolical super weapon. When you find your relatives, they’re locked in the same containers that you usually find weapons in – hopefully you have some keys to get them out, otherwise you’ll get a worse ending! The last stage takes place in outer space, where you’re assaulted by hundreds of square images of the evil leader, before actually fighting him. He is, in fact, a ridiculously ugly gigantic head, which copiously vomits brains. 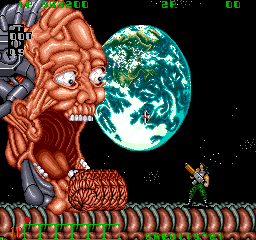 Midnight Resistance was ported to numerous platforms, the most well-known being the Genesis version, done by Opera House. It’s certainly the best-looking of the bunch, relatively speaking – the arcade game wasn’t exactly a graphical tour de force, either – but the lower color palette means the backgrounds take a huge hit. In the first stage of the arcade version, there’s a cityscape with skyscrapers in the background. In the Genesis port, it’s quite dark.

Like Heavy Barrel, the rotating joystick mechanic couldn’t quite be translated to consoles, so this port offers two options. There is no way to fire your gun manually – instead, you simply press A to turn auto-fire on or off. Holding B lets you lock your fire in a specific direction. On the other setting, pressing B will rotate your aiming clockwise or counter-clockwise, depending on the sub-setting you chose on the option menu. This is extremely difficult to use effectively, and is not advisable. The default setting works well enough, though it can still occasionally cause confusion, and it would’ve been nice if the developers had simple added a regular Contra-style control scheme. It also makes it far too easy to accidentally use the grenades, since this is done by pressing Up when you’re firing. What if you were trying to aim upwards? While the game itself is slightly easier, losing all your lives sends you back to the last checkpoint instead of instantly respawning. You can choose up to five lives, with five continues. The two-player mode, is, sadly, completely gone. The real highlight of this port is the excellent soundtrack, converted by Hitoshi Sakimoto. It takes the rather plain arcade music and makes it much more powerful. 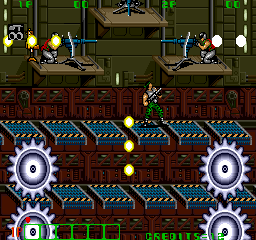 Aside from the Genesis release, the Amiga and Commodore 64 ports are both fairly decent. The action is somewhat slower, and no attempt was made to translate the control scheme, so now it more or less plays like Contra. The graphics on the Amiga version are a decent rendition of the arcade original’s visuals, too, despite losing the multi-plane scrolling, but some areas are more detailed than the Genesis port. The Amiga version also keeps the two-player mode. The Commodore 64 version is hard to control due to the lack of a jump button which, in tandem with aiming your gun, can prove somewhat troublesome. The music in both of these ports is excellent. 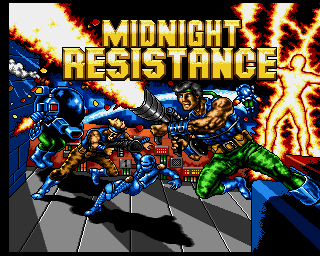 The Atari ST version looks like the Amiga port at first glance, but it loses the smooth scrolling, instead inching forward a few squares when you walk past a certain part of the screen. The Amstrad version is just a port of the Spectrum version, although the graphics have been re-colored. Like the Atari ST version, they scroll one screen at a time, and the action is slow and choppy. 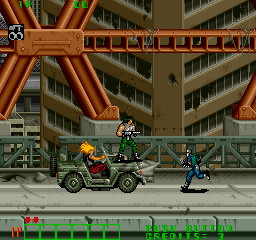 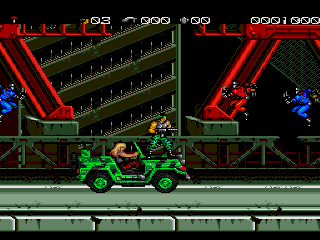 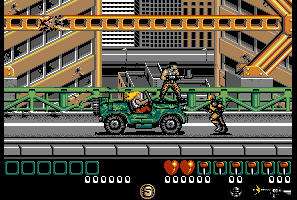 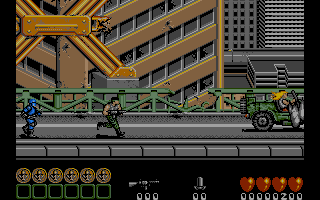 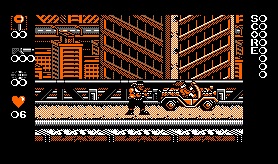 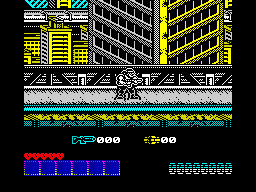 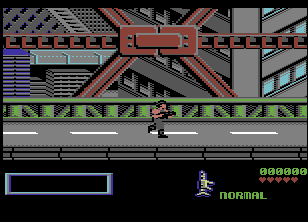