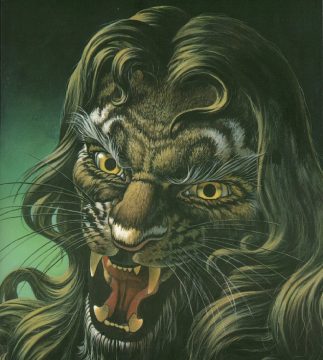 The German development house Thalion remains fairly well remembered for its Amberstar / Ambermoon RPG duo, but the fact that they also made one of the best action platformers for the Amiga has been largely forgotten by now, and what a shame it is. Released in 1993 exclusively for Commodore’s 16-bit miracle machine, Lionheart may have been a bit late to garner truly big international recognition, but it still earned raving reviews from the Amiga specialized press. With no rating below the equivalent of 8/10, it was celebrated as the system’s greatest action game ever (yes, it was often declared better than Turrican) and its big console killer. But Lionheart is also linked to a sad tale: Thalion explicitly used the game as a test if the piracy-ridden Amiga market could still sustain ambitious action games. Apparently it couldn’t, because Lionheart was Thalion’s last contribution to the genre. The company eventually closed doors in 1994. 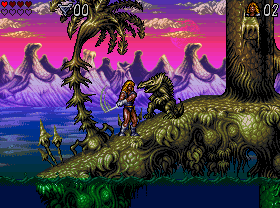 One couldn’t tell from his typical barbarian sprite, but the hideous cat face on the cover actually belongs to the game’s protagonist Valdyn, who is sent out by the king of cat people to slay the evil wizard Norka to retrieve the symbol of his power, the Lionheart. But Valdyn also has personal beef with the soulless warlock: While stealing the artifact, Norka turned his wife Ilene to stone. But before you write off the game now, be pleased to hear that the rest of the game is more unique than its plot. 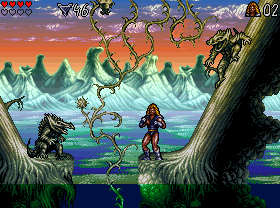 Valdyn embarks on his journey on the back of a red dragon, but the beast is soon captured by Norka’s airship, and the hero has to go on by foot. His quest leads him through a swamp, a castle and a volcano, before he catches up with the airship to get back his dragon and ride him to Norka’s hideout. For the majority of the game, Valdyn’s only weapon is his surprisingly short sword, but he has got a few tricks up his sleeves. By holding the action button and pressing in either direction, Valdyn can execute several different moves: Pressing backwards makes him swirl around to attack enemies behind him, while forward and up are simply sword slashes with varying height. Pressing down makes him kick on the ground, one of only two means to attack enemies below his waist level. The other one is to extend the sword downwards while plunging down on the enemy from above, similar to Rastan, but here it allows the protagonist to bump back up in the air like Super Mario. 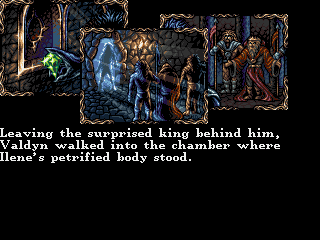 The intro and ending sequences are told in small panels accompanied by text.

Valdyn’s springiness is remarkable, but in cases where it’s still not enough, he can also hold onto certain ledges, shimmy along or climb up onto them. There are also ropes and slopes to slide down, but then he cannot get back up the way he came, so they should be approached with care, lest he misses many of the secret areas and items. Most of them are just small Thalion logos, but gathered in a bunch of one hundred, they permanently extend Valdyn’s life meter. Health potions are in generous supply around Norka’s realm, extra lives, on the other hand, get a bit rare. And if you look around real carefully, you might even find some of the sword upgrades, which not only change the color of the slashing effect, but also make it much more powerful – although unfortunately they never extend the weapon’s range. 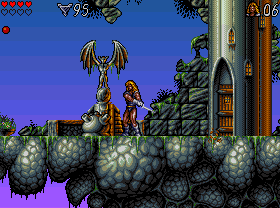 The areas are never as labyrinthine as Turrican‘s more free-form stages, though. There are rarely more than two larger branches, and it isn’t long before one ends in a dead end or the two paths merge again. Lionheart is just as much influenced by the console tradition. Other than most European home computer platforming games, stages are more akin to a series of fixed challenges rather than huge worlds to get lost in. 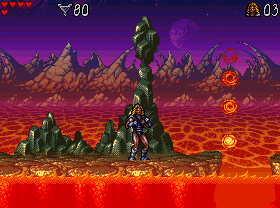 And the challenges are just as imaginative as in the next Konami or Capcom game: Most of it is made up by different kinds of platforms, but here the developers went through great pains to make them all fit in with the surroundings: Big leaves give in a bit when jumping on them, and moving platforms are actually large bugs crawling through the background vines. There are demons coming out of the ground whose long tongues can be used as temporary platforms, and in the volcano Valdyn can punch around rocks to use them as stepping stones over the lava sea. There even is some semblance of a physics system in place: When running downhill, Valdyn gains speed and can then jump much further than normally. Later in the game appear pendular platforms, where you have to press down on the joystick along with their downward movement to gain momentum. 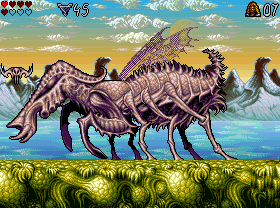 These giant ant-spider-things can only be hurt when they open their face armor.

Enemy types may not be quite as abundant as in contemporary console highlights, but Thalion made every sprite count. In the regular platforming stages there is really only one kind that qualifies as fodder enemies, while everyone else is a cunning bastard. Even the lowly demons that first appear to be crawling around the floor waiting for their certain death suddenly start jumping at your face when they get the chance. Nearly every creature has some kind of swift surprise attack or a means to defend itself against Valdyn’s blows. Some clichés are served, like the goblins that appear in windows to throw down rocks, but most enemies are truly original and feature a unique visual design. 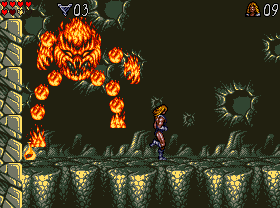 Bosses are impressive, but in some way also a bit disappointing. First and foremost, there are only four of them (although the last one sends two of his higher minions into battle beforehand). The few that are there are massive and cool, but their number really leaves something to be desired. It also seems as if the artists already blow their best ammunition with the very first one, a screen-filling moth that Valdyn has to climb in order to hit its weak spot, Shadow of the Colossus style. The second is a fire spirit with segmented limbs, which would feel right at home in a Treasure game. The mechanical dragon in the flying stage looks better than he fights, though. 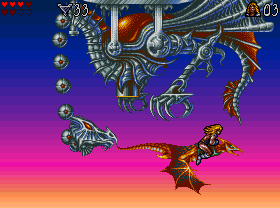 The ride on the dragon is overall the weakest part of the game. It’s a side-scrolling shoot-em-up stage, but the dragon keeps spitting fireballs on his own, and Valdyn can only influence their direction a bit. He can still slash at the enemies with his sword if they come too close, though. Unfortunately, the enemies here are all not very engaging, and it simply drags on for much, much too long. A bit before that comes a ride on a dinosaur, which is a bit better but still not the most engaging segment. 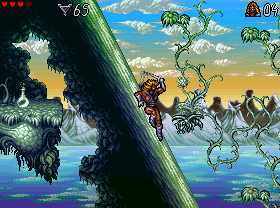 Valdyn has to keep defending himself even while sliding down a slope.

Yes, Lionheart does have a few more weaknesses, most notably with the controls. For a home computer game they are super precise and responsive, but the one button rule poses a problem, as usual. Lionheart even supports two-button joysticks or gamepads, which reassigns the jump from moving the joystick up to the second button, but the rest of the controls still don’t take full advantage of that. Having to keep the attack button pressed in combination with the directions is counter-intuitive, especially since a single press is enough during jumps and while hanging onto a ledge. The timing for the downward plunge attack is also a bit clunky. 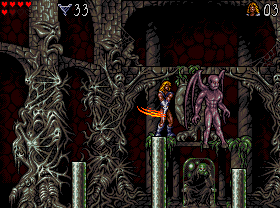 Finally, the stage length seems somewhat imbalanced. The first world still consists of five areas, but then every subsequent world gets subsequently shorter and shorter. Lionheart is still fairly long for an arcade style action game, but the structure make the adventure feel shorter than it actually is. Back in the day the lack of a save or password system was also annoying, but fortunately that point becomes moot when using an emulator. 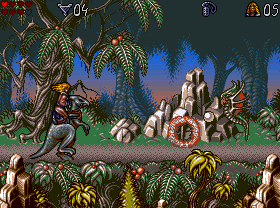 Even after completion, there’s still plenty left to do with Lionheart: The default mode is already hard, but still in a moderate sense, so the game offers two harder difficulty levels. But other than in most games, “Hard” mode doesn’t just buff up the enemies. Many of the stages are significantly expanded here, resulting in an even longer game than before. And then the secret level still waits to be found, whose completion is mandatory to free Ilene and see the god ending. 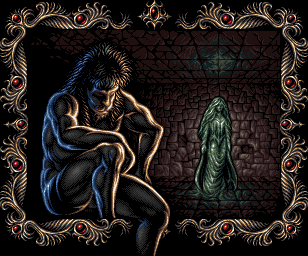 Can he save her?

Even if Lionheart wasn’t the formidable action game that it is, the gorgeous graphics alone would be enough to justify its existence. Thalion was in the fortunate position to employ the Netherlander Henk Nieborg, one of the most talented European pixel artists during the 16-bit era. The amount of detail in every object is simply stunning, both in still images and in animations, even if Valdyn runs like a doofus. But Lionheart is also impressive from a technological standpoint: Programmer Erwin Kloibhofer used a lot of programming tricks to increase the amount of colors on screen (especially the first world feels trippy with the organic color transitions in the environment as Valdyn makes his way up the trees), and he even managed to make the Amiga simulate some Mode 7 style rotation and zoom effects, and the amount of parallax scrolling layers is almost impossible to count. The only effect that looks hideous on modern monitors is the interlacing for color gradients, but fortunately that can be switched off. 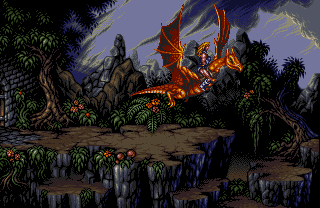 All that technical prowess came at a price, though, and that price is even more of a problem today than it was twenty years ago: The game had some noticeable slowdown with ordinary Amiga 500 or 600 computers, requiring a 1200 to run at full speed. Because of all the specific techniques used, emulators do have a hard time properly running the game, so that slowdown hunts players even today in WinUAE. It is possible to get the game running at full speed in FS-UAE, but the settings required to achieve that aren’t always obvious. 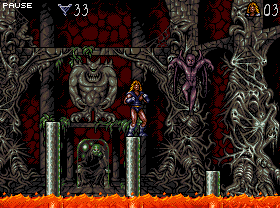 A very ardent fan from France has programmed several versions of a Windows remake since 2007, but they all don’t run very well – if at all – in Windows Vista and beyond. It’s a shame, because they do have interesting features. Lionheart Remake Evolved expands the game using additional graphics provided by Henk Nieborg. Lionheart Remake Enhanced (the only version that ran during testing, but crashed every time at the end of the first area) on the other hand strived to be an exact copy of the original, with the exception of comfort options like higher resolutions and transparencies in place of interlacing effects. A level editor is also included with some versions, although it is not very user-friendly. The same author has started another remake in Java, which would promise better compatibility, but unfortunately it’s been lingering around in the same unfinished state for years. 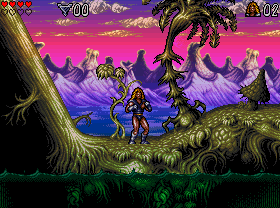 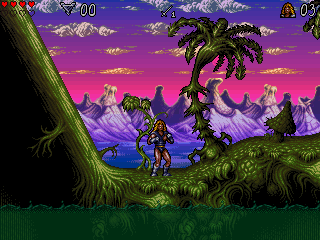