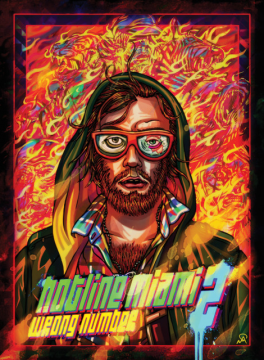 Hotline Miami was such an explosive hit that propelled Cactus and Dennis Wedin to an unprecedented height of fame. While a long-time game maker, Cactus wanted to start putting extensive effort into games and profit from them, so he teamed up with Dennis and the result was phenomenal. The combination of intense action and psychedelic ultraviolence turned out to be a winner, despite the nature of said violence intending to make some people feel bad about their actions. It would only make sense for there to be a sequel, though Dennaton only intended to make downloadable content missions to the first. The effort they put into the DLC eventually snowballed into a full-fledged sequel, officially christened Hotline Miami 2: Wrong Number. Considering its humble start, many would expect Hotline Miami 2 to be basically “the same but more,” and it’s made just enough changes to strike a distinctive impression that feels like more than a mere rehash. 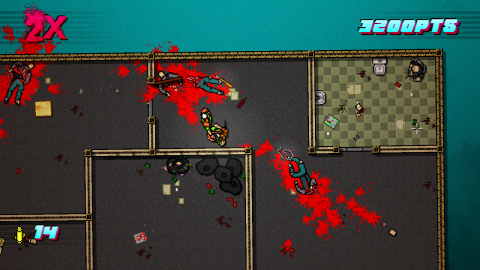 There is a much bigger emphasis on plot this time and it provides some context for the first Hotline Miami‘s story. Taking place yet again in the grisly and colorful Miami, most of it is set in 1991, two years after the Mafia-slaying exploits of “Jacket,” the unofficial nickname of the first game’s player character. The narrative is non-linear and bounces between multiple protagonists, and there can’t be said to be really any one main character.

There’s the deranged actor Martin Brown, the Jacket-inspired copycat killers called “The Fans,” renegade detective Manny Pardo, zealous patriot Jake, humble journalist Evan Wright, and some others who can’t be identified due to spoilers. The narrative is still bizarre but does a good job at accounting for the first game’s existence without feeling like a desperate retcon, and it actually manages to provide surprising moments of pathos. But you really came here for the violence, right? If you did, Dennaton will probably make you feel like more of a jerk than last time, but at least the controls are familiar. 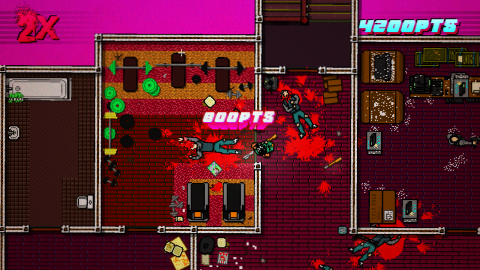 The basic rules have not changed: Kill every enemy on each floor while trying desperately to not die yourself. Both melee weapons and firearms are available and you’ll have to adeptly use both at times, though there is a much larger emphasis on gunplay before. A few missions even stipulate you choose a specific gun that you need to pick up ammo for to reload. Some other missions start with selections to determine play style, most notable those with The Fans. They offer abilities not present in the first like dodge rolling and dual wielding, but some levels give you no specialties.

It feels like choice is limited compared to the twenty-some masks the first game offered, but the price seems necessary to boost character development instead of playing as one character who’s just a blank slate. You even have a few characters who aren’t bloodthirsty murderers, with Evan being the most notable standout. He doesn’t want to kill anyone and can only knock enemies out with blunt weapons unless he overkills two opponents on the floor, but you’re more likely to get a higher score by staying calm. His levels are designed to be manageable with only melee as a contrast to the aforementioned larger levels that require you to be extremely aware of your surroundings. 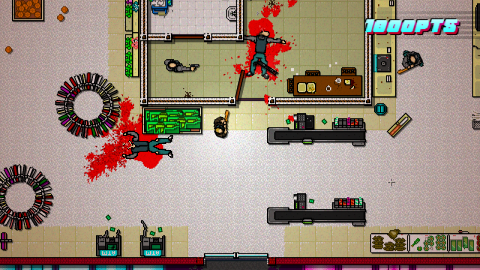 Hotline Miami 2 has twenty-six stages, several more than the first, and they have bolder designs and more individual atmospheres. There are the usual warehouses and crackdens, but a few military bases (in Hawaii) and others like docks. But more importantly is how much different it feels due to the higher level difficulty. The game assumes that you’ve already beaten the first game (if not mastered it) and while there is a difficulty curve, it starts high and just continues through the roof.

The main reason for this is the level design, which consists of many, many large open spaces, windows, and other aspects which make you far more vulnerable to enemy fire. Many areas more or less require that you use the “look ahead” button, or else you’ll be shot from offscreen before you can even react. Restricting the character selection and abilities for each mission communicates to the player: yes, there are specific ways to beat this level, figure it out. It marks a stark contract to the more freeform approach of the first game, and is the primary reason why this sequel has a far more divisive reaction among fans. 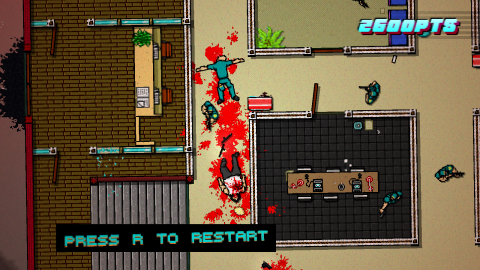 One of the best strategies is just to think of it like any retro video game, to understand its meta elements in order to get the upper hand on the level’s enemies. his, of course, leads to some logical inconsistencies – only certain enemies react to a bullet sound, for example, so why do some baddies not react while others rush towards you? The obvious answer is: because that particular enemy was set not to react to sound. The original was the same way but this game’s difficulty level requires realizing these things and gaming the system if you want to get anywhere.

The soundtrack is once again amazing, perhaps even better, as while the first game had some stages repeat tracks, every level has its own individual tune (though there is recurring cutscene music), and it makes each stage stand out further apart from each other. Musicians like Perturbator and M|O|O|N provide more excellent tracks, but there’s even more contributors this time around, including Mitch Murder, Magic Sword, Mega Drive, and the incredible Carpenter Brut. Combined with the first game’s soundtrack, the Hotline Miami music is basically a gateway to the world of synthwave. 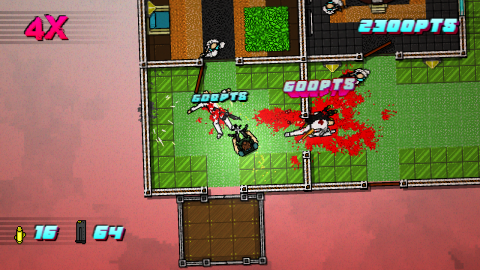 The game is actually darker than the original, if that were possible. A really early scene drew controversy for depicting rape, but a menu option can remove this scene for those who would be offended. The ending has proven controversial for reasons you’d best find out for yourself, but it does make some degree of sense for it to end the way it did, or at least for whatever “sense” is worth in Hotline Miami.

The greater individuality of protagonists, the larger scope of the levels and their more open level designs, and the heavier plot build help to keep it separate from the first, even though it still is good old Hotline Miami at its core. Some will prefer the lean focus of the first while others will favor the second’s increased content and restrictive strategizing. A third installment would feel long in the tooth without more drastic changes, but Dennaton is adamant that Hotline Miami 2 is the absolute end of the series. If the end comes, the least you can do is face it with dignity and accept that a good thing isn’t going to get any better. Hotline Miami: Horrible, depraved, and sublime. You are sound itself, and you are flight.