At a time when Captain Planet blared on the airwaves, it was not uncommon for children’s cartoons to proffer the virtues of environmental activism. Meanwhile, games generally remained silent on the subject. Or they did, until 1993’s Great Greed was released by Namco for the Nintendo Game Boy. In Great Greed, you take the role of a mute protagonist that gets spirited away into an alternate dimension while on a camping trip. You quickly learn that Bio-Haz, the game’s antagonist, is polluting the kingdom of Greene in his pursuit for world domination. Your character is guided from location to location on various fetch quests, destroying toxin spewing factories along the way and rescuing towns from pollution and chaos at the hands of Bio-Haz.

Gameplay is typical for a Game Boy JRPG, with the player going around a large overworld visiting towns and fighting monsters. But the game strays from the mold when it comes to its turn-based combat. Each monster from the game’s surprisingly robust (and for some reason, food themed) bestiary is taken 1-on-1, and the maneuvering through menus during combat is ditched in lieu of mapping everything to a button. A attacks, B dodges, and at any time four magic spells bought from shops or found in dungeons can be equipped and mapped to the d-pad. Although it does speed up the pace of battle considerably, the fights quickly devolve into the player spamming A to attack, stopping occasionally just to heal. The biggest drawback is that the instructions for magic spells are sorely lacking in this menu-less combat. While no big deal for some of the obvious offensive spells like flame or freeze, there are more than a couple of spells that will never be used simply because the name is too vague and the game gives no explanation. The rescued princesses join along, though they only provide assorted buffs and other benefits rather than participating directly.

Throughout the game, you travel between absurd scenarios orchestrated by Bio-Haz. Such situations include towns where the violently enforced laws are determined by a giant roulette wheel, or an election where the politicians have been infiltrated by monsters in disguise. By the end of the game, you reach towns where toxic clouds force people to hide indoors, and litter pollutes the streets. As one would imagine due to technical limitations, all the dungeons feel pretty similar, but the game still tries its best to make each setting memorable. Early on you infiltrate an abandoned record factory with giant spinning records to disorient you. Later, you eat an ultrahot flower that is so spicy it causes you to sprint and outrun a poisonous fog. These wacky events bring variety to what would otherwise be endless corridors of caves and forests.

For all its faults, Great Greed does a few things that are surprisingly ahead of its time. A handy auto-save system saves your progress every few minutes, taking a bit of the fear out of sudden game overs. But perhaps more surprisingly, the game has one of the earliest instances of gay representation in the medium. Once you beat the game, you have the choice of marrying one of the five princesses of the Kingdom of Greene, but by talking to the male NPCs repeatedly, the king allows the protagonist to have a husband (or even marry the king himself!) While admittedly very minor, and potentially meant only as a joke, it is still a somewhat wholesome addition at a time when even Harvest Moon wouldn’t show same-sex marriage.

Upon defeating Bio-Haz, who then waxes poetic about the importance of taking care of the earth, you pick your wife (or husband) and the credits roll. The enemy designs and silly scenarios are the game’s high points. While it is admirable that Great Greed would try to do something different with its battle system, the idea is sadly squandered. Any joy from the battles arises from the the interesting sprite-work, and not the gameplay itself. Great Greed  seems to be one of those forgotten Game Boy RPGs, with hardly any buzz at its time of release, or anybody left that fondly remembers it. While unlikely to ever see the light of day again, the environmentalist premise is sadly just as relevant today as it was 30 years ago, if not moreso. 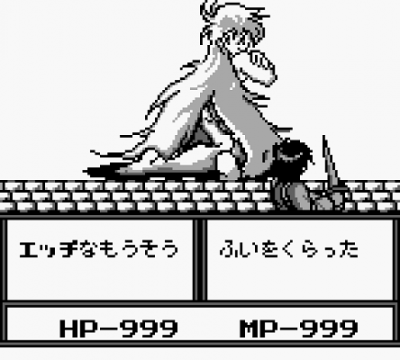