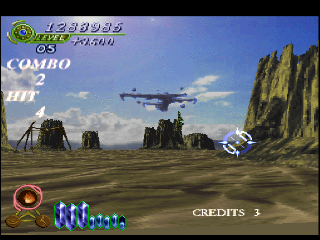 Although it may not look it today, Alfa Systems’ light-gun shooter Elemental Gearbolt had some considerable heft when it was originally released. There were big names attached to this project: animation was handled by Madhouse, direction was done by Rintaro, and character/enemy designs were left to Hitoshi Yoneda (known for his work on games like Silent Bomber and Mystic Ark). It’s also worth considering that the game was part of the light gun shooter genre, as it was that genre’s sensibilities that informed the game’s own direction. Games like Time Crisis and Virtua Cop (among many others) still held relevance as demonstrations of what technology at the time was capable of. Elemental Gearbolt more or less follows those.

Where it deviates is the typical pool of blockbuster action movies these games often drew inspiration from. Where its peers looked to those movies to create tense, action-packed scenarios for the player to navigate, Elemental Gearbolt’s mood is more somber and contemplative, like something out of a fantasy novel. Or at least that’s the intention. It presents itself as more sophisticated, especially due to the fact that the English version was published by Working Designs, a company more well known for its RPGs than its shoot-em-ups. At least, it suggested something deeper than an arcade game.

The basic workings of the average light gun shooter remain unchanged: you maneuver a reticule across the screen, shooting at enemies before they get the drop on you (signalled by shrinking boxes around an enemy ready to attack you) and at special items before the opportunity passes. Any modifications the game makes to this basic framework are minor. For example, in lieu of weapons you need to reload or whose ammunition can be exhausted, you instead get three weapons you cycle through depending on the circumstances: a fire-based shotgun, a water-based spread gun, and more limited lightning-based spread gun.

There’s also a combo system, which is, in theory, very simple: chain together hits without missing and your combo counter goes up. The higher your combo counter, the higher your score and the more experience you have at your disposal should you choose to level up (it’s a sort of trade off between scores and levels). In practice, however, the system is very stressful for two reasons. First, this is an unforgiving system that demands nothing short of perfection from its players. Even one mistake is too costly to ever recover from. Second, because of a variety of factors – many things to track on screen, little time in which to track it (much less move your cursor where it needs to be), a perspective that’s constantly in motion – maintaining a combo across many enemies proves difficult, even with the warnings the game gives you. This is even more pronounced during boss fights, when the amount of enemies/projectiles to track is increased and the pressure for a perfect performance is even greater than it was before.

Your only defense against this barrage is the leveling system. Granted, you’re not required to level up to complete the game, but given the invaluable health upgrades a level up gives and how stressful the game is already, foregoing levels is the surest way to death. (They may also provide improvements to your weapons’ strength and functionality, but neither improvement is apparent during play.) At the same time, leveling makes play feel even more futile by encouraging you to chase after a perfection you can never attain. Because experience and score are tied together, it’s theoretically within your control how strong you can become. Yet the truth is that incredibly high standards keep most of that strength out of the hands of almost any player. The maximum level is 16, but most playthroughs only go up to 7; not even half the potential strength. Even a perfect TAS, playing at the highest difficulty, hitting every possible target and sacrificing experience altogether to get the highest score possible, doesn’t reach the required score to hit the level ceiling.

The scoring and leveling system is only part of what Elemental Gearbolt does to set itself apart – the other half is the setting. In the framework of its story, the game confidently adorns itself in all the imagery of a typical fantasy story. That much is clear in the game’s narrative premise (told exclusively through cinematics). The plot opens to knights celebrating their victory against a rebel uprising by parading members of that rebellion through the city streets. Yet the power of those knights is quickly undermined. Below the surface, a sentient weapon system has come to regret its inability to create a peaceful world. It then succumbs to despair and unleashes magical havoc on the world. The rest of the story focuses on the prince of this kingdom as he tries to mitigate the damage. Gearbolt is the kind of game that’s teeming with high-minded fantasy motifs – it’s a world of magic, where fairies and ogres live alongside humans and unrest brews in a militaristic empire (not to mention a small dose of melodrama).

These magical elements never connote whimsy or fairy tale-esque joy. Quite the opposite; the game is characterized by its strong lamentful tone. While Prince Bel Cain is technically the protagonist, the players actually take the roles of two sisters, Nell and Serena, who were members of the rebellion that were executed and revived solely to be used as weapons. They are, essentially, flying undead cyborgs, powered by “Spirit Circuits” and wielding “Holy Guns”. Its world is caught in the violent death throes of a corrupt empire, yet the weight of that empire’s collapse falls hardest on the people out in the streets. Theirs is a situation in a constant state of decay. Levels either feel tightly packed and chaotic, or wide open to emphasize emptiness and ruin. These latter environments may draw comparisons to Panzer Dragoon, but that comparison falls short. Sure, both worlds are in a similar state of ruin, but Panzer Dragoon’s vision is post-apocalyptic. It believes that people can still find their own value living in this destruction, and it holds out hope for the world’s eventual redemption.

Elemental Gearbolt, on the other hand, is apocalyptic. It has no hope for the kingdom’s redemption. The forces that have led to its destruction have been in play for too long to be acted against, and the game is ultimately skeptical about the possibility of creating anything from this tragedy. The closest it does come to finding value is in mourning this inevitable tragedy. It’s a motif that’s echoed throughout so much of the game’s design, the story being the most obvious place. The prince himself realizes that his kingdom is on the brink of ruin, and, judging by his level of disgust when forced to deal with his corrupt father, he has no interest in restoring the kingdom to its former glory. Despite this, he’s never able to push back against that destruction and realize his vision for a better world. The story ends with him dying as he regrets this fact. However, the game’s lamentful tone shows up in other areas, too. It shows itself in the visuals, where military machinery often casts an imposing shadow upon the land, forecasting its legacy of senseless destruction. It shows itself in the music, whose orchestral movements are equal parts grand and wistful.

While Elemental Gearbolt received favorable reviews at the time, the game never received a follow-up of any kind and outside the occasional hidden gems list, it’s not the kind of game that many people remember. Historical perspective makes it easier to see why that may be. While the game was praised for experimenting with genre convention (GameSpot praised it as “unique”, and GamePro said it had “an unusual RPG flair”), in the end, much of Gearbolt was quite ordinary. Its focus on quick gunplay and deliberate film-like pacing of level progression would feel right at home alongside contemporary light gun shooters. In addition, its fantasy motifs (and the ideas it explores through them) had been firmly established in popular anime all throughout the 1990s. So far from being a challenge to the status quo, Elemental Gearbolt might make more sense as a strong affirmation of multiple status quos. In this light, its history makes more sense: that strategy may have garnered it praise in the moment (which was genuinely earned), but it might not have been enough to guarantee the game any legacy beyond that.

Working Designs made a few changes upon localization, though less so than normal. The Japanese release includes a radio drama that told the game’s backstory; rather than dubbing, they instead added a summary of it in the manual, and replaced it with voiced outtakes from the other cutscenes, a staple of their PS1 releases. The game also ends after a few stages in Easy mode, requiring playing at Normal or higher to see the whole game. However, the difficulty levels have been substantially rebalanced, making the English version much, much more difficult. It also adds support for Namco’s GunCon light gun, which at the time, was the only accessory that was really supported in North America. The Japanese version only supports the Konami Hyper Blaster, which had barely seen any support outside of some early Konami games. 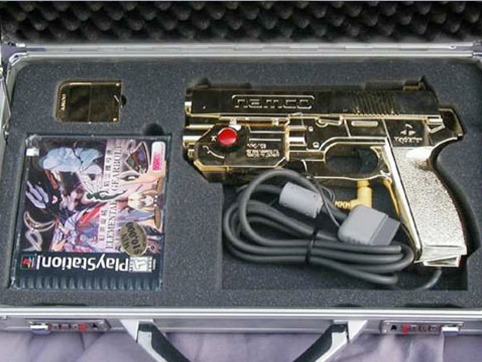 At the 1998 E3, Working Designs gave out an extremely limited number (about 40) of an “Assassin’s Case” special edition, which included a large case, the game, a golden-platered GunCon, and a golden colored memory card. It’s a huge collectors item and is valued at several thousand dollars. The US release of the game alone is pretty pricey on its own, but nowhere near this amount, of course. 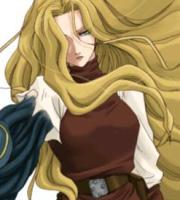 Tagami in Castle of Shikigami III

Tagami, a mysterious being in black who appears in the intro of Elemental Gearbolt, shows up again as a playable character in the shoot-em-up Shikigami no Shiro, also developed by Alfa Systems.