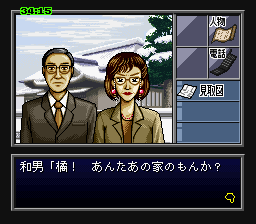 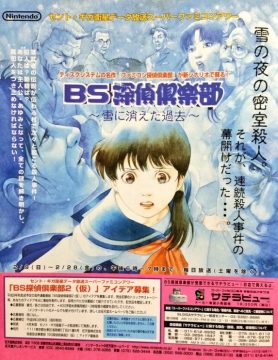 Since it was only distributed via Satellaview broadcasts, there is no official cover for this game and this flyer is the closest thing to what a cover could have looked like.

The importance of emulation and recordings in video game preservation is seldom as apparent as when dealing with digital-only games from the 1990s and early 2000s. Services such as Nintendo’s Satellaview add-on for the Super Famicom (SFC) and Sega’s Sega Channel for the Genesis were years ahead of its time, distributing video games downloads over satellite or cable-TV modem in the mid-to-late 1990s for a monthly subscription fee – but have proven difficult to fully preserve. Such is the case for the third and last game in the Famicom Detective Club series, BS Tantei Club: Yuki ni Kieta Kako (“The Past that Disappeared in the Snow”), the peculiar last entry in the series that was broadcast over the Satellaview satellite modem in three parts in 1997, eight years after the release of the second game. Luckily, fully playable rom dumps of all parts of the game made from surviving Satellaview memory carts exits, but they lack the enhanced audio that was co-broadcast with the game data. However, for some games (including BS Tantei Club) VHS recordings of playthroughs made by players at the time have survived and are precious resources to learn about how these games were intended to be played. It is therefore possible to access all parts of this game, albeit in a disjointed way: either as a game without sound, or as a recorded gameplay movie without interactivity. 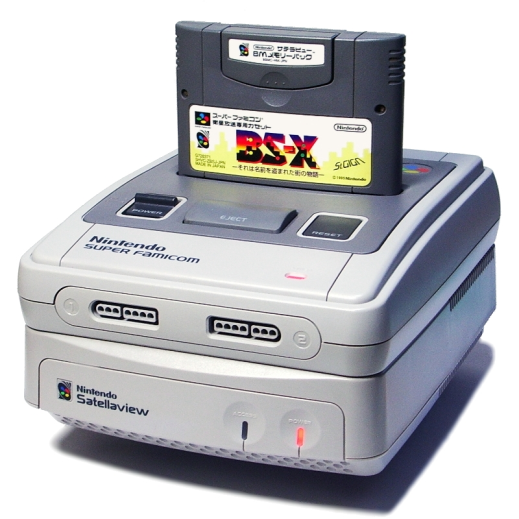 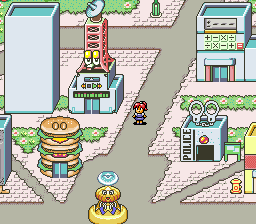 The Satellaview system was able to download content from the Broadcasting Satellite (BS) Network (hence the BS in BS Tantei Club) being transmitted at specific times: e.g. games, magazines, music and Nintendo newsletters. To use the service, users needed a paid subscription, a SFC with a Satellaview unit, BS tuner, satellite dish and a specific Satellaview cartridge. In typical quirky Nintendo fashion, the cartridge, named BS-X それは名前を盗まれた街の物語 (“BS-X: The Story of The Town Whose Name Was Stolen”), does not stop at just being a menu interface, but is a hub world presented like an Earthbound-style RPG where the player has to walk their avatar to different buildings in order to access different content. Like a regular TV broadcast, most games were streamed at scheduled time slots and could only be played there and then. This was specifically the case for the so-called SoundLink games that used custom audio streamed via satellite radio that the Satellaview unit would play in sync with the game. This allowed for much higher audio quality than the Super Famicom itself could produce, and in the case of BS Tantei Club it was used for music and voice acting (!). BS Tantei Club was broadcast in three parts during February of 1997, with each part being rebroadcast in multiple slots for about one week each. The drawback of the SoundLink was that games could only be played on fixed broadcast slots, and while the roms of many SoundLink games have been dumped, there are no dumps of the satellite audio (if you don’t count the VHS-quality audio on the aforementioned recordings), and thus the games can never be played as originally intended. 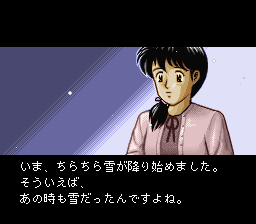 This time you play as Ayumi Tachibana, the second half of the franchise’s teenage detective duo (the male protagonist from the previous games does not make an appearance at all in this game). The story begins with a 17 year old Ayumi writing a letter to her friend Reiko Nomura, reminiscing about a case that took place some time ago in the snowy village of Ochitani. Ayumi had travelled there to visit her mother Toshie, who had fallen ill and was staying with her parents while receiving treatment. Ayumi’s childhood friend Reiko, a couple of years her senior, is also in town and they catch up over dinner with Toshie. The next morning Reiko wakes Ayumi and tells her that the previous mayor, Gozo Kusano, had been found stabbed in the chest in his home, and that Toshie was being interrogated by the police for finding the corpse. The victim was found in a smaller side building on the estate, but there were no footprints on the snow covered ground which makes Toshie a main suspect. As Ayumi begins to investigate, she learns that there was an incident 18 years ago when two villagers were found dead after protesting against plans to destroy a local temple to make way for a new highway. The next morning, the current mayor and the son of the previous victim, Kazuo Kusano, is found stabbed to death with a spear in said temple. As events of the past keep resurfacing, Ayumi learns that her family might be more involved in the case than she initially thought. 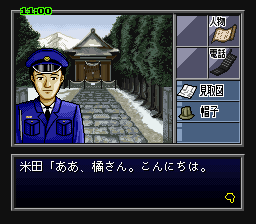 BS Tantei Club differs quite a bit from its predecessors due to it being a SoundLink game, and the benefits of the superior audio come at the cost of highly reduced interactivity. In order for the Satellaview to be able to pick up the satellite audio the game runs on a timer (displayed in the top corner). Each of the three parts of the game are about 60 minutes long, and in order to sync with the audio broadcast, the game will auto-advance to the next scene at designated times. Each scene typically starts with a fully voiced cutscene, followed by a limited period of gameplay where you can investigate the current scene to learn more details about the story (any dialogue encountered in this phase is non-voiced); this repeats for the full hour, at which the player need to start the next part to continue the story. This ultimately means that you can beat the game without giving it any input (i.e. watch it like a movie): just wait until the time is up in the current scene and the narrative will progress anyway. 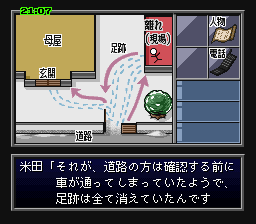 The selling point of this system is that the more you investigate in each “free-time” period, the more details about the story you learn; in fact, this is how the game wants you to play, as each of the three parts end with a status screen showing you a percentage of how much of the story you experienced (and thereby suggesting to replay it to see more of the story). It is clear that this was a trade-off the developers had to make to get the, at the time groundbreaking, enhanced audio, but the timed advancement makes for a very lackluster adventure game. Although the list of menu commands is shorter than in the previous games to compensate for the limited timing, you have to be pretty fast and focused during the free investigations and make the correct choices and deductions to get the best out of the narrative. Even if Ayumi is in the middle of a piece of dialogue or thought process, when the timer hits the next pre-programmed event, anything you were doing will be cancelled and cannot be redone for the remainder of the playthrough. For Western players that can read enough Japanese to play untranslated games, but have not reached the reading speed of a fluent speaker (and would like to take their time with their Japanese language games, looking up new vocabulary and grammar points), the timed nature of BS Tantei Club makes it a tough one to play. The limitations of the SoundLink format definitely lends itself better to action games such as BS Zelda, where the timed nature could be argued to add rather than detract from the core gameplay loop by turning a Zelda dungeon into a time attack game. Interestingly, another Nintendo SoundLink adventure game, BS Shin Onigashima (1996), was so popular that it was converted to a regular (non-SoundLink) game and sold on cart as Heisei Shin Onigashima; this was never the case with BS Tantei Club though, which might be attributed to its lower popularity (it was only broadcast once, whereas other BS games had multiple re-runs). 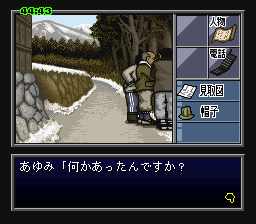 Gameplay quirks aside, the game looks and sounds great. The voice-acting is solid and features today established voice-actresses Yuko Minaguchi and Mariko Suzuki as Ayumi and Reiko respectively (Minaguchi would later reprise her role as Ayumi in the Switch remakes of the first two games in the series). The choice of continuing the previous game’s focus on Ayumi by giving her additional backstory and screen time was an excellent choice, as she arguably is a much more fleshed-out character than the male protagonist ever was. Series’ creator Yoshio Sakamoto is credited as a producer, but the script was written by the director Masayasu Nakata. There are fewer flirts with the paranormal in this game than in the previous two, but if that is due to the change in writer or the much shorter run time is hard to tell. The endgame does come across as a little sudden and truncated, but that is perhaps to be expected with such a short game. 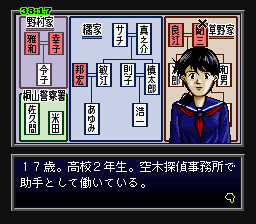 Ultimately, BS Tantei Club is an experimental oddity that never fully realizes its grand design ambitions and can only really be recommended to big fans of the series or SoundLink games. Today when audio storage no longer is an issue in video games, and the first two games have been remade for the Switch, it would however be interesting to see this game remade as a non-timed adventure game. The story would probably need some expanding on in that case, but that should not be an issue given the good foundation of the existing plot.

VHS recordings of the gameplay:

Information on how SoundLink games worked:

An overview on the Satellaview hub world (an English fan translation is available):

A yet to be unfinished fan remake of the game in Famicom style (unclear if the project is still active):

Old TV ad for the game that does not show any gameplay footage, but that the hub world changed according to season (here: winter): 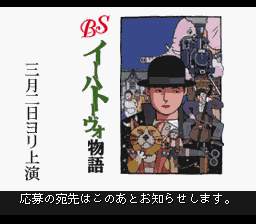 Famicom Detective Club Part II: The Girl Standing in the Back