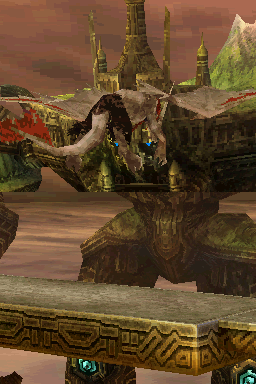 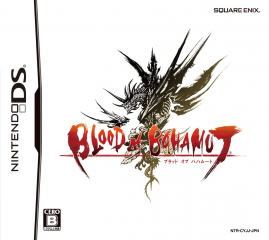 Blood of Bahamut is an action role-playing game developed by Think & Feel for the Nintendo DS and published by Square Enix. They also developed Final Fantasy XII: Revenant Wings, which is the only one of their titles that received an international release.

The legend says that, long ago, the god Bahamut took the continents and gave birth to the Behemoths with its blood. The Earth itself was covered in an unrelenting mist that robs humans of their life force, so humanity took action and battled and defeated the Behemoths. The monstrous beasts fell into a slumber, so huge nations were built on their back to keep safe from the mist on the surface. However, every 1,000 years, the Behemoths awaken, and they must be fought and pacified to keep their land. The story follows a group of seven characters as they fight the hulking monsters. 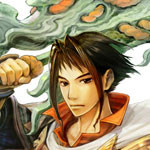 The main protagonist. He wields a sword and has summoning powers, and is part of the Gigant clan. 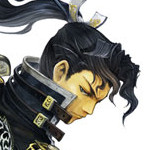 Another Gigant resident, who wields a katana. He wishes for him and Ibuki to become heroes by defeating the Behemoths. 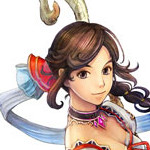 The only female member of the party, she wields a cane staff and also lived on Gigant. Often acts as moral support for the group.

Commander, and sole survivor, of the Ifrit clan, wields a battle axe, and intends to defeat Ifrit even if it’s the last thing he does. 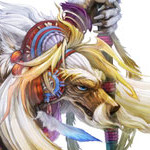 The oldest member of the group, he uses spears. He lost his lover 1,000 years ago while fighting Fenrir, and he’s resolved to defeat it before reuniting with her. 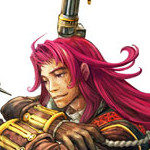 He abandoned the Shiva clan and decided to travel the world as a free spirit, but he has a reason to return. He wields a handheld cannon. 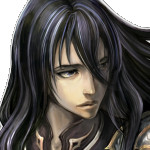 A greatsword wielder who lost his memory, he’s trying to find out who he is. 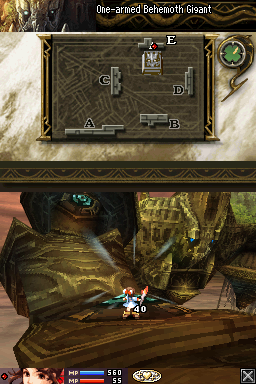 In the game, the Behemoths are rendered fully in 3D. Perhaps aren’t as big in game as the lore would make you believe – not quite enough to hold a whole country full of people – but they’re still several magnitudes bigger than your player characters and look impressive for a Nintendo DS game. All other visual elements, including characters and normal enemies, are represented with sprites which are adequate, however, there are just a few enemy designs, and they are reused throughout the game. The stages are just floating platforms and there’s virtually no change between the different missions to them, making them the weakest part of the presentation. The music by Naoshi Mizuta (Final Fantasy XI, Final Fantasy: The 4 Heroes of Light) isn’t remarkable, but it won’t get in the way either.

Blood of Bahamut is split into missions, which end with cutscenes containing story or interactions between characters. The top screen displays the map of the stage, the position of both our character and the Behemoth they’re facing, as well has the health bar of the Behemoth and any companions. The bottom screen shows the character’s health, MP, and equipped abilities. You can move your troops by using the D-pad along with the shoulder buttons or the stylus, and attacking enemies is done by tapping to target an enemy. To use abilities, you touch their icon to select them, and touch an enemy if they are offensive, or touch it a second time if it’s supportive. 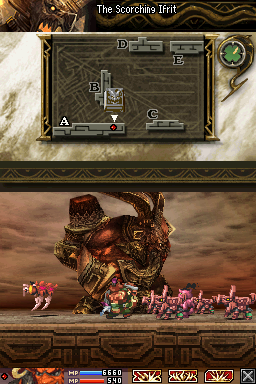 The missions objectives are always to go to a certain point, destroy certain cores, survive a set time, or defeat the Behemoth. It’s a bit unfortunate that the game is inflexible with its objectives, so depleting the Behemoth’s life in a mission where you aren’t asked to do so counts as a failure. That said, they have so much life that this isn’t something players are likely to do accidentally. During the mission, the Behemoth will attack you, either from a distance with attacks like throwing rocks, or using its limbs. You’ll also encounter enemies in your platform that often times must be defeated in order to advance through the stage. Your character has special abilities that can be unlocked and upgraded by using materials found by completing stages – to use them, you tap them to select them and then do an attack in the game. These special abilities cost MP and have a cooldown, depending on the character. Their basic attack will be either melee or ranged, if you’re using a melee character, and you attack a Behemoth that is far away, it’ll use a ranged attack automatically.

Your character passively gets their health and mana restored, which is useful as it’s hard to avoid taking damage from normal enemies. These normally appear in groups and, because attacks aren’t instant and some enemies do ranged attacks, it’s very hard to avoid their attacks, so they’ll be constantly chipping away at your health. Enemies drop items at random, which can be either materials or items to restore your health and or mana. On the other hand, it’s relatively easy to avoid damage from Behemoths after you learn their attack patterns. 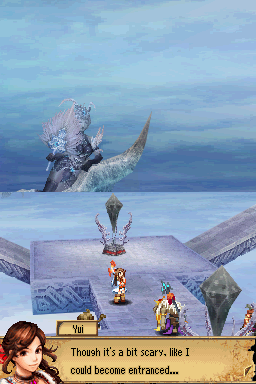 In the first mission, you use Ibuki, but from the second onwards, you are allowed to change the character you’re using. Between missions, besides changing the character, you can spend money to get a materials, sell what was gathered for money, and buy new equipment. Each character has a different kind of weapon they can use, and although the basic gameplay is the same, they each have different abilities, attack speed and range.

The game rewards you with experience and materials when you finish a mission, as well as giving you a bonus based on damage and time taken. Unfortunately, experience isn’t shared between your party, only the character you’re using will benefit from the experience, but the game lets you replay old missions. Because the game records your best rank, that’ll offer incentive to some to replay the levels, so you can level up your other characters and improve your rank. Additionally, when a Behemoth is defeated, new optional missions become available – these tend to be longer, tougher battles than the ones encountered during the story missions. 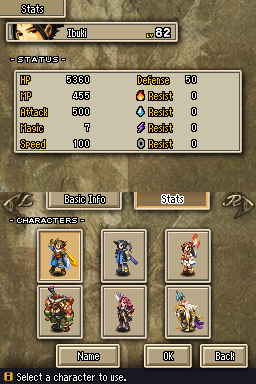 Characters have an equipment and abilities loadout. Acquiring new pieces can be locked to story progress, as the materials required to craft them are tied to missions, and story missions can’t be skipped ahead. Abilities only require three kinds of material, so players can easily gather what they need to unlock a particular ability. While each character has ten skills (one available from the start), they can only choose three at once.

There are two kinds of offensive abilities – the ones that can be aimed at the Behemoth, and the ones that only work against enemies surrounding the player. Some abilities cause elemental damage, too – supportive abilities can affect resistances, speed, health, or even teleport you to another player. Each enemy and Behemoth has elemental weaknesses, besides taking extra damage from them, there’s a chance for the Behemoth to stop momentarily or slow down due to elemental attacks, and some cores can only be shattered with specific elemental attacks. 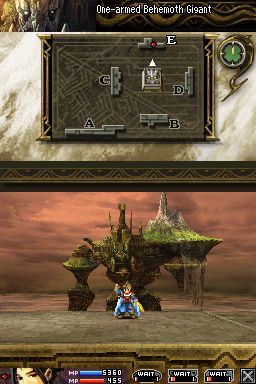 The game has a mode called Sealed Slates where you have to interact with elements in the correct order to unlock extra missions. These, besides being extremely hard, feature unique material drops to get special equipment. This is essentially a password system as there’s no logical way to solve them, and the solutions were released by Square-Enix over time.

While players could easily be reminded of Shadow of the Colossus, due to the existence of giant enemies that you can get on top of to attack, this isn’t a solitary experience as even though it can be played solo. The game is really meant to be played in local multiplayer with up to four players, each of whom must own the game. Compensating for the absence of teammates is no easy task, as leveling up only increases HP and MP, attack and defense stats depend on equipment, which in turn depends on materials procured from specific missions, and while individual abilities can be leveled up, MP costs increase and their stats don’t change much from level to level. The mission objective and development will be the same regardless of the number of players, and the maximum possible experience received increases in multiplayer. Although having more people make the game a lot easier, as they can focus on different things, and support abilities target the whole party, however, if anyone in the party dies, it’s game over for everyone. This game was likely meant for Monster Hunter fans in Japan, which grew to enormous popularity in the late 2000s in the PSP – since the game, which focused primarily on local multiplayer, didn’t take off in nearly the same way outside of the country, this is likely the reason why the game wasn’t localized. As a single player experience, it’s lacking much long term appeal.

A translation patch exists for the game, and it’s required for those who don’t know Japanese, figuring out the game mechanics is easy by trial and error, but you’ll need to actually know what the text says to figure out what’s the objective of each mission, as actually killing the behemoths without meeting the criteria will result in a game over unless you were tasked with just killing them in that particular mission.

Final Fantasy Tactics A2: Grimoire of the Rift