Taking one final stab at bringing the Battletoads to a wider audience, Rare teamed up with Electronic Arts to produce an arcade-exclusive installment of their franchise. Simply known as Battletoads (or Super Battletoads in Japan), this would end up being the last game to feature the warty trio and their outrageous adventures. But as far as last stands go, this one’s a doozy. Completely refocusing the series back into a straight-up brawler and upping the ante with surprisingly graphic violence and equally imposing difficulty, the arcade Battletoads is as fitting a send-off as a worthy series could deserve. 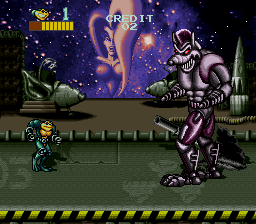 In a lot of ways, this seems like the Battletoads game Rare had always wanted to make; what Battlemaniacsmight have been had Nintendo been a bit more lenient in their censorship policies. Most of the basic sprite-work and game engine are based on that title, but taken to the next level. All three Toads are selectable, each with his own unique animations and slightly different speed and strength despite sharing the same basic attack patterns. You’ve got your standing attack, a dashing attack, and a jumping attack, plus a move that only activates when enemies approach from both sides and special “Super Smash Attacks” in some stages that can clear the screen but can only be used a few times. 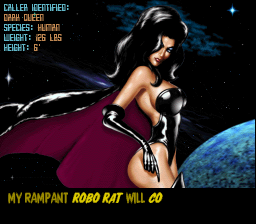 There’s also a number of different weapons that can be picked up and used for a short time, such as exploding crates, laser pistols, and huge chunks of debris. You can also throw many of the enemies, which comes in handy quite often. Essentially, it’s Battletoads finally realized as a traditional beat-em-up without all the gimmicky platforming and vehicle stages of the console versions. There are slight variations in the levels, but nothing too drastic: stage two is single-plane and stage four is vertical like the old Wookie Hole. Only the final stage mixes up the formula, as it’s a Contra-esque shooting stage where you ride on a spaceship and have to fend off attacks from all directions. But in general, survival is no longer based on perfect timing or tight reflexes, but controlling crowds of enemies and getting a feel for invulnerability frames. 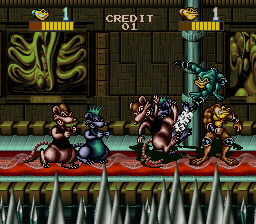 Despite this, the games’ sense of style is still just as distinct as ever. There are both familiar elements reimagined and a ton of new enemies and ideas, all brilliantly animated and memorable. Dave Wise’s soundtrack is every bit as well-crafted as that of Battlemaniacs and the sounds have been enhanced to include effects like digital speech. Most noticably, the level of on-screen violence has been seriously amplified. Smash hits can decapitate your enemies, bosses get bruised and bloodied as the battle commences, and blood sprays by the pint at nearly every impact. It’s excessive and awesome and one of the main reasons this title never left the arcade, though since the blood could be toggled off by a DIP switch, it shouldn’t have been that big a deal to remove it. Perhaps a bigger reason Battletoads never escaped the arcade is that its humor leans toward the disgusting side of the spectrum. General Slaughter crudely spits at you during your fight with him, certain rats will vomit copiously after recovering from a tough blow, and you’ll even find a couple of rats on the can, if you catch my drift. This certainly casts the title as immature and the novelty wears off very quickly, but its hard not to smile the first time you witness one of these low blows.

For the record, that’s not a carefully positioned punch for screenshot gold: your Toad actually grabs onto the rat’s genitals and wails on them with his other fist. This is the sort of humor the designers were intentionally going for with this one. 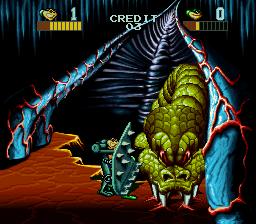 With all of the direction changes involved, it’s refreshing that the series’ difficulty has remained intact to the bitter end. Large crowds are the norm and there are no extend features, though life-saving health flies are back and more numerous than in past games. Many enemy encounters are reasonably handled, but the sheer number of the regular rat, pig, and mutant forces can be overwhelming if you haven’t figured out which attacks work in which situations. Some scenarios are brutally unfair, particularly with gangs of the bigger damage-sponges. The worst of these (the huge rats that take up half the screen) feature a long reach and near-universal attack priority. The bosses are especially guilty of this (though the battles with them are the most impressive in the series). For once, multiplayer rectifies the problem: Battletoads was produced in 2-player and 3-player versions for maximum on-screen chaos. Even with these odds, it’s still an impressive feat to see this one to the end without heavy quarter-feeding. With six fairly long levels and a bonus round to break up the flow (you smash up a vehicle like in a Street Fighter), arcade Battletoads demands a diligence from its players that is perhaps more imposing even than its predecessors. 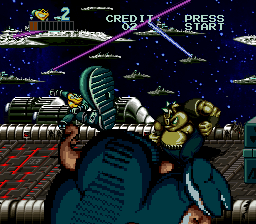 To date, despite the feeling that its graphic and musical style would have fit perfectly with Genesis hardware, there are no ports available for the game, making it somewhat of a lost classic. It’s a darker, grimier take on the difficult but otherwise lighthearted series, with comic book violence and a frustrating but enjoyable pace. 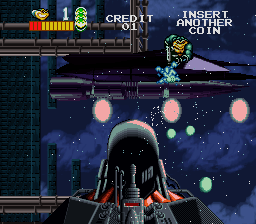 This Battletoads entry didn’t see a home port until it was compiled in the Rare Replay collection for the Xbox One in 2015. 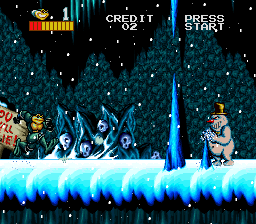