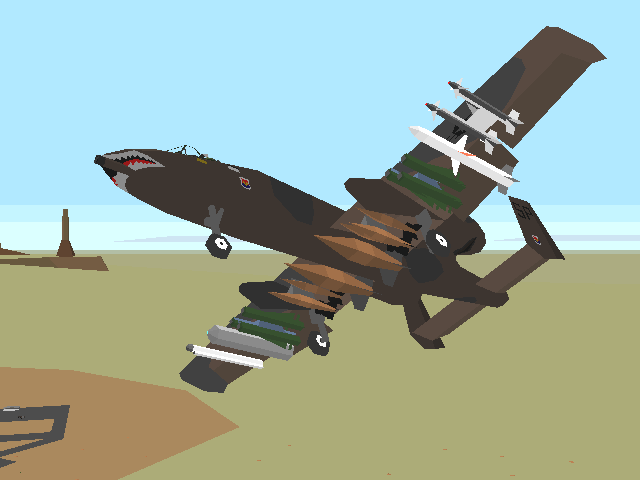 This game was selected for review by a generous Patreon donor! Learn how you can nominate a game of your choosing to feature on HG101 here!

In the early 90s, gaming enthusiasts in possession of an Apple computer were in a comfortable spot. As Microsoft worked hard on becoming the dominant business software company in North America, the gaming market was very much divided and ports, often of varying quality, were ubiquitous. For many a home computer, this turned out to be quite the struggle, leaving demanding games either to their more powerful cousins or having them reduced to bland graphics and choppy frame rates.

While the Mac gaming market was fairly small, Mac owners gained access to Hellcats Over the Pacific, developed by Parsoft Interactive, in 1991. Hellcats Over the Pacific, simulating missions of a Grumman F6F Hellcat in the Guadalcanal campaign, boasted not only colorful polygonal flat-shaded graphics, but did so in a resolution of 640×480 when 320×240 was the standard. Best of all, it did so without the frames crashing faster than the enemy planes. This can partially be attributed to a trick utilized by Eric Parker, the creator of Hellcats: the game does not redraw the entire screen in-between frames, resulting in decent performance even when the game is run in a comparably high resolution. Hellcats: Missions at Leyte Gulf, a standalone expansion pack released a year later, further optimized the game. 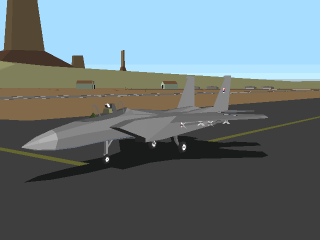 Nevertheless, Hellcats Over the Pacific had a couple of flaws, among them a lack of mission variety, lack of true hard object physics, and tightly scripted behavior of the AI. Parsoft Interactive went to address these issues in the game’s quasi-sequel, A-10 Attack!. A-10 Attack! retained Hellcat’s graphics engine in an improved form, but replaced the flight engine with a more realistic one. For an extra layer of immersion, players could play the game on no less than three monitors. Instead of the Grumman F6F Hellcat, players would pilot the titular Fairchild Republic A-10 Thunderbolt II, also known as the Warthog. The A-10 entered service in the 70s, but did not rise to fame before Operation Desert Storm. In Iraq, the A-10 saw combat for the first time, adding flight simulators to the long list of video games influences by the Gulf War.

A-10 Attack! softened the  many hardcoded limits of Hellcats via the so-called Virtual Battlefield Environment system, allowing the game to read in-game objects, missions, and maps from files. While did this ease the work of the programmers, neither documentation nor comprehensive tools for the VBE system were ever released, which severely restricted its potential and limited users to modifying missions without being able to create new ones. This missed opportunity also left A-10 Attack! behind its DOS rival Red Baron in regard to content.

Furthermore, A-10 Attack! was delayed in order to create a native port for the then brand-new PowerMac. When the game shipped in 1995, a year later than originally planned, F/A-18 Hornet was already available. F/A-18 Hornet, also a Macintosh-exclusive flight sim, had started its development under Parsoft Interactive. After a falling out with publisher Graphic Simulations Corporation, the two parted ways. Graphic Simulations Corporation retained the rights to the Hellcats games and F/A-18 Hornet and hired a new team to finish development of the latter. Whether or not F/A-18 Hornet is on par with A-10 Attack! – or possibly even the better game – is debated among fans. Undeniable is that the former received a number of updates and sequels, indicating its success.

In order to realize the accurate physics of A-10 Attack!, Parker and his team used a Silicon Graphics Indigo, one of the most capable workstations of the time and considered to be second to none with regard to hardware-accelerated three-dimensional graphics rendering. Converting the complex floating-point math of the SGI Indigo to fixed-point math usable by Intel CPUs allegedly took weeks. 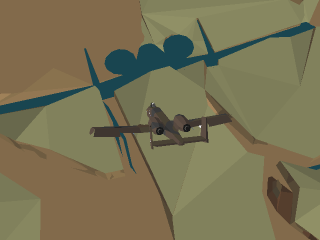 A-10 Attack! received its own sequel, A-10 Cuba!, in 1997. This time, the backdrop is an invasion of Guantánamo Bay by guerilla forces instead of a Soviet assault on West Germany. Initially, A-10 Cuba! was intended to be a mission pack for A-10 Attack!, an idea that was dropped halfway through development, only to be implemented with a later patch. Said patch allows for all maps to be played through either game. A first for the series, the games was released for Mac OS as well as Windows. Macintosh owners got the mission editor, whereas owner of the Windows version, published by Activision, got access to a multiplayer mode for up to eight players.

A-10 Cuba! comes with twelve missions as well as four training scenarios that teach new players how to take off, land, and assault air as well as ground targets. All twelve missions are set in a virtual realization of Cuba. The relative lack of variety that this limited setting offers is more than made up for by the amount of detail put into it. This becomes most evident when the player goes off the core mission area. Where other titles would have placed nothing but plains or mountains, A-10 Cuba! offers structures and other features, adding to the immersion and simulationist aspect of the game.

Equal care is given to the simulation of the Thunderbolt II itself. As A-10 Attack! does, A-10 Cuba! offers the full range of the Warthog’s arsenal, including missiles (both the laser-guided AIM-9 and the heat-seeking HARM), cluster bombs, flares, and even a fire extinguishing systems should the engines catch fire. The centerpiece is of course the GAU-8 Avenger Gatling cannon, the Warthog’s iconic anti-tank gun.  By default, players are expected to use mouse and keyboard to control their craft, but for a more authentic experience, a hands-on system is included as well. Using that, players can manipulate buttons and switches directly. While generally slower than keyboard commands, this more direct approach comes closer to piloting an actual Warthog and does not require having to memorize all the key mappings. 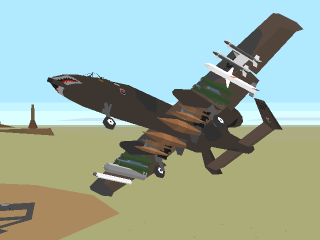 During the actual game, A-10 Cuba! offers two views: the direct cockpit view as well as a view of the mission map where friendly, neutral, and hostile targets are indicated. The latter view is more detailed and allows players to script fight patters for their Warthog, whereas the former is need for precision maneuvers and strikes. Hostile forces are only indicated on the map after the player actually spots them, adding exploration as a tactical choice players have to make. Depending on the situation, players can also switch the camera mode entirely, which allows them to admire the Thunderbolt II from the outside, follow dropped bombs to their target to watch the destruction up close, or utilize the build-in video feed of their AGM-65 Maverick missiles.

A-10 Cuba!’s precise modelling is not limited to the player’s weapons, however, but also to the Warthog itself. Almost all of its systems can be damaged and destroyed separately, leaving players with a reduced arsenal. Damage to the pilot is also simulated, and unlucky players might find themselves injured or dead despite their Warthog still being capable of flight. Besides the obvious enemy fire, hazards include bombs dropped from too low an altitude or the plane being damaged by accelerating too fast. Even finishing a mission is sometimes not enough, as there is always a chance of a crash landing due to damaged landing gear. This may sound punishing, but while A-10 Cuba! is complex, it is also fairly transparent, and enthusiastic new players will quickly stop being their own worst enemy.

Despite its high appeal to flight simulation enthusiasts, A-10! Cuba did receive some criticism. As with A-10 Attack!, its content is limited despite the mission variety. The game’s documentation is lacking, with the comprehensive user manual characteristic for flight simulations being absent. The graphics retain the simplicity of older flight games and no doubt took a backseat to make way for the gameplay. As a result, A-10 Cuba! received both praise for its focus on accuracy while not stirring into the realm of more arcade-like flight sims, and criticism for its lack of new and shiny texture-mapped graphics. 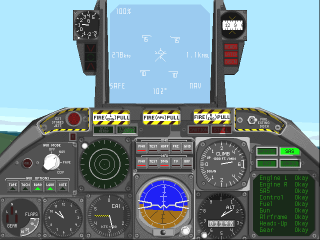 That said, A-10 Cuba! was by no mean the only game to take this path. Its companions were other titles such as Su-27 Flanker and the aforementioned F/A-18 Hornet series, and its visual purity comes with a certain appeal. Criticism on the game’s difficulty was equally divided at the time of its release. A-10 Cuba! is notably tougher than its predecessor, though a good part of its player base probably already played A-10 Attack! and other flight simulations, which excuse the increased difficulty as par for the course of a game that is close to an expansion pack. Not for Windows users, however, who never got to play any of the prior Parsoft titles.

A-10 Cuba! never received a direct sequel, but Parsoft went on to release Fighter Squadron: The Screamin’ Demons over Europe, their fourth and final game, in 1999. Fighter Squadron used an entirely new engine, and its development was troubled. This leaves A-10 Cuba! as the high water mark for Parsoft and possibly classic Macintosh flight simulators in general.