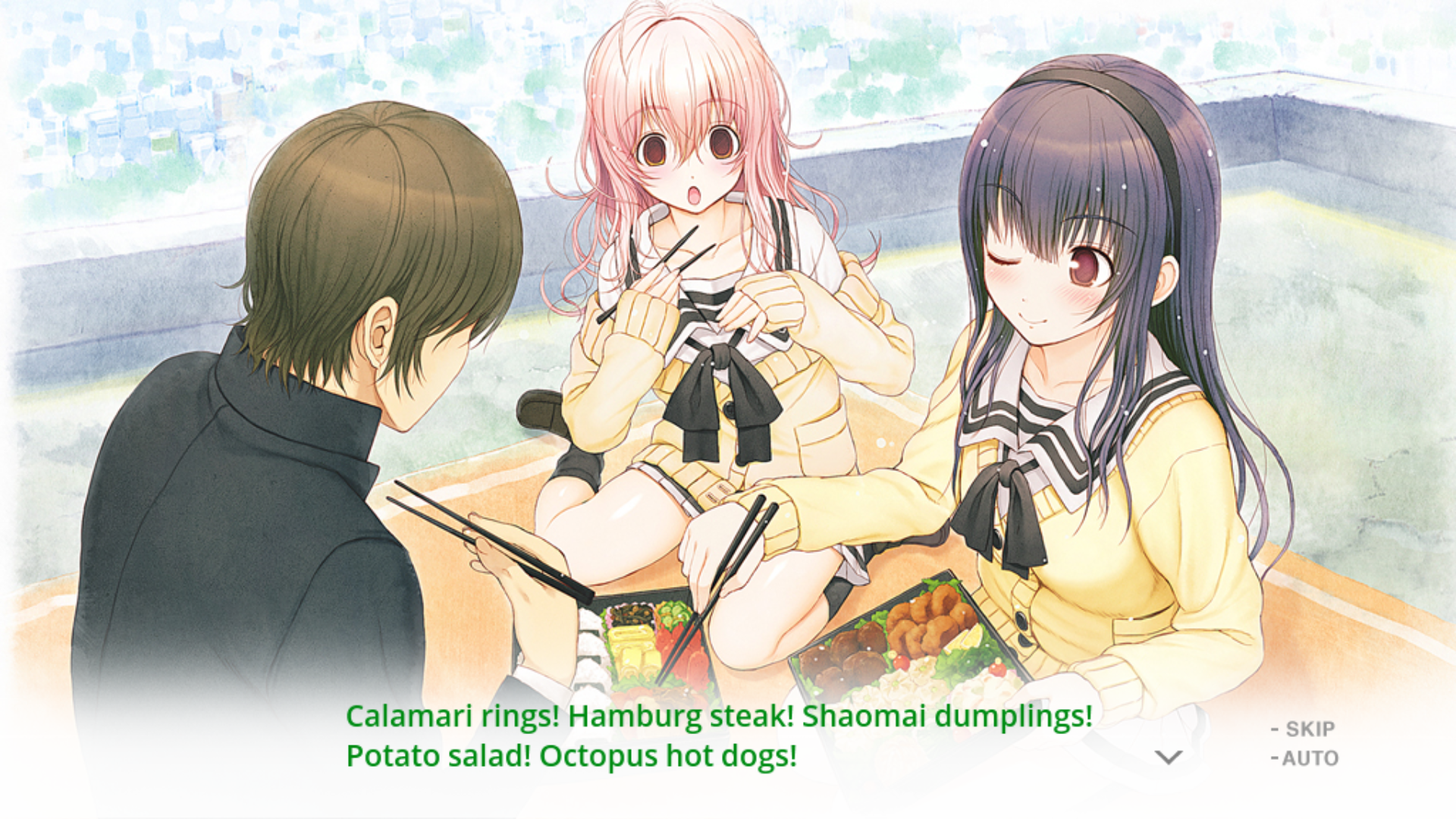 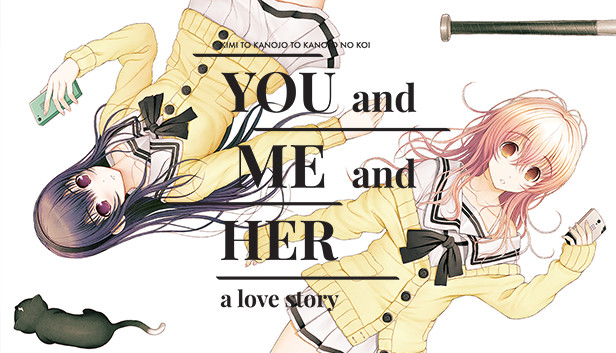 Breaking the fourth wall is not at all uncommon. For hundreds of years, it’s been an often used trope in plays, movies, and books, doing away with the boundary between character and audience and instilling the idea to the viewer that what they’re enjoying may not be too distant from reality. Video games, however, is where this fun gimmick grows into a full-on effective tool. In a medium where you are the one controlling the main character, moving them left to right or choosing which attack they’ll do next, a fourth wall break would undoubtedly be the most effective. And while the first thought for many developers would be to use this as a one-time trick, if used correctly it could deepen immersion or evoke greater emotions from the player. Two games that are easy picks for this would be Undertale and Doki Doki Literature Club, but there was one visual novel that not only pulls off the archetype in its own interesting way, but did it before those two were even released:

YOU and ME and HER: A Love Story.

Saying that it breaks the fourth wall is not a spoiler, because this game proudly wears it on its sleeve right at the start.

Nitroplus developed this particular hidden gem and released it in 2013. It’s understandable it didn’t gain much widespread recognition in the states as it wasn’t localized until 2020, nearly seven years after its initial release. Though a lesser known studio, Nitroplus has done some incredible work, releasing Steins;Gate in a collaboration with 5pb. As such, just how unique is the story?

Well, from the outset, not much. 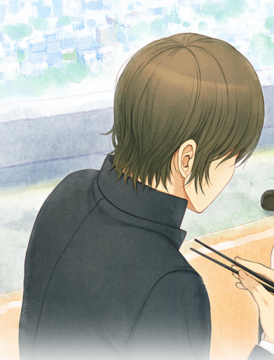 The titular bland protagonist, neither a loser nor a stand-out student. As he is supposed to be the lens of which the player views the game, his face is rarely shown beyond a few eye-less pictures. 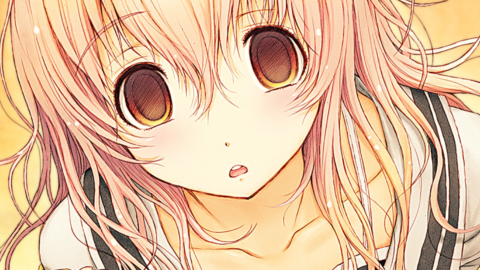 The pink-haired oddball. She uses her cellphone to contact God. She also seems to believe that everything is just a game. Weird, huh? 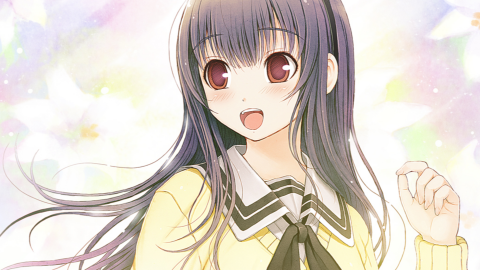 One of the most popular students in school who excels at everything. She used to be friends with Shinichi, but the two have long since drifted apart. 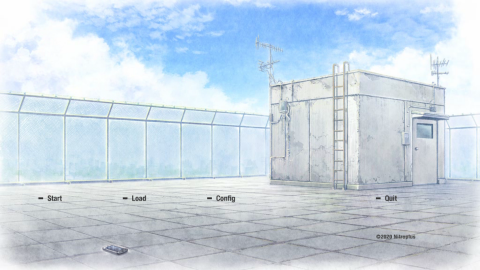 The story starts with Shinichi and Miyuki mistakenly meeting one another at the rooftop, but not before the main character picks up a phone, plays the exact same visual novel you’re playing on a phone he found, then runs into Aoi. She takes no time in revealing her otherworldly knowledge to the player, and speaks her intention of helping Shinichi go down Miyuki’s romance path. Of course, to the duo this is complete nonsense, so they quickly shrug it off. However, Shinichi becomes worried for Aoi, believing her to be mentally unwell, so he ropes in Miyuki to help try bring some normalcy to her. It sounds about as generic as generic could be. Other than the whole, you know, omniscient Aoi stuff.

While this is how the story initially proceeds, by no means is this how it continues. Just like a similar visual novel of this nature, it grows into something of its own and builds off the knowledge that it’s just a video game (Seriously, one of the first things you hear from Aoi is “This world is a video game!”). There are some odd patches in the story, but overall, it hits hard and that’s thanks to the use of the fourth wall. 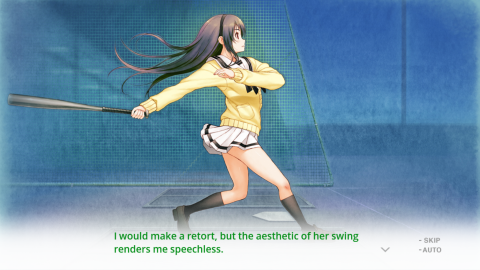 But it’s not just one part that redeems the entire game. You only need one glance to see how much work the developers put into the art style. Every pose of the characters, every CG in the game, everything is able to convey to the player all that it needs to do in a subtle way. One part of the designs that really jump out have to be the eyes. Expressions are everything, and this game really hits those high notes with the way the characters look at you. This is the case with Aoi in particular, with her eyes always looking forward, like she’s looking through the screen and into your own soul. Alongside the normal character art, this game is full of CGs! Seriously, you can’t go through a single scene without at least two CG’s to back it up. And, like the art and expressions of the characters, there is so much work put into each one. If you want to collect every CG, beware: It will be a trial due to the sheer number. Still, it is the quality, and not just the quantity, that makes these pieces of art stand out to me.

This game even has voice acting, though the translation doesn’t have a dub. It may be for the better, though, because the Japanese voices are great. Each voice actor is able to express their character’s personality and reflect their emotional state perfectly. The main character’s guy friend a tad bit annoying, but it made sense considering he’s the comic relief. The localization is able to get the message across very well, and serves as a greater medium for the real meat of the visual novel. 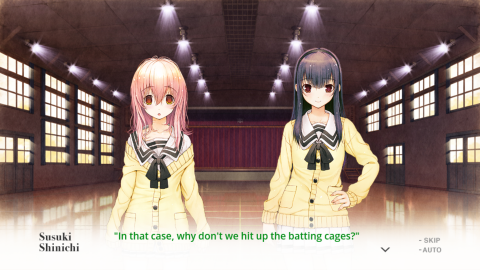 Finally, there’s the music. And again, this game had real work put into that, even adding lyrics in some of the songs! The entire game’s soundtrack is beautiful, with or without vocals, though.

But, would you play this game for all those things, though? No. They only serve to complement the incredible story that this visual novel presents to the player. Unlike Doki Doki Literature Club, which used this archetype as a method for increasing its horror element and instilling a greater sense of dread into the player, You and Me and Her uses the fourth wall in a similar way to Undertale. You become an important character. You become a friend with the other characters. You choose what to say to them. It serves to immerse you more than it does to scare you. 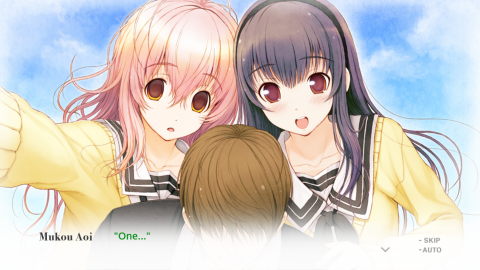 It does have its unsettling moments, but by no means is this visual novel a horror game. It’s also interesting, then, how the game is not afraid to point this out where the other two games rarely did so at the start. With Aoi as a self-proclaimed avatar, she is never hesitant to tell you her job, working desperately to get Shinichi on the romance route with Miyuki. She’ll tell you that it’s a game, or explain that she can’t get a cold standing in the rain because “there’s no CG” for her getting sick. Yet, this obvious pointing out does little against building your relationship up with the characters and emotionally investing yourself into the game.

There are few games that use meta elements so effectively, and after the finale, so heartbreakingly, as well as this. Complemented with an awesome soundtrack, great art, expressive voice acting, and a perfectly fine translation, the story and its characters will have no issue garnering your interest. YOU and ME and HER: A Love Story is a must-play visual novel for even the modest fan of this genre.