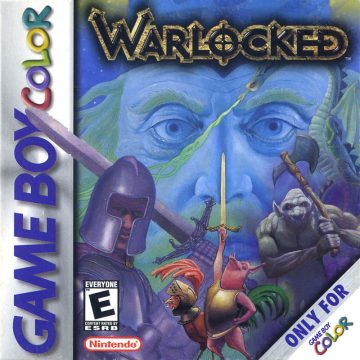 Publishers can make a huge difference in terms of software quality. Back in the ’90s, LJN and Sony Imagesoft were never renowned for their excellent titles, while big names like Nintendo were known for demanding the best from their first and second party teams. British developer Bits Studios became familiar with both ends of the spectrum. While they did develop the popular R-Type Game Boy ports early on, most of their first decade in console development resulted in garbage from Last Action Hero to the Itchy & Scratchy Game. Bits attempted an unsuccessful shift into the PC market in 1996 before Nintendo of America worked out a publishing deal with the team.

The first game published was R-Type DX in 1999, an enhanced re-release of the aforementioned R-Type ports for the Game Boy Color. That same year, Nintendo announced Riqa, a straightforward Tomb Raider clone by Bits. With a playable demo available at E3 alongside big-name titles like Perfect Dark, Eternal Darkness, and Jet Force Gemini, little attention was given to the more derivative game. After multiple delays throughout the next year and with the GameCube on the horizon, Riqa was canceled.

During this time, Bits developed Warlocked for the Game Boy Color and Nintendo published it exclusively in North America on July 24, 2000. Warlocked is also a pretty obvious rip-off of an established franchise, this time liberally stealing from the popular Warcraft real-time strategy series. If the title doesn’t give it away, the orc and human fighting on the cover should.

Like it’s inspiration, players can choose between two factions: the humans and the beasts. Both campaigns largely play the same, but each comes with a unique set of levels. While you can select either at the start, the beast campaign is noticeably more difficult and features an abridged tutorial, making it seem that the developers intended on the players starting as a human.

Anyone familiar with any RTS from the mid-’90s will instantly understand Warlocked. The player controls a mouse icon that can select units and give them instructions. Players start most levels with a home base and resource-gathering grunts that collect gold and lumber. Once enough materials are attained, these pawns can then create structures. Players are limited to three buildings: barracks, farms, and guard towers. Barracks create warriors and archers, more farms are needed to raise your maximum unit count, and guard towers shoot arrows at any enemies who approach them. A fog of war covers the land, and units must explore areas in order to uncover the map. If your base is destroyed at any point in the game, you automatically lose the level. It’s probable that the developers understood how generic their approach really was, so they added many elements to spice things up.

Each level features a hidden wizard, normally guarded by many enemy forces. Any captured wizards will remain in your army and can be stored or conjured using the magic stone building near your base. They are a precious commodity as death is permanent for them, but replaying campaigns allows you to amass a large amount of wizards that can be taken into multiplayer battles. All have a unique ability, and different combinations can greatly alter your approach to battle. Each comes with a short character bio. While there is a lot of overlap among the game’s almost thirty wizards, there’s enough variety that a handful stick out.

The queen leads the humans against the beast threat, although you obtain her about halfway through the human campaign. Her presence on the battlefield expedites the training process for all human soldiers and archers.

The leader of the beasts. His ultimate goal is to marry Queen Azarel, presumably so he can become the king of all the land. His presence on the battlefield is identical to the queens, speeding up the training beast warriors and skeleton archers.

One of the more useful wizards, the Poxwiz uses infectious magic to spread the fatal Blobby pox. This turns the enemy green for a few moments before they explode, spreading the disease to other units nearby who then spread it further.

Originally intended to be a roast at Azarel’s banquet, Pigwiz escaped and joined Chief Zog’s forces. Pigwiz can turn enemies into his namesake animal. Queen Azarel’s side gets the Chickenwiz, a similar wizard who turns foes into chickens.

Stealthwiz might be the most useful depending on your strategy. This wizard can render units invisible to foes, making exploration very easy.

Aside from wizards, dragons can also be recruited. Some levels contain dragon nests, all of which have an egg. When a unit approaches the egg, it hatches and a baby dragon appears. By returning the baby to your home base, it will quickly mature into a full-fledged dragon. Dragons become an offensive juggernaut, only harmed by wizards and archers. Unless there are five archers or multiple guard towers in the area, the dragons will take very minimal damage, blazing through the countryside at a rapid pace and laying waste to everything. Most levels will often feature many strategically placed enemy archers and guard towers to combat any dragons you might have, making it wise to bring along dummy units when going into battle. Occasionally, enemy dragons will also block your path, making it necessary to construct massive archer armies or attack using another dragon.

Despite all of these options, most levels in Warlocked have traditional RTS objectives: kill all opposition or destroy their base. Occasionally there are wizard rescue missions, but the biggest deviation are the strange stealth missions. For each campaign, a mission pops up in which you control one or two workers who needs to sneak around and activate traps to kill foes. Eventually, the offensive-deficient units find a wizard who can single-handedly maul their way to the levels conclusion. These stages can be frustrating in that your initial workers are killed in two or three attacks, but any kind of variety helps to keep things fresh.

Throughout the single-player campaign maps, scrolls are littered about that give helpful hints and unlock new features, the most important being multiplayer maps. Much of the single-player levels are about destroying enemy spawners and then tackling their base, but as is the case in all RTS games, human players are much more devious. Skilled use of wizards and dragons lead to much more dynamic and drawn-out assaults. Mini-games can also be obtained through scrolls, including a poker game and sliding puzzles.

While these innovations all keep Warlocked from growing dull, it remains a flawed experience. Generic mechanics aside, the game runs too slow, the AI is easily exploited, and there’s too much overlap between the wizards’ abilities. Still, on the humble Game Boy Color, the game plays like a technological achievement. It might not trump or expand on the antiquated Dune II, but at it’s best, Warlocked equals it.

The development team was pretty threadbare. Programmer Steven Clark was one of Bits main programmers throughout their life, working on everything from the early Last Action Hero titles to their final production, a game adaptation of the film Constantine. Graphic artist/game designer Martin Wheeler did graphics for a variety of projects throughout the ’80s and ’90s, but his only other design credit is 1984’s 8-bit computer classic Sorcery.

Veteran music/sound programmer Jeroen Tel adds a lot to the proceedings. Starting out in the C64 demo scene, Tel programmed sound and music in a massive amount of PC and console games, though Warlocked was the only game he worked on for Bits Studios. His work here is above average medieval battle fare with the occasional epic chiptune rocker. The whole soundtrack reflects a lot of his C64 output, especially with the extensive use of arpeggio effects.

The game was not a huge success, although it did receive quite a bit of good press. IGN awarded the game Best Strategy Game Boy Game of 2000, although there obviously wasn’t a whole lot of competition for the honor. A Nintendojo reviewer went so far as to say it was the best Game Boy title ever, a hyperbolic claim that probably reflects general enthusiasm for a portable RTS than the game’s actual quality.

At the turn of the millennium, Nintendo of America dropped many of its second-party developers. Bits was one of them, and they tried to develop a sequel to Warlocked called Wizards. Scheduled for a 2003 release, Bits failed to land a publisher. There’s many screenshots and a full teaser video available on the company’s defunct website. This show’s a faster game that shifts from the typical RTS mold, including brisk action and boulder traps. Their site also discusses the inclusion of side-quests, branching map paths, and more multiplayer modes. Wizzball sounds particularly interesting, although no details are given as to the mode’s gameplay.

The company did find publishers for their PS2 and Xbox works. Die Hard Vendetta and aforementioned Constantine were two later works, while Rogue Ops is rumored to borrow heavily from the cancelled Riqa. None of these were well-received, and Bits was sold off in 2008 by its parent company.

Bits is an unfortunate story. Considering their most remembered game is a handheld port of R-Type, it’s disappointing that they went a decade and a half without publishing much of note. Warlocked is a very good game, but it’s not enough to build an entire legacy on. Perhaps Wizards could have been a classic, but it’s doubtful that much work was done past a short playable demo to shop around. As it stands, Bits ultimately created a great Game Boy Color exclusive, a feat in and of itself.