In Retro Game Super Translation Selection, there’s a section explaining the famous “You spoony bard!” quote from Final Fantasy IV, meant to explain this goofy line to Japanese speakers. In the original Japanese version of this book, there was an offhand mention that it’s sort of the equivalent to Golbez’s line “Ii desu tomo”. This is a strange saying, especially considering it was like this in native Japanese and wasn’t a mistranslation…but at the same time, it’s become sort of a beloved in-joke among the Japanese Final Fantasy audience, to the point where it’s become Golbez’s catchphrase in subsequent spin-off games.

For context – near the end of Final Fantasy IV, Golbez and FuSoYa team up to fight Zemus. During the battle, FuSoYa yells to cast Meteo on the enemy, and Golbez replies with “Ii desu tomo!” (“いいですとも！”) Translated literally, it means something like “Okay!” This manner of speech is so polite, though, that it sounds extremely odd coming from such a villainous character, who otherwise talks in the very stereotypically pompous manner of so many JRPG bad guys. This was translated in the SNES version as “I’m Ready!”, in the PSP version as “Ready”, and in the DS release and Dissidia as “Very Well.” Obviously, this oddness doesn’t come through in English. Perhaps translating it to sound like an enthusiastic teenager – “Yeah, okay!” – would have preserved that unusual-sounding sentiment. 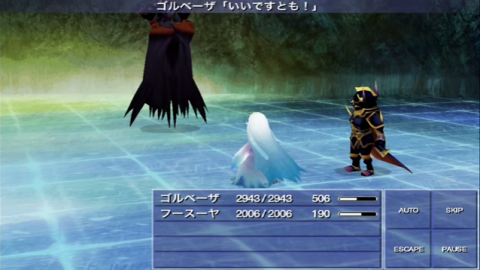 Obviously, though, this was a mistake on the Square’s part, as it wasn’t in the original script. Instead, it was added by Hiroyuki Ito, the battle programmer, who just inserted some quick text during this event, not realizing how Golbez was supposed to speak. But, as with the “spoony bard” quote, every subsequent version keeps this text, because it’d be sacrilegious to remove. 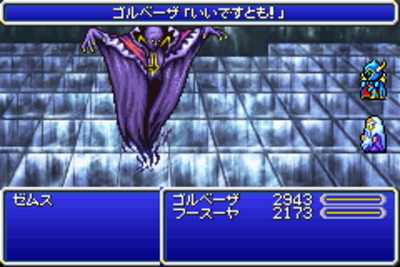