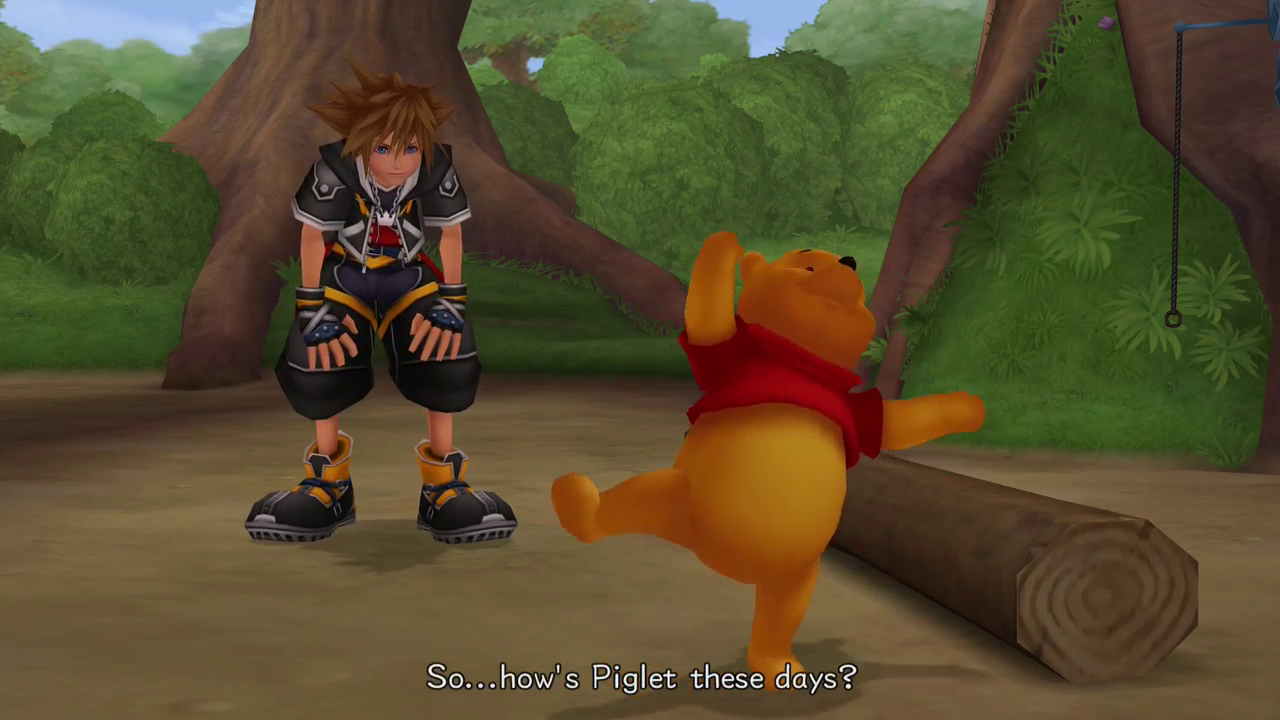 Kingdom Hearts II‘s opening hours are another of those infamous and confusing Kingdom Hearts moments, which makes it hard to summarize the game’s plot! The player finds themselves in control of a new guy, Roxas, who will be keeping them company for the next 2-3 (often surreal)hours, all without explanation. This unusual stretch of minigames and gimmick combat has left many a player scratching their head, but things eventually and dramatically return to the usual cast. There, Sora will continue his conflict with the Organization, now dubbed “Organization XIII,” and their minions, the “Nobodies” (another bit of English wordplay retained in Japanese).  Meanwhile, Riku has gone missing, Maleficent is back on the march, and there are a whole new set of Disney stories for you to experience. 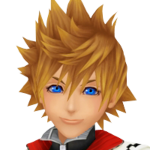 While there’s nothing suspicious about Roxas when you first meet him, genre norms suggest something strange is afoot.  The full answer will arguably take two games to tell, but for now, the player will be left wondering about this spiky-haired stranger. 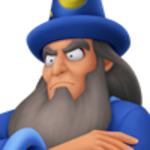 Mickey’s wizard master from Fantasia, and Kingdom Hearts‘ central voice of exposition. Yes, his name is just “Disney” spelled backward, and yes, that was his behind-the-scenes name even during the production of Fantasia! 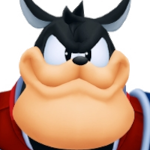 Mickey Mouse’s long-time rival has turned comic-relief stooge for Maleficent, and will trade barbs and blows with you several times during the series. Like the other members of the Disney core cast, he’s static but perpetually entertaining. 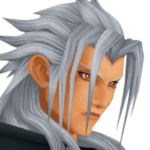 The head of Organization XIII, Xemnas is the “Nobody” of the same guy who became Ansem, Seeker of Darkness. Once again, he’s up to no good. 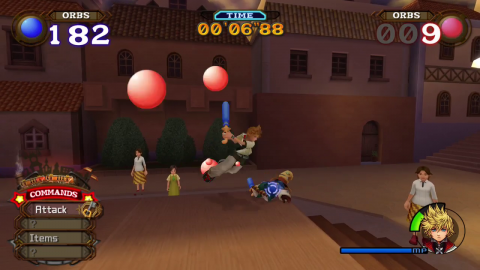 The first thing you’ll notice after Kingdom Hearts 2‘s opening cinematic is the gorgeous animation, especially close-up facial animation. Throw in all the interface improvements from the original Kingdom Hearts (less obvious in HD, but a big deal at the time), and it’s hard to understate just how much improvement was shoved into the first five minutes alone. And it’s not often where you can just sit and praise a game’s menus, but Kingdom Hearts II is one of those times. Few series have had such a sudden leap forward.

The second thing you’ll notice, after you get control, is that Roxas and Sora shoot off like a rocket compared to the original: this game is much, much faster than the original Kingdom Hearts, at the cost of tactical depth, maybe, but so much more fluid and natural.  Combat is smooth as it could be. Your character flies from one baddie to the next, and when enemies attack, many of them open themselves up to special “Reaction Commands” that you can hit using Triangle. Sora also builds up an impressive library of alternate attacks that he can equip in the Abilities menu, and even if you don’t experiment to find which are worth your time and effort, you’ll be blowing through enemies in style in no time.

While Square hasn’t quite solved the problem of allies wasting their items, ally AI is generally improved as well.  The player has direct control over how often the AI will use each of their special attacks, and your Cure spells now heal everyone in a radius, so they’re on their feet more often, and you never have to worry about “rescuing” them in a pinch. 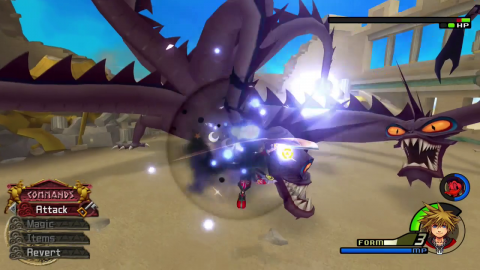 Magic has undergone a renovation: after you zero your MP meter, the game will slowly recharge it, forcing you to survive without until you’re back at full power. The fulcrum of this change is the Cure spell: you can use this to save your bacon with even a single point of MP, but it will instantly drain your remaining meter and force you into recharge! Unfortunately, magic is otherwise weaker in this game, except Cure and the game-breaking Reflect.  Summons also return, and are a bit better, like Stitch from Lilo and Stitch, who recharges your MP meter, or Chicken Little (a mostly-forgotten Disney character making a contemporary promo appearance), who fights as a powerful ally. Sora also has access to special Limits with his various allies, including each Summon.

There’s also the game’s complex Drive Form system. Using Drive Forms, Sora can temporarily transform into a form with alternate attacks and rules, some more powerful than others. You can power-up each form by performing certain tasks while transformed. For example, the fast-attacking Valor Form wants you to land a certain number of attacks, while the magic-focused Wisdom Form wants you to defeat piles of Heartless.  Upgrading the form also lets you keep its mobility powers in Sora’s regular self, jumping higher and dodging faster.  But if you overuse your forms, you may end up in the punishment Dark Form. It’s weak, but can attack rapidly, putting enemies into stunlock and hopefully saving your bacon.

If it’s starting to sound like Sora might be a little overpowered, well, that’s because he is.  Kingdom Hearts II is far easier than the first game. You might very well find yourself winning major fights with eyes and ears off the TV.  Thankfully, this problem is mostly restricted to minor enemies, especially the Heartless, leaving bosses and the more difficult and tactical Nobodies putting up more of a challenge.  Thankfully, this was largely corrected by one of biggest changes in the Final Mix release, but that’s for later.  The game is also guilty of bad QTE sequences, as was common in the era. 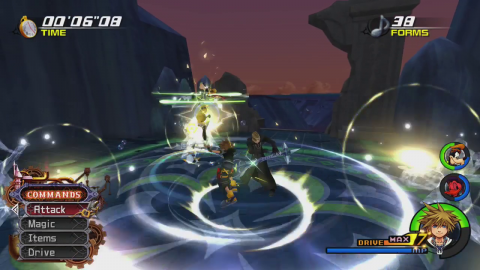 Once again, Sora is going to gallivanting across several Disney worlds.  A handful of these are returning from Kingdom Hearts, but have unique sequel plots, including a loose adaptation of Aladdin’s direct-to-VHS sequel, The Return of Jafar.  This time, the wildest gameplay comes from the Lion King world, where Sora is transformed into a lion cub with alternate attacks and blistering ground speed, but no access to his many alternate powers.  There are even more stylistic standouts. A Pirates of the Caribbean world experiments with throwing Sora into a “realistic” world (“realistic” for the PS2), while one special world throws Sora into the world of low-resolution, black and white Mickey Mouse shorts, complete with mono sound and new, 1930s-styled character models.

Unfortunately, starting with Kingdom Hearts 2, the series starts to abandon the detailed, Metroid-style puzzles and environments and starts to replace them with dull hallways and arenas with Disney paint.  Fans chide this sort of design as “flat,” since verticality is the biggest problem, and one that carried on to Birth by Sleep. Worlds also lack a mechanical identity. A few give it a shot, like the interactive deathtraps in the Nightmare Before Christmas revisit, or the “Morale Meter” in the Mulan world, representing trainee Mulan’s inexperience, but they’re few and far between.  One of the game’s more divisive decisions was to make it so the player actually has to revisit each Disney world after completing the first loop. This second loop is shorter and serves the central plot better than the shallow original loop, but that doesn’t take away from the sense of senseless repetition.

Minigames are more common in Kingdom Hearts II, with things like Santa Claus’ gift-firing cannon in the Nightmare Before Christmas world, but most of them are clustered in the returning Winnie the Pooh world and the Little Mermaid world. The Little Mermaid world has to be seen and heard to be believed. Not only does it restart the Little Mermaid plot from scratch as though the first Kingdom Hearts never happened, but the entire story plays out as a series of rhythm games as your characters sing along. Some of these are set to legitimate Disney songs, something Kingdom Hearts had never done before, and Ariel and Ursula’s voice actors return to reprise their singing roles (even though Ursula sings a new song, and not her famous “Poor, Unfortunate Souls”), but other songs aren’t so lucky. The new songs are amateurish at best and dreck at worst, with Sora, Donald and Goofy’s voice actors doing untrained singing, and Donald through that kazoo voice of his.  Worth at least one watch, but please never inflict it on yourself again. 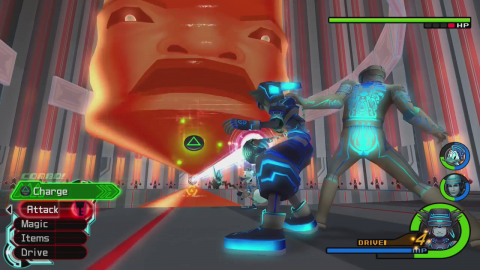 Gummi Mode also returns, but is much improved. The customizer isn’t just better, but allows you to stack weapons inside of other gummi blocks, greatly improving the look of the end product.  The flights themselves pull inspiration from Star Fox 64 and Panzer Dragoon, and the environments and enemy designs are great. Memorable moments include a battle against a pirate ghost ship, flying through the legs of a giant Heartless stomping through an Organization mining operation, and the assault on the Organization fleet at the end of the game.  There’s even a hidden bonus boss straight out of a bullet hell shooter. Even better, its mandatory segments are easy and quickly out of your way if you aren’t interested in them, which was probably best.

Once again, Kingdom Hearts 2 offers a range of late-game options, mostly centered on the recurring Hercules world and its arena.  This eventually reaches a tournament outright labelled “Level 99,” and requiring the player max out their Drives and Summons. These prerequisites are easier than they sounds in Vanilla, but only thanks to exploits, and those were removed in the Final Mix release. Sephiroth also returns as a bonus boss, though he isn’t as unforgiving this time around.

Kingdom Hearts 2‘s Final Mix release, which it dubs Final Mix+ (maybe in reference to the included copy of Re:Chain of Memories), does all the usuals. There’s a new paint job for Emblem Heartless, and a garish set at that. The remake introduces nearly forty minutes of new cutscenes, a handful of which foreshadow upcoming games, but most fill in poorly-explained scenes from the original vanilla plot, which was barely holding together.  But the biggest change for returning players is the new “Critical Mode” difficulty level.  This mode is a radical rebalancing that makes it much, much easier to die, but also rebalances enemies instead of just making them stronger. It revives a lot of Kingdom Hearts 1‘s lost strategy and tactics.  Unfortunately, the changes mostly affect the early game, and by end game, combat with minor enemies becomes almost as empty as Standard mode. Still, the experience is recommended for anyone who would normally play on “Hard,” since the actual hard mode increases enemy HP bars to the point where it slows the game down. 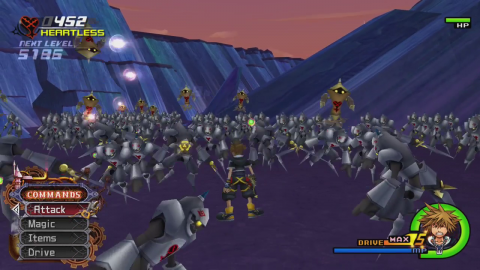 Final Mix+‘s changes don’t stop there. There’s a new Drive Form, and a fight that was all-cinematic in the original is now for real. Collectables were added that require Drive mobility upgrades. The player is given the chance to refight Chain of Memory‘s Organization members, and the puzzle enemies from Kingdom Hearts Final Mix are reintroduced with the goofy “Mushroom XIII”. The mode also introduces plenty of late-game challenges.  They added a new dungeon, basically the size of a plot-free Disney world, which has far more exploration than any other world in this “flat” game. At the end, the player unlocks refights with all thirteen members of the Organization, tweaked up to an even higher difficulty and ready to crush a Level 99 player.  After beating the game, the player can also fight the series’ newest Unknown. Final Mix+ also includes a much-improved version of the teaser trailer included in the original release, but it’s not easy to unlock!

Unlike the first Kingdom Hearts, Kingdom Hearts II saw almost no changes in the move to HD. That said, the PS3 release of the Kingdom Hearts II.5 HD collection was a bit faulty, supposedly a consequence of system loading times.  Not only does this cause the game to stall every time Sora engages a Drive or Summon, but it breaks the final boss’ Reaction Commands. The only way to fight him fair is to avoid this version in favor of the PS4/Xbox One/PC ports which fixed the problem purely through boosted hardware specs. 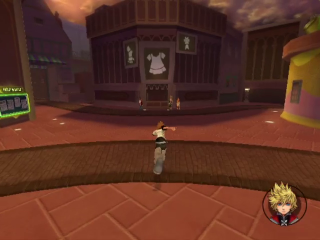 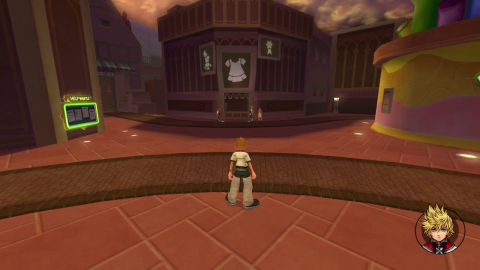 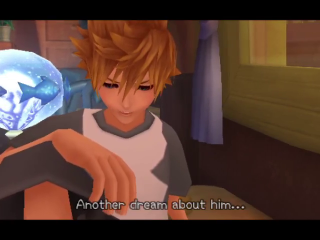 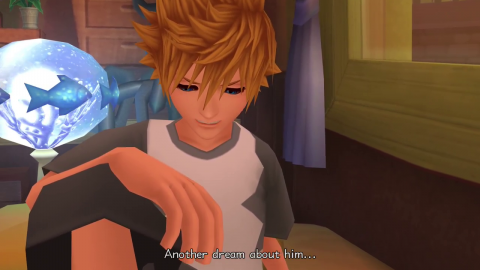