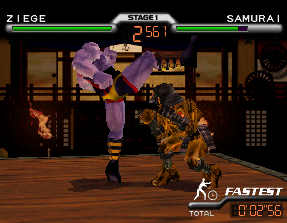 The sequel to Fighters’ Destiny, which curiously drops the possessive apostrophe, remixes several of the entrants, shuffles around a few of their move commands and overhauls the Master Challenge, but otherwise the points system remains unchanged and as excellent as before. It still lacks a proper story mode, but there are now 16 characters instead of 14, and it’s instantly apparent they’ve improved the visuals. There’s more polygons in the character models allowing for greater detail, better texturing, more background details and animation, and it runs smoother too. Whereas Ryuji/Saeki’s stage in the first game was rather plain looking, with statues and a red hue, in the second it’s bathed by a hundred burning lanterns and looks incredible. 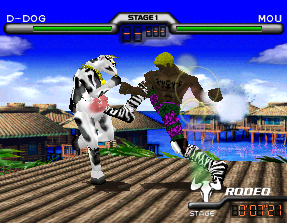 The biggest change is that instead of the Master Challenge there’s the Fighter’s Arena. You pick a character and, using a number dial instead of dice, move around a giant board game Mario Party style. Each square houses one of the game’s regular characters, while at key points stands the Master who, if beaten, will grant you a new skill. Instead of the Joker there’s the drag queen Cherry waiting at sections of the board, who will also sometimes haunt you on the number dial. The gimmick here is that every time you beat someone you also get a little stat boost, kind of like in an RPG, which should encourage you to play through all the smaller fights against minor characters and build up your character. It’s a clever idea in theory, but it just ends up annoying. Whereas the Master Challenge didn’t take too long, this takes bloody ages to get through. It’s not especially tough either, since Cherry is much easier than the Joker, and losing to minor characters only sends you back a single square. It’s just an excuse to fight random characters over and over. The Master Challenge in contrast was utterly thrilling – put it another way, what’s more exciting? Russian roulette or Monopoly? Exactly.

The worst change to the sequel though has to be that they took the original characters, who were all simple but pretty cool, and replaced several, making them gaudy and annoying. Same with the backgrounds. In fact despite the obvious improvements of the visuals, it’s not easy to recommend this one over the first, purely on stylistic grounds and loss of the Master Challenge. Its saving grace is that the underlying combat mechanics are the same, which is the main reason for playing the series. If you have one version of FD there’s little need to get the other (unless you really want the improved visuals and faster speed, in which case upgrade to the sequel). Even then the Master Challenge is probably worth getting the original for.

A name change can’t hide the fact this front Ryuji from the first game. He has one of the biggest move sets in the game and is a great starter character. Looks very different from the Saeki featured in the preview screens.

One of the new characters, she hails from Brazil and attempts to dance sexily before, during and after matches. Seemingly replaces Valerie, but isn’t as useful.

Same guy from the first game, though slightly beefed up and with a new stage set amongst what looks like Mongolian yurts.

Freaky mad scientist from Italy, Frederico plays a bit like a replacement for Leon from the first game. His background appears to be the same as Ziege’s, implying some kind of story connection.

A blond British bombshell, Kate is a very fast fighter. Seemingly replaces Boro from the first game, but isn’t a boss.

Even better than his counterpart in the first game. Has some good aerials and other moves, but most have complex button combinations.

Massive non-human character with an equally massive health bar. Replaces Tomahawk from the first game. Slow but when he connects he does some real damage.

He returns from the first game, albeit with a hideously garish new stage and costumes. Damned tricky to use as always, especially with connecting, and perhaps best not to use him at all.

A British punk rocker, Dixon is new to the series and hits pretty hard. Has some good counter moves.

Back from the first game and mostly unchanged. Meiling is fast, but be warned: she still doesn’t have any conventional throwing moves.

Another cow character, replacing Ushi from the first. Similar to before: complete the game with Adriana then survive for over a minute in Rodeo mode.

Just like Rob the training robot, albeit now much cooler looking and made from wood. Beat the game with Ninja then complete Faster mode in under a minute.

Has the biggest moveset – unsurprising since he teaches others new moves. Grades you after each match in Fighter’s Arena. Get only A and S ranks to unlock him.

This drag queen replaces the Joker from the first game. If you load up the Japanese version you’ll hear Cherry speak with a camp but unmistakably masculine voice – this was changed for the US release to something more feminine. Nowhere near as difficult as the Joker, and consequently not frightening.