Sega’s ESWAT, like many ’80s arcade games, spread from the desire to create a game based off of a movie without actually buying the license. In this case, it’s heavily influenced by the 1987 action classic RoboCop, whose arcade rights were owned by Data East (and actually pumped out a relatively decent title.) After all, who wouldn’t want to play as a robot shooting up criminals?

The game itself is patterned closely after Sega’s own Shinobi (which in turn was a vague ripoff of Namco’s Rolling Thunder.) The stages are all straight scrolling, with different levels you can hop between. While Shinobi was deliberately paced and methodical, forcing you to hide from enemies before launching a counterattack, ESWATencourages faster actions – you can take several hits before dying, and there aren’t as many places to take cover anyway. Your ammo is limited, forcing you to resort to kicking criminals if you run out, but it’s generally in rich supply. It’s also two player, so you can gun down criminals with a buddy. There are are a total fairly brief stages, each ending with a quick boss fight. The best stage is where you fight through Chinatown and have a showoff against a gigantic gorilla for some reason. 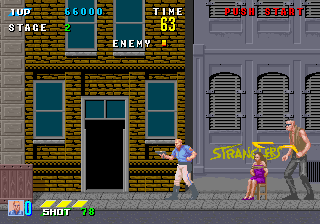 Alas, ESWAT never quite lives up to its potential. For starters, the robotic suit, at least in the arcade version, is rather bulky and silly looking. Sure, your character might be armed with machine guns, but ultimately it doesn’t look all that threatening. Plus, at the beginning and end of each round, the cops are transported by a tiny little police car – how does one, much less two of these things, fit into that thing? It’s like a circus act. There’s a bit of hilarity if you examine the diagrams of the suit in the intro – apparently the thing has a karaoke mic!

The second big issue is that you don’t even get to play in the robot suit in the first couple of stages. No, you begin playing as a regular boring cop guy. It’s only after completing two stages that you’re “promoted” into the cybersuit. That’s pretty cheap – lure kids in with that cool attract sequence and tell them, no, you have to get far enough (and pump enough quarters) in order to get to the cool parts? 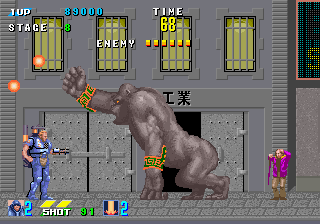 And when you get it, it’s not all that impressive. Sure, you have a machine gun instead of your regular pistol, which is nice. There are also a handful of special weapons that are in vastly limited quantities, which are fired from a cannon in the back of the suit. This also looks a bit silly, and it’s way too slow acting to be used effectively. But your life meter doesn’t even increase – you can take four hits before you die, with our without the suit. When you take damage, little bits of the suit fly off, exposing the human underneath, which at least looks kind of cool.

The concept is really the only halfway remarkable thing about the initial arcade release of ESWAT – otherwise, it’s just another middle-of-the-line arcade shooter. The sound is unremarkable and the graphics are dull, a rare smear on Sega’s usually sparkling track record.

The Master System port, only released in North America and Europe, is pretty bad. The graphics are worse than most first generation titles for the system, with tiny sprites and terrible animation. The bosses fall somewhere between being ridiculously designed or stupidly hard, often littering the screen with undodgeable projectiles. The levels are all brief and barely have any obstacles. The first two stages are more or less replications of the arcade game, but it goes in an entirely different direction from there. The game does get slightly better once you get the suit, due to the rapid fire gun, but it’s still poorly designed. This is also the only version of the game where you can actually lose your suit if you take enough damage. Unlike the other ports, you only have a single life, but a much longer life bar. The only positives? The suit actually looks a bit cooler in this version, much moreso than the doofy cover would let you believe, and in one stage, you get to fight a loin cloth bearing barbarian who looks like he wandered out of Golden Axe. 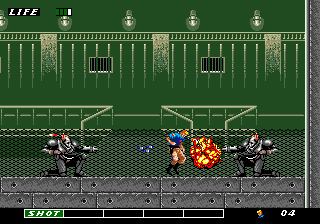 The Genesis version is also a completely different entry, almost to the point where it feels like a sequel. All of the levels and most of the bosses are brand new – the cyborg duo that shows near the end of the arcade game are now present in the second stage of the Genesis version, but that’s about the extent of it. The mechanic divorce itself from Shinobi even further, in that you can now take damage by touching an enemy, and there’s quite a bit more platforming. The levels are also much longer and more involved than the arcade game. You also have unlimited ammo for most of your weapons, but the two player mode has been ditched.

Similarly, the first two stages are played as a regular human cop, now given the name Duke Oda. By the third stage you finally get your cybersuit, and it’s substantially cooler this time around. You no longer have a machine gun as a default weapon, and instead you can collect a total of four extra weapons which can be switched between at any time. These include a machine gun, a plasma cannon, and a rocket launcher. Even cooler is the Burner, which allows you to fly around the screen and hover in mid-air. Its use is limited, but it regenerates slowly over time. It also moves just a bit too fast, so it’s pretty hard to control until you get used to it. The suit also allows you to take a few more hits, although the pieces no longer break off as you take damage. The FIRE special weapon also damages everything on the screen, but it can only be used once, and it completely drains your Burner meter.

The game technically isn’t too hard, but it does love to stick you into situations that are incredibly hard to get out of. Case in point: if you die, you lose whatever weapon you had equipped. Obviously, the best way to avoid this is to switch to your default weapon when your health is low, but if you forget…well, most of the enemies are placed under the assumption that you have at least one special weapon. The default gun is extremely slow and underpowered, potentially getting you into situations where you can get absolutely massacred. It’s also remarkably stingy with weapon drops, making it even tougher to dig yourself out of sticky situations. Similarly, sometimes it’s impossible to jump over projectiles unless you use your burner – and if you’re running low, that basically means the enemy gets in a free, cheap hit.

These aren’t exactly non-issues, but they are aggravating, considering the Genesis ESWAT would otherwise be an excellent game. Its graphics, while grainy compared to the arcade game, are generally better designed, with much more variety and style, and the boss theme is pretty cool. It’s not exactly Revenge of Shinobi, but it’s probably one of the better early Genesis action titles, and overall outclasses the arcade game it’s based on.

ESWAT was also released on several computer platforms courtesy of US Gold and Creative Materials, which are all relatively faithful to the arcade game. The Amiga one is the best looking of the bunch, although it’s rife with slowdown, with the Atari ST one looking just a bit worse, and the Amstrad CPC port a step down from that. The Commodore 64 port is okay, but the number of enemies has been cut drastically down, so it’s not quite as action packed, and the collision detection is a bit dodgy. The same goes for the Spectrum version, although its large sprites look awkward on the small screen. The Genesis version is also included on Sonic’s Ultimate Genesis Collection for the PlayStation 3 and Xbox 360, the Sega Genesis Classic Collection Gold Edition for Windows, and available on its own for the Wii Virtual Console.

The cybersuits from ESWAT (the Genesis variation with the Burners) also makes a cameo in the Dreamcast game Segagaga, 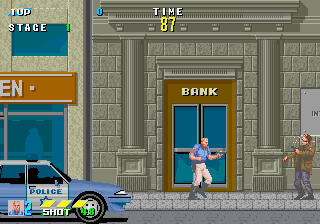 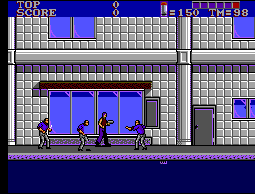 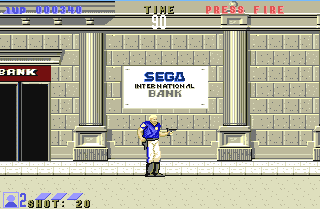 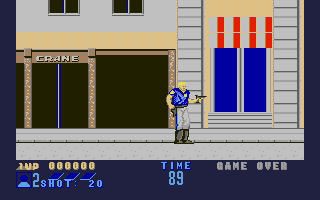 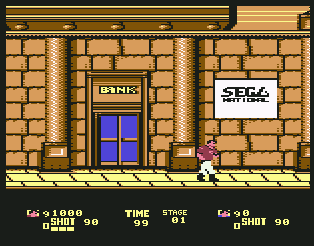 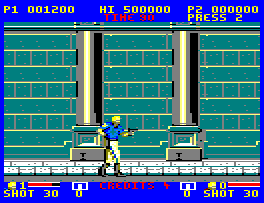 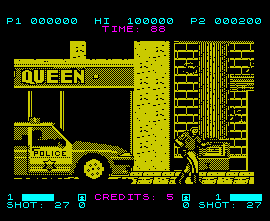