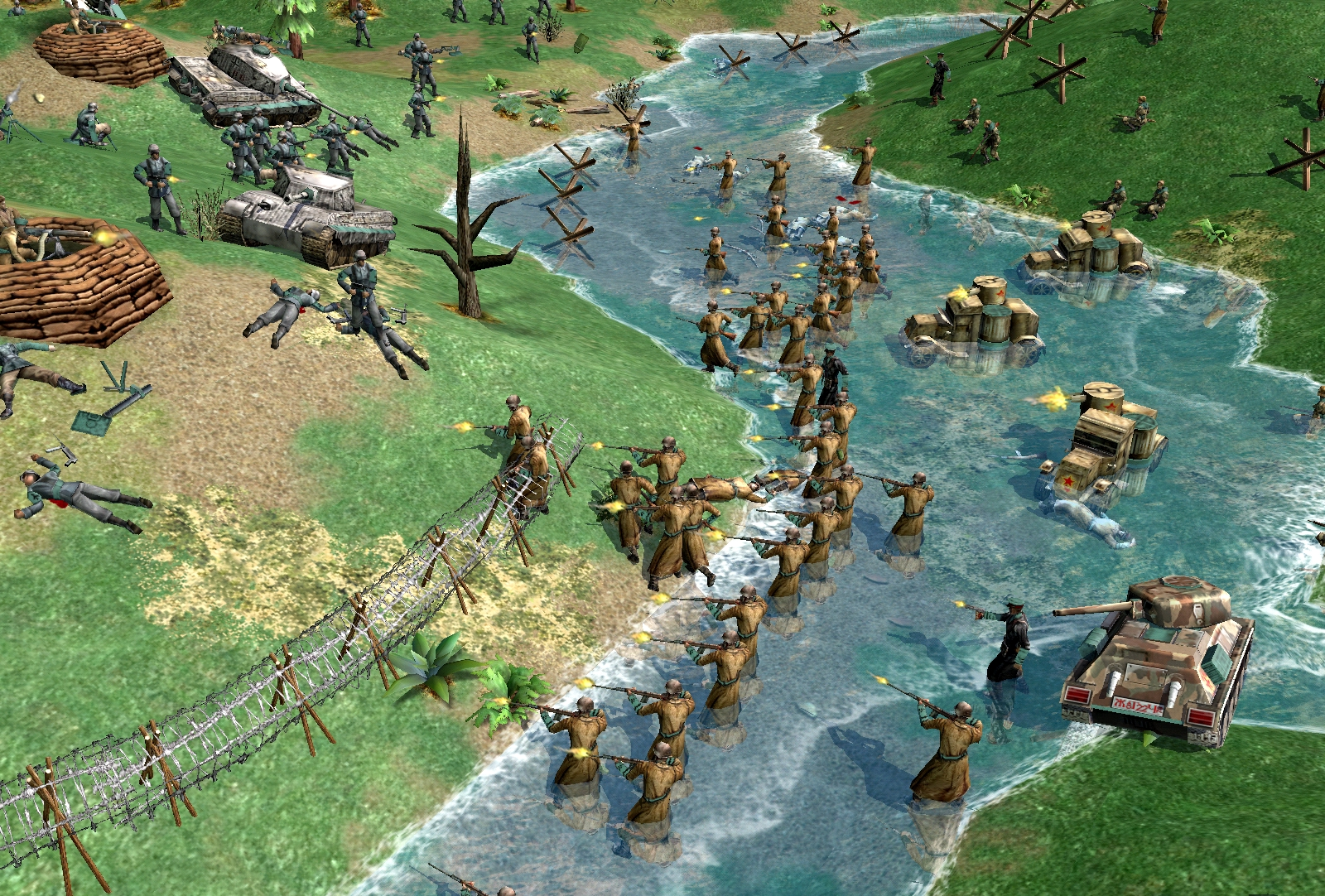 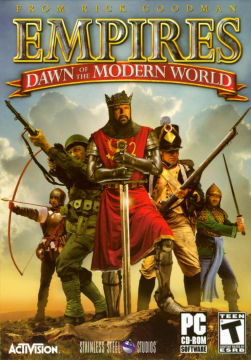 Rick Goodman, co-founder of Ensemble Studios and founder of Stainless Steel Studios, had struck gold with the original Empire Earth in 2001. It proved to be a critical and, at least for a time, commercial hit. Yet even then, neither he nor his fellow developers were satisfied.

As revealed in a Gamespot Q&A with Goodman in March 2003, Stainless Steel began work on its next project in 2002, surveying customers who had played Empire Earth. More than just seeing what worked and what didn’t, however, the input revealed a distinction between casual and hardcore gamers, as well as a demand for much more distinct civilizations, among other findings. On top of these, fans expressed how they liked playing from the Middle Ages to the Atomic-World War II Epochs, as opposed to earlier or more futuristic eras. Meeting those expectations, though, was a challenge, as it meant having to start practically from scratch. But as the man himself remarked, “I love history. I love strategy.” He wanted to have it both ways. 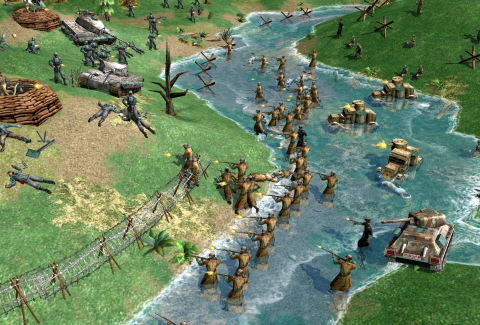 While this seemed easier said than down and the developers would never get a chance to make a proper sequel (entering a multiple-title publishing deal with Activision on December 2002), they nonetheless were able to finish a unique, proper spin-off to the franchise they kickstarted. That being Empires: Dawn of the Modern World, which was launched on October 21, 2003.

At a glance, Empires can come across like Empire Earth 1.5. With the exception of the Civ Points and Civilization Builder, many of the features and gameplay mechanics are seemingly lifted wholesale; that there’s a similar interface and even a “populating” mechanic for converting Settlements (which act like resource drop-off points) to full-fledged Town Centers don’t help matters. In fact, there’s not so much as a tutorial mode present, as though it’s assuming that you’ve either played the original game or are otherwise familiar with historical RTS titles. As it becomes apparent, however, looks can be deceiving.

Compared to the original Empire Earth, the game really sticks to its title in terms of timeframe. About 1,000 years’ worth of history, from the Middle Ages to the Second World War, is covered thorough five “Ages” (as opposed to 14 Epochs). While this might seem like a step down compared to the ambitious scope of its predecessor, it more than makes up in depth. The proverbial “Dawn of the Modern World’s” a time of tremendous change, which the game manages to convey rather faithfully as swords and arrows give way to muskets, machine guns and atomic weapons, making “Aging up” all the more vital. This also translates into a wide variety of action, with each era having enough of their own particular atmosphere to stand on their own. Whether you’re into knights in armor charging valiantly into the fray, Napoleonic style naval battles, biplanes fighting overhead or reenacting Blitzkrieg battles, there’s something for just about everyone. 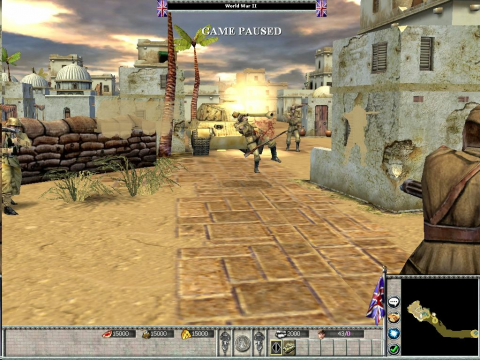 Empires features nine playable civilizations: England, the Franks, China, Korea, United Kingdom, United States, France, Russia and Germany. But unlike most historical RTS games at the time, every single one is made as distinct as possible in almost every aspect. While they share many buildings, each civ has its own aesthetic, very distinct unit rosters (with each side’s workers even having different names and appearances) and divergent perks. The Franks and French, for instance, are heavy on defense (being able to build observation posts and eventually construct pillboxes), while the Chinese have wheeled City Centers and War Carts that highlight a penchant for mobility. Each civilization also has access to Abilities and “Classified Projects” that are researched through a University. A rather curious take on unique tech trees based on historical or cultural traits, these can range from simple upgrades and one-off boosts (such as new ore deposits or temporary attack buffs), to powerful if expensive economic power-ups, reinforcements (like the UK’s “Lend-Lease” Ability) and even weaponized calamities (with Russia being able to “research” Tunguska Impacts) that can turn the tide of battle when used at the right time. And as an added twist, while only four are available from the very start – the English, Franks, China and Korea – they can transition into the remaining five upon “aging up” to World War I, depending on which one you choose; notably, only the English/UK and Franks/France have any sense of continuity throughout the course of a full-fledged match. Granted, it means that each nation is, by Goodman’s admission in the Gamespot Q&A, unbalanced on a unit-by-unit or economic basis. But on the whole, they add even more variety in playstyles and scenery.

Then, there’s the rest of the gameplay, which have seen further refinements from Empire Earth. For instance, the “incremental” progress mechanic (in which specific attributes of individual troops can be upgraded) is streamlined into awarding upgrades researched from an Armory (such as stronger armor or longer line-of-sight) that provide a sizable boost; although only one upgrade can be granted per unit type, the old customizability is retained. The aforementioned faction-unique Abilities and Classified Projects also provide a degree of unpredictability that forces you to both play on your own strengths and anticipate your enemies, further making each match less repetitive over time. While units are given greater variety and utility through secondary powers (passive or active), be it Korean ironclad Turtle Boats doublings as transports, German Neuer Soldats that can fire rechargable Panzerschrecks, or British Nurses that can “convert” dead foes by reviving them. Then there’s the way the two main modes – the faster-paced “Action” mode, with its emphasis on aggressive combat, and the longer “Empire Builder” mode, with its much larger focus on economy and defense – offer something for both pro gamers and newcomers alike without sacrificing balance. Combined with variable unit caps – which go all the way to 50,000, making epic-scale battles possible – similarly flexible AI difficulty, an intuitive multiplayer suite, maps for up to eight players and responsive controls, the overall experience is by and large solid. 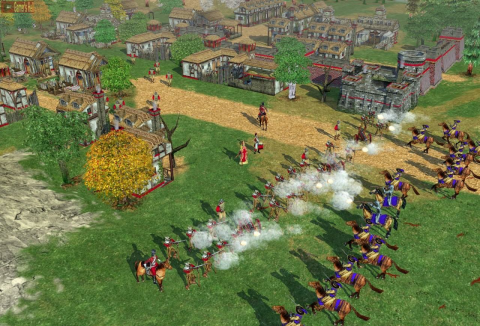 The campaign mode is another marked improvement, at least to a point. Comprised of three stories with a total of 22 scenarios (8 for the first and 7 each for the remainder), they chronicle the pivotal times of Richard the Lionheart, Admiral Yi Sun-shin of Korea and US General George S. Patton. Building upon the story-driven aspects of Empire Earth’s campaigns, each of these tales have something of a cinematic flair (thanks in part to much improved in-game cutscenes and camerawork) and possess a distinct tone, whether it’s the somewhat over-the-top war movie spectacle of Patton’s exploits as he dismantles airstrips with his pistol or the more personal stakes underpinning Richard’s efforts to secure the English throne from the French and his brother; that the game even manages to accurately convey the failed Japanese invasion of Korea through Yi’s eyes is notable in and of itself, bring relatively unfamiliar territory for Western games. The actual scenarios are tightly scripted, with myriad objectives, obstacles and surprise twists, along with unique structures and units (from Japanese Ashigaru troops to distinct North African buildings), though much of these are either enemies or window dressing. But while the variety present is decent enough (from hero-centric missions to large-scale offensives), without any really substantial incentives – wherein completing certain objectives can unlock additional Civ Points, with which to spend on further bonuses – there’s not much in the way of replayability after the first or second time. In addition, they don’t make the most of the 1,000-year timeframe – encompassing at best the Medieval Age, Gunpowder Age and World War 2 – nor many of the different civilizations, given the missed opportunities for featuring the Russians or Chinese in a more significant capacity. Coupled with line deliveries that are unintentionally cheesy (thanks in part to exaggerated accents for just about everyone), the end result isn’t quite an afterthought but still comes across somewhat lacking, polished as it may be.

The overall presentation is even more of a mixed back. On the one hand, the visuals are impressive even for 2003. Utilizing the Titan 2.0 graphics engine, Empires boasts much more detail, texture quality, animation and lighting (complete with day/night cycles) than its predecessor; unlike before, everything is fully rendered this time around, with the camera also able to rotate. Along with more flowing landscapes (further demonstrated by randomized maps) and small touches like roadways extending across your buildings or destroyed ships sinking to the bottom of the ocean, you’re treated to vibrant environments that still hold up well. On the other hand, the audio doesn’t quite succeed as well. While the soundtrack (composed by Scott Morgan) is suitably atmospheric and at times dynamic depending on the action, there’s nothing really memorable about the music tracks, which seem more like unused tracks from Empire Earth. And that’s not getting to the amateurish voice acting – especially evident in the atrocious French and German accents, to name a few – which though rather consistent with Stainless Steel’s previous work, may or may not be to your liking if only for how unintentionally hilarious it can get.

Which isn’t to ignore some of the smaller quibbles that hamper the game, somewhat. The AI, in particular, isn’t particularly clever unless it’s ramped up – at lower difficulty settings, it’s not unheard of for only small trickles of enemies to waltz into your territory, if they’re not trapped behind obstacles – and even then, playing single-player skirmishes can grow tiresome after a while. Alongside a few audio bugs (like artillery sounds that loop) and some clunky pathfinding issues, the peculiar balancing between the various factions isn’t perfect. As nations tend to be heavily biased towards particular playstyles than others, this can make learning curve for some civs like China trickier than others; this isn’t helped either by how only the Germans (through Missile Silos that can launch V2s) and Americans (through B-29 bombers) have access to atomic weapons, which can make them overpowered given the right circumstances.

Those being said, these didn’t stop Empires: Dawn of the Modern World from getting positive reviews from critics, with an 81% average on Metacritic and 82% rating on GameRankings. While some reviews (such as Game Informer and Computer Gaming World) chided the game for having an uninspired single-player campaign, pathfinding issues, and a superficially conventional RTS veneer, even these acknowledged the deep gameplay, unique factions and tightly knit action; it was even nominated for “Computer Strategy Game of the Year” in the 2004 Interactive Achievement Awards (now known as the DICE Awards) only to lose to Command and Conquer: Generals. The solid accolades was shared by gamers themselves, given how combined sales with Empire Earth surpassed 2.5 million units within seven months after launch. Indeed, by trading ambition and broad scope for depth, Empires in some respects even manages to succeed where Empire Earth 3 would fail miserably at four years later.

Unfortunately, he game’s time in the sun wouldn’t last long. On November 23, 2005, ex-employee Bob Scott revealed on fan site HeavenGames that the studio, despite high morale among developers as they worked on what became Rise and Fall: Civilizations at War (finished by Midway Games and released in 2006), had broken up. Whether it’s due to not selling as many units as hoped – this wasn’t helped by how other RTS titles like Rise of Nations and eventually, Age of Empires III were taking the spotlight – or Midway Games being at fault, as Goodman himself alleged in an interview by German outlet GameStar, it’s clear that any hopes for a follow-up were forever lost.

Thus, for over a decade it seemed as though, outside of pirated disks and second-hand copies, the game would fade away into oblivion. But since its re-release by GOG.com on May 11, 2017 (with online multiplayer possible through third party suites), it’s once again catching the attention of old Empire Earth fans and RTS newcomers alike. While the odds of a remake or a proper sequel remain distant, at least Goodman’s vision has not been forgotten.