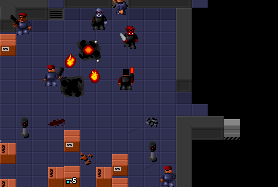 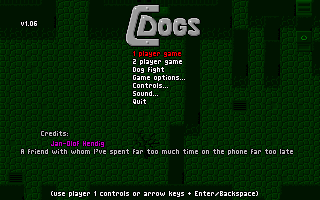 Shareware compilations were a common sight to PC gamers of the nineties: grab-bags of weird games that you might never have heard of otherwise (remember, kids, the internet was still a baby back then), usually riding on a demo of Duke Nukem 3D as its hot selling point. They were fun to explore, and you could always find something interesting if you browsed long enough, like Corncob 3D, Deadly Rooms of Death, and Male Strip Show. Yes, that last one is real.

Ronny Wester’s freeware game Cyberdogs was featured on a number of these compilations: a top-down shooter featuring lots of little pear-shaped dudes blasting the crap out of each other while collecting motherboards, floppy disks, and…teddy bears? You can choose one of three identical characters and play alone or with a friend via Toejam & Earl split-screen effect. There isn’t much of a plot besides “kill the bad guys and collect the objectives”, but you do get a spiffy outfitting screen where you can buy gear for your soldier. As a freeware game, you could do a lot worse. 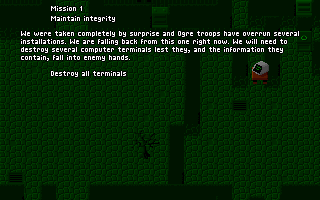 Cyberdogs started as a pet project, but Wester got the chance to have a homebrew game distributed by a proper retailer under the usual shareware redistribution terms. He reinvented Cyberdogs for 32-bit systems as C-Dogs, giving it a makeover and greatly expanding its features. Being the more refined of the two, C-Dogs is much more commonly found on abandonware sites these days, and it’s much more satisfying than the original in every way. Well, every way that doesn’t involve being a pear-man. Or pear-woman, if you prefer. 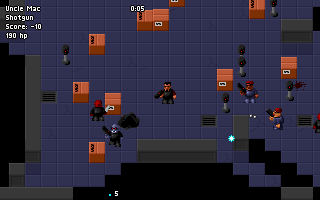 C-Dogs is the real deal, the hard-working grownup to the lazy child that was the original. Players can now blast their way through five campaign settings: stop an invasion of space orcs; stop an invasion of homicidal muppets; respond to a distress call from the USS Fetch Quest and shoot annoying scientists; blast a terrorist organization with an acronym straight out of an 80s cartoon; and re-enact House of the Dead with zombie pear-men. If that’s not enough, the game provides a campaign editor for making your own missions. Between each mission you get a briefing screen, a nice touch that adds a little immersion to an otherwise bare-bones blast-fest, and definitely adds to the game’s virtual shelf life. And now you can deathmatch a friend if you get bored with playing co-op. 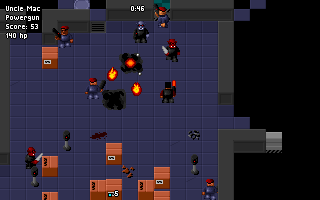 Characters selection is replaced by a cool customization interface, which instantly improves even the blandest of games. Give your pear-man whatever name your juvenile imagination can think of. Customize the head, hair color, skin color, and color of the arms, legs, and torso. It’s just too bad that the clothes and skin colors don’t match, preventing you from playing as a fat, naked action hero. 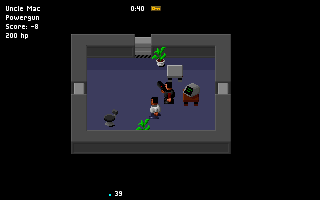 The gameplay for C-Dogs and its predecessor are identical. Move and shoot in eight directions while searching randomly-generated(?) dungeons for keys, monsters, and objectives, swimming through the fog of war all the while. This fog is the only source of tension in the game, and also a major source of irritation: if it’s not in your line of sight, it’s blackness. It does little to add to the challenge, since the enemies all graduated from the Legend of Zelda School of Enemy AI (move and attack in random directions until killed) and only occasionally notice your presence. At least you can destroy the furniture and non-hostile NPC’s to vent your boredom a little, but don’t waste too many shots because you use points as ammo. Unless score doesn’t matter to you. Which it probably doesn’t. 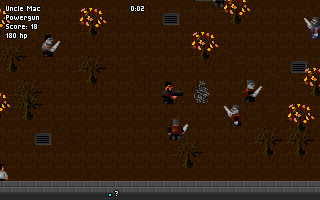 Regardless of the campaign setting, every mission feels like the same scavenger hunt in grandma’s blando basement, so the game can get old very quickly. Still, C-Dogs has a bit of a following on the internet, and the game is no stranger to Youtube. It’s worth checking out on a rainy day if you’re DOSBox-savvy and looking for something new to play. 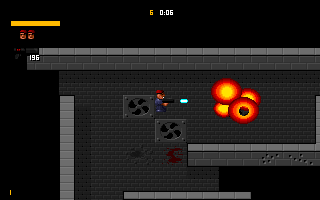 Or you could play it on your Android instead. In 2002, the source code was released, leading to the development of C-Dogs SDL, an open-source version of the game that adds new graphics and features, including 4-player multiplayer support. The game is hosted on Github and has been ported to numerous devices.