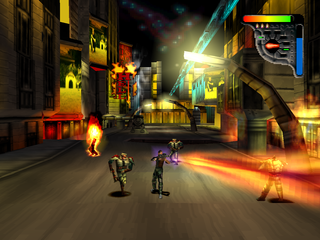 Celebrities in video games are nothing new, but you will usually see them in either movie or TV show tie-in games. It’s quite rare to see them starring in an original game, and Apocalypse for the PS1, starring Bruce Willis as made extremely evident on the packaging, is one of those few. The game was developed by Neversoft and published by Activision in 1998, during the height of Bruce’s fame. The game oozes the 90s at every turn and has an interesting development history.

Initially, Bruce Willis was supposed to be a side character, giving the game a feeling of a buddy cop movie. During the development, Activision signed a multi-million-dollar contract, with Willis to provide his voice and likeness. His role of sidekick Trey Kincaid eventually changed to that of the main character, but this resulted in him having reduced lines, and much of the dialog decreased during development. The lines were recorded in two days, and most of them that you hear are the type of cheesy one-liners found in action movies of the era. 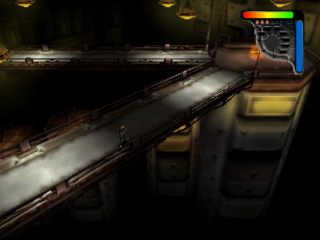 Apocalypse is a 3D top-down shooter, and fans of games like Smash TV or Total Carnage will feel right at home, as you moving with the left analog stick and shoot with the the right. In case you don’t have a Dual Shock controller, you move by pressing the directional pad and shoot in four directions by pressing Triangle, Circle, Cross, or Square. You cannot control the camera, which will turn on its own as you progress through (mostly linear levels), and at times you might be confused about where to go next. The shoulder buttons are used for jumping and crouching, and for changing weapons. There are some platforming sections, which generally aren’t too hard, but they can occasionally be unnecessarily difficult due to the camera angles.

The gameplay is fast, action-packed, and most importantly, quite a bit of fun. There are eight weapons, and you start with the machine gun (with infinite ammo), a flame thrower, grenade and rocket launcher, and several energy weapons. Some of the weapons have an auto-aim, such as the Particle Beam or the Homing Missile, that are useful for quickly dealing with waves of weaker enemies. In addition to this, you also have a Smart Bomb, a special and limited weapon, that will anything within its blast radius. You also have extra lives, and losing one will restart you at the nearest checkpoint. Naturally, if you run out of them, you will start the level all over again. 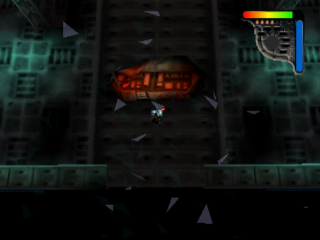 The plot of Apocalypse is a bit goofy, though it never loses that 90s over-the-top sense of action. It’s set on an alien colony where religion is the driving force, and science is considered evil thanks to the teaching of a figure called the Reverend. In actuality, Reverend is a great scientist and is using his teachings as to cover in order to end the world, by creating the Four Horsemen of the Apocalypse. To accomplish this, he orders his disciples to break into the laboratory of Trey Kincaid (Bruce Willis), a top scientist in nanotechnology. After stealing his research, Reverend locks up Trey, since he is the only man who can stop his mad plans. Even though Trey is a scientist and not an action hero, he’s still extremely capable in taking up arms to fight back.

You start by breaking out of the prison, then run through the sewers, enter into a the city, and so on. At the end of each level, there is a boss that you must fight, after which you will be greeted with the stats screen. Boss fights are distinguished and not too gimmicky, and the later ones can be quite challenging. After the end of each level, there is a CGI cutscene, which still look relatively decent considering the era. The graphics and animation are detailed, but the model of Bruce Willis is so low poly, that it barely resembles him. The large 3D levels are unique and have their own style and all of them have a sort of hellish twist to them, which ties it neatly into the whole apocalypse theme. The soundtrack even features artists such as System of a Down (who make an appearance in both music and video), and Poe, who also was cast as one of the characters. All of these things only add to the feeling of a big-budget movie. 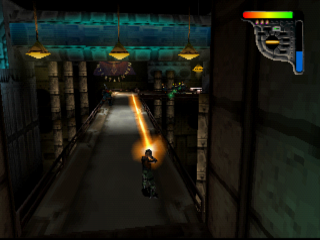 The game can be completed in about four hours, though it has three difficulty levels. Considering its an homage to arcade games, this is actually a pretty reasonable length, though perhaps disappointing for those seeking juicier experience. Sadly, the game wasn’t a commercial success, at least commensurate to its budget and star power, but it wasn’t a total failure. Neversoft actually reworked this engine for their next title, Tony Hawk’s Pro Skater, and some of its first playable demos were in fact of Trey Kincaid skateboarding in the Apocalypse levels.

It’s a little rough owing to the era it was released in, but Apocalypse is still a definitive recommendation. And compared to other PlayStation 3D action titles like C: The Contra Adventure and One, it holds up pretty well.  As Bruce would say: “Strap one on, it’s time to jam!”