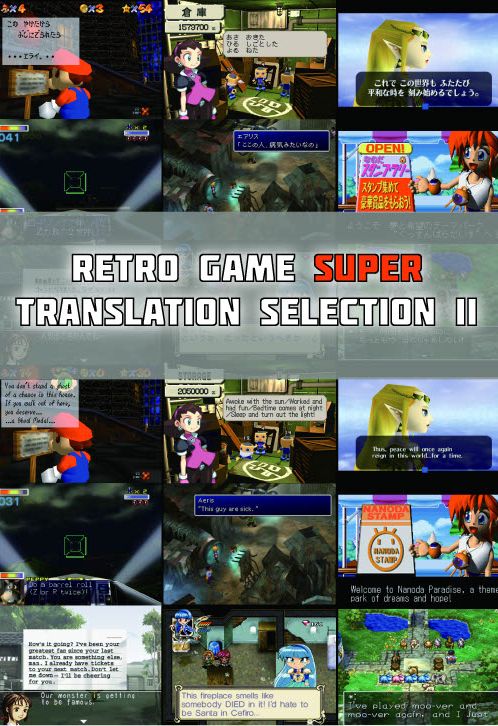 The Retro Game Super Translation Selection series is written by Hanenashi Error, who runs a website comparing differences in translations between Japanese and English localizations. He also has a Twitter account that showcases a lot of these changes. Back in 2017, he created a self-published book called Retro Game Super Translation Select, which HG101 then translated into English and re-published on Amazon (while changing the name slightly for grammatical reasons). A follow-up book was released in late 2019, which after a long delay, we’ve finally translated into English! Paperback copies are available on Amazon. Digital copies are available at itch.io plus the first volume is on sale for a limited time for 50% off! Both volumes are also available by donating $5 or more to the site’s Patreon, which also includes some of our most recent books, including the NES Endings Compendium Years 1985-1988, The Guide to Shoot-Em-Ups Vol. 2, and The Unofficial Guide to Shin Megami Tensei and Persona. 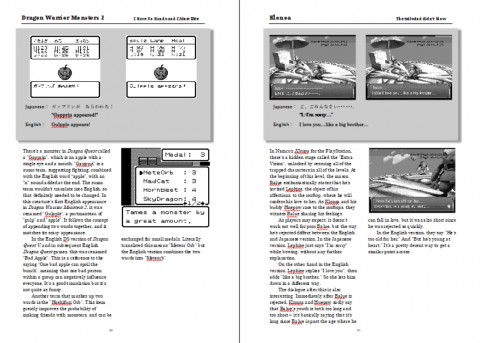 This series takes a look at something specific in a game – typically a line of dialogue, but sometimes a name – compares the two, and then offers some ideas about what might have changed in the trip from Japanese to English. Sometimes it’s an idiom that doesn’t translate, sometimes it was something that was rewritten slightly to make it read better in English, sometimes the English localizer tossed out the original Japanese entirely and wrote their own text, sometimes the Japanese text would’ve been considered inappropriate due to cultural differences, and so forth. The books are both about 100 pages long each, with a handful of columns with additional insights. The first book covers games from the 8 and 16-bit era, while the second book covers games from the 32/64-bit era, like the PlayStation, Saturn, and Nintendo 64, along with some Game Boy Color games.

I really enjoyed working on these because they highlight a lot of subtle things that are changed on their journey across the Pacific, as well as many of the challenges the localizers face. The second book in particular covers plenty of Working Designs games, and while they have a reputation for inserting some pretty dumb jokes in their work, their writing really does add a whole lot of character into what were otherwise some rather dry scripts. There are also a few instances of Western games being translated into Japanese, which is something you don’t really hear about that often, which are also incredibly interesting. The books were originally written for Japanese audiences, so some of the selections may seem obvious or redundant to Western video gamers, but I elected to include them anyway. I also added some extra context and explanation for things that wouldn’t be well known to English speakers, like some of the more infamous lines in the original Dragon Quest.

I also added a handful of extra pages near the end to include some games I knew English speakers in particular would be interested in, mostly RPGs like Final Fantasy Tactics, Breath of Fire III, Vagrant Story, Chrono Cross, Thousand Arms, and Rhapsody. To be honest, this was originally done because of Amazon’s requirement of a minimum of 100 pages to allow text on the spine – the first book just barely squeaked over that, while the original Japanese version of the second book wasn’t quite long enough, so I wrote some new pages to compensate. However, right as this book is being published, they reduced that requirement, so in the end, it wasn’t really necessary. But it does make for some interesting stuff, and I learned quite a bit myself as well.

Of course, in the process of localization, some things had to be changed for the English editions of the book as well! All of the sections have cute little subheaders that are typically a joke or a reference to something else, some of which were completely untranslateable for an English audience (again, either for linguistic reasons or for cultural things that wouldn’t be understood), so some of these were rewritten. I initially planned to have sections to detail these changes, but in the end, it felt too meta. So I apologize in advance, any of the references The Simpsons are all me! But I had fun with them, and I’m particularly proud of a few of them!

This whole project initially came about because I wanted to purchase a copy of the book for myself from Error-san, but ultimately we decided to work together and translate the whole book into English for an international audience. The English edition of the second book was delayed for quite a long time since the original Japanese edition was published in late 2019, right as I was beginning work on the enormous 652 page Guide to Japanese Role-Playing Games (which will also be out later in June from Bitmap Books) and just didn’t have the available time to work on it. But after that and some other long-awaited projects were completed, I was able to (finally) focus and complete the translation work. Apologies for taking so long!

Also, Error-san has written up a blog of a handful of entries that were cut from this volume. It’s currently still in Japanese, though I may translate it in the future.

Also, if you like books like this, make sure to check out Clyde “Tomato” Mandelin’s Legend of Localization books, which are deep dives in two specific games – The Legend of Zelda and Earthbound.