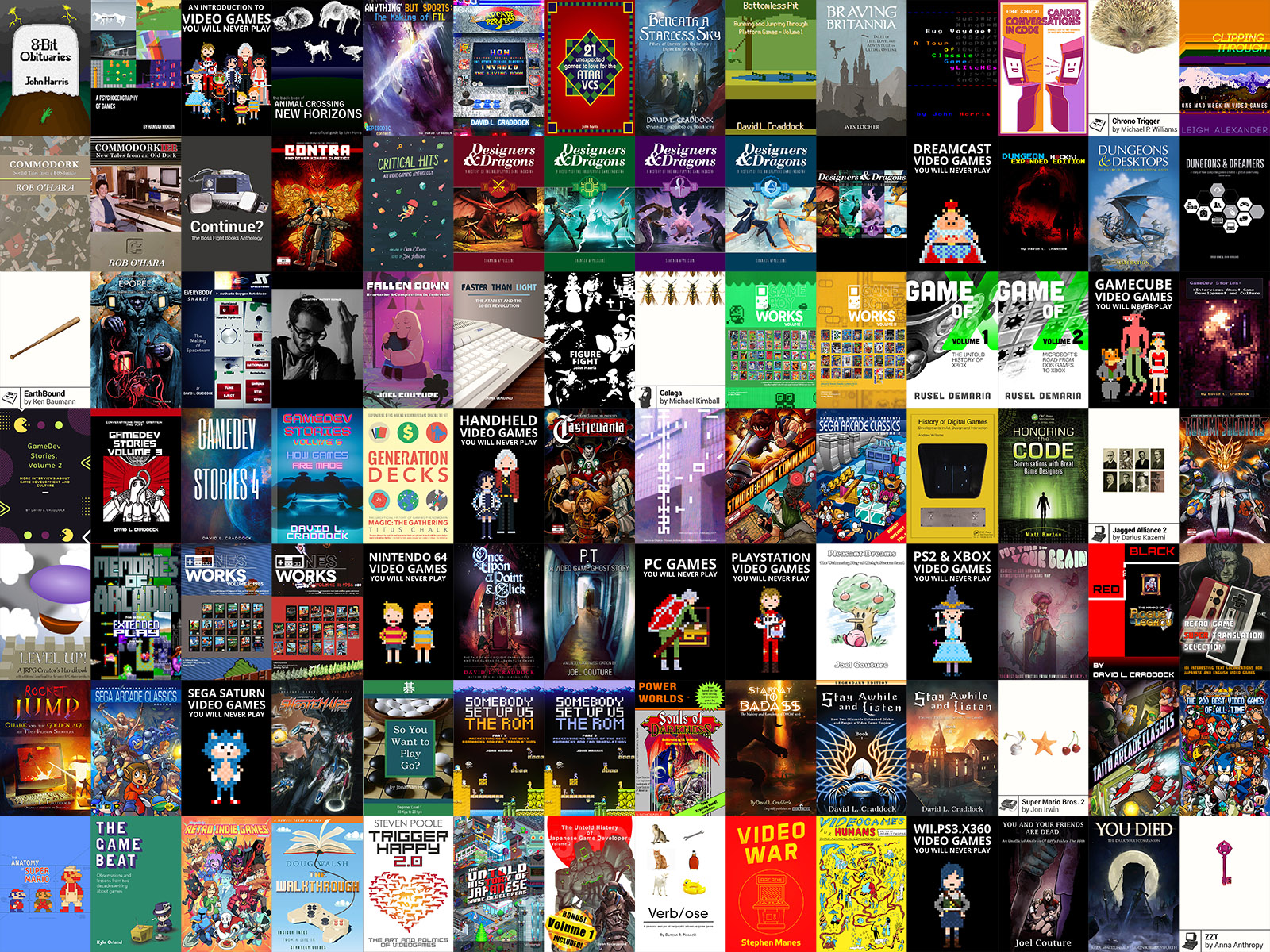 The latest Storybundle includes a whopping 95 video game-themed ebooks, including 13 of ours, for only $30! It’s an incredible value that works out to about 33 cents per book. Our included books are:

Any HG101 books not included in the Storybundle have been discounted at 20% at itch.io until December 25th, including two of the big releases for 2020, Wrestling with Pixels and The Unofficial Guide to Shin Megami Tensei and Persona.

Other works include six books from Boss Fight Books, the first two volumes of the Untold History of Japanese Game Developers, several books by Unseen64, and other books from the likes of Jeremy Parish, David Craddock. Joel Couture, John Harris, and many others!

The full press release is below!

Every new generation of gaming hardware brings a new crop of remastered, remade, and reimagined classics from yesteryear. In that spirit, the Greatest Hits Game Bundle celebrates the history of video game development and culture by collecting 95 of our best books from game bundles of the past in one massive, final boss-sized compilation—and your last chance to get these DRM-free tomes at unbeatable prices.

Don your adventurer’s cap and delve into Dungeons & Desktops with historian and professor Matt Barton. Join fellow historian Jeremy Parish as he revisits the turbulent beginnings of Nintendo’s breakout systems in volumes one and two of NES Works and Game Boy Works. Author, journalist, and game designer Leigh Alexander delivers a deeply personal account of the games industry in Clipping Through: One Mad Week in Video Games.

Venerable publisher Boss Fight Books delivers six of its critically acclaimed stories that weave personal histories into development sagas. Fight on the fields of Azeroth, through Hell, and up to the stars in David L. Craddock’s Stay Awhile and Listen: Book I and Book II, which explore the making of Blizzard Entertainment’s WarCraft and StarCraft franchises, and Blizzard North’s Diablo and Diablo II.

All that, plus veteran games reporter Kyle Orland’s anthology of articles and features, over a dozen of Hardcore Gaming 101’s retrospectives and rankings of the greatest games of all time, author and strategy guide writer Doug Walsh’s memoir of a career writing hint books for BradyGames and Prima, Rob O’Hara’s and Jamie Lendino’s histories of games developed for Commodore and Atari PCs, Unseen64’s complete library of games you’ve never played on consoles like Sega Saturn and PlayStation One, John Harris’s comprehensive guides to Animal Crossing: New Horizons and game hacks, collections of interviews with legendary game designers, and dozens more.

StoryBundle is a pay-what-you-want platform for independent authors to share their works with readers (and gamers) like you. Paying at least $5 will get you five books from the Greatest Hits Game Bundle, while paying $30 or more unlocks all 95 books. – David L. Craddock

This bundle is available only for a limited time via http://www.storybundle.com. It allows easy reading on computers, smartphones, and tablets as well as Kindle and other ereaders via file transfer, email, and other methods. You get multiple DRM-free formats (.epub, .mobi) for all books!

It’s also super easy to give the gift of reading with StoryBundle, thanks to our gift cards – which allow you to send someone a code that they can redeem for any future StoryBundle bundle – and timed delivery, which allows you to control exactly when your recipient will get the gift of StoryBundle.

StoryBundle was created to give a platform for independent authors to showcase their work, and a source of quality titles for thirsty readers. StoryBundle works with authors to create bundles of ebooks that can be purchased by readers at their desired price. Before starting StoryBundle, Founder Jason Chen covered technology and software as an editor for Gizmodo.com and Lifehacker.com.