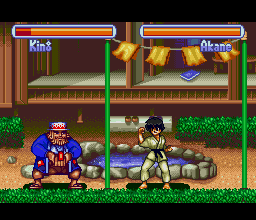 NCS’s second Ranma ½ fighter for the console, Hard Battle, was released in Japan the same year as its predecessor and features a few characters that aren’t in the other two 16-bit Ranma ½ fighters. Only male and female Ranma are available at first, but you can hold L and R while choosing your character to select the others. Since the manga and anime, publushed by Viz, were gaining popularity in the States, it was released mostly unaltered in America, with only major change being the inclusion of the English dub voices. 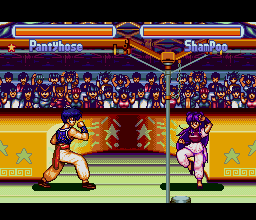 The plot of Hard Battle is pretty simple: Kouchou is trying to get every other character to fight, which somehow benefits him. Think of it as Mortal Kombat 2 with Shao Kahn wearing a Hawaiian shirt. Unfortunately, Hard Battleplays like Chōnai Gekitōhen, though it’s slightly improved. The improved hit detection and control responsiveness, as well as the superior visuals and sounds, make Hard Battle a less grating experience than its predecessor. The controls have been modified as well: blocking can be performed with L and R, or by simply holding back like in most fighters. X is still the default jump button, but thankfully, Hard Battle gives you the option to assign the jump command to Up on the D-pad. The A button, meanwhile, now does absolutely nothing. Specials are still performed with simplistic motions, but several specials involve button charging, which is not going to be very intuitive for most people. Disappointingly, it is no longer possible to change characters between fights, but there is an elimination match instead.