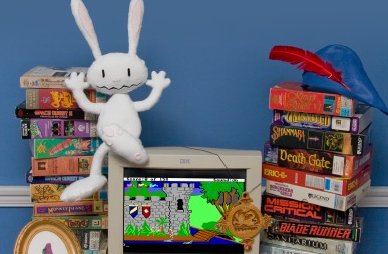 Hardcoregaming101.net Presents: The Guide to Classic Graphic Adventures is an ode to one of the oldest genres in electronic gaming. It is 772 pages in length, covers over 300 games and includes a number of interviews with classic game developers. It is an expansive tome, jam packed to the brim with history, criticism, and trivia. If you’ve ever asked the question “If I like LucasArts and Sierra games, what other games should I play?”, then this book should be your bible.

You can look at a preview PDF here.

Please note that when a title is listed, it includes all games in that series. For example, the Tex Murpy article includes reviews from Mean Streets, Martian Memorandum, Under a Killing Moon, The Pandora Directive, and Overseer. Titles not linked are currently exclusive to the book.

The cover was inspired by the “feelies” included in Infocom game packaging, which were nifty little physical goods based off something in the game. While the concept of feelies had died out around the time Sierra and LucasArts had taken over the market, I thought it would be cool to feature some homemade replications of various in-game items. These include a stuffed doll of Max from Sam & Max, the Schattenjaegar talisman from Gabriel Knight, King Graham’s hat from King’s Quest, a rubber-chicken-with-a-pulley-in-the-middle from The Secret of Monkey Island, and a cross stitch of Purple Tentacle from Maniac Mansion: Day of the Tentacle.

Initially I had just wanted to feature these goods, but decided to frame them in a photograph of an old PC monitor, surrounded by boxed copies of various classic games. It gave me good opportunity to show off some of my collection (which is much larger, but I couldn’t fit all of it) and was designed to elicit feelings of nostalgia from the days when Babbages’, Egghead Software, Software Etc. and Electronics Boutique were stocked to the brim with these things.

The back cover is a shrine to Roberta Williams, one of the founders of Sierra and creator of King’s Quest. It was sort of based on a joke from (I think) a Retronauts podcast, where they admitted that they thought Roberta Williams was pretty attractive. (She was featured partially nude on the cover of Softporn Adventure, after all.) I thought it would be interesting to create a shrine to her – I instructed my graphic designer to make it classy without being too creepy. Ms. Williams, if you see this, please note that it is meant with the greatest respect!

Yes, it’s not exactly cheap, but I’m confident that it’s entirely worth it. It’s an absolutely gigantic book, weighing over three pounds, and there’s a ridiculous amount of material that will keep any fan reading for hours on end. It will also graciously help support the site, and go towards the publication of future books. The Kindle version is cheaper, since it obviously doesn’t need to be printed.

What’s the difference between the articles in the book and what’s already on the site?

If you’ve read the reviews on the site, they are pretty much the same as the book, and follow a similar style and format. All of them have been copy edited to fix typos and improve readability, and a few have been cut down to fit, although they’re still largely the same as the version on the web site. (Not all of the revisions have currently been incorporated into the site.) There are also numerous titles that are currently only covered in the book. All games covered have a box shot and at least one screenshot, although note that the book is in black and white. Many reviews are extensive, however, there are also numerous shorter, single page reviews.

Will any of the articles currently exclusive to the book ever be posted on the site?

Some of them will be. The longer articles – King’s Quest, The Journeyman Project, The Chzo Mythos, Zork, etc. – definitely will show up at some point. But there are a lot of single and double page articles that I’m not entirely sure I can find a spot on the site without placing it together with larger articles. Like, maybe one day you might see the Bill & Ted article here if we do a big blowout on Bill & Ted games (there are more than you’d expect!), and there are a lot of really unique or overlooked games that will probably be posted as well, but otherwise a majority of those will probably stay exclusive to the book.

Why isn’t this book in color? I would totally buy it if it was in color.

Price. The retail cost is $27 for a 772 page black and white book. Through the same publisher, a color printing would have to be split in two books costing over $60 each, which is completely unfeasible. However, the Kindle version is in color, as long as your device can support it (the PC Kindle Reader, iPod Touch, iPhone, iPad, etc.).

Defining the scope was the hardest part of this project. When this all started, our initial plan was to cover the “best of” adventure gaming. This included the entirety of LucasArts and Sierra, since they were by far the most popular, but I also wanted to include the works of Legend, since they were incredibly overlooked and their library is excellent. I had also wanted to include some of the better regarded series and games, like Broken Sword, Simon the Sorcerer, and The Last Express. Trying to figure out what as “significant” slowly turned into “whatever I could fit”, although we had some ground rules. In defining “graphic adventure”, we took that to mean any game that had an interface that did not solely rely on text. This mostly meant anything that used a point-and-click interface, though there are numerous exceptions, like the AGI-era Sierra games.

Originally I’d wanted to include games from all eras, but decided to focus on the “golden age”, running from the release of King’s Quest in 1984, up until roughly 2000. However, we still featured a number of newer games, mostly ones that had thematic ties to older titles, including Strong Bad’s Cool Game for Attractive People (which has a whole episode devoted to old school adventure games), Secret Files (obviously inspired by Broken Sword), A Vampyre Story (developed by a LucasArts vet), Gray Matter (designed by the writer of Gabriel Knight) and a few others. I also included Runaway, which is a series that’s often suggested for fans of old LucasArts games, as well as Syberia, which is relatively popular too, and Limbo of the Lost, because it’s the most derided game in adventure gaming history. We also stuck in a few of the best recent indie titles as well.